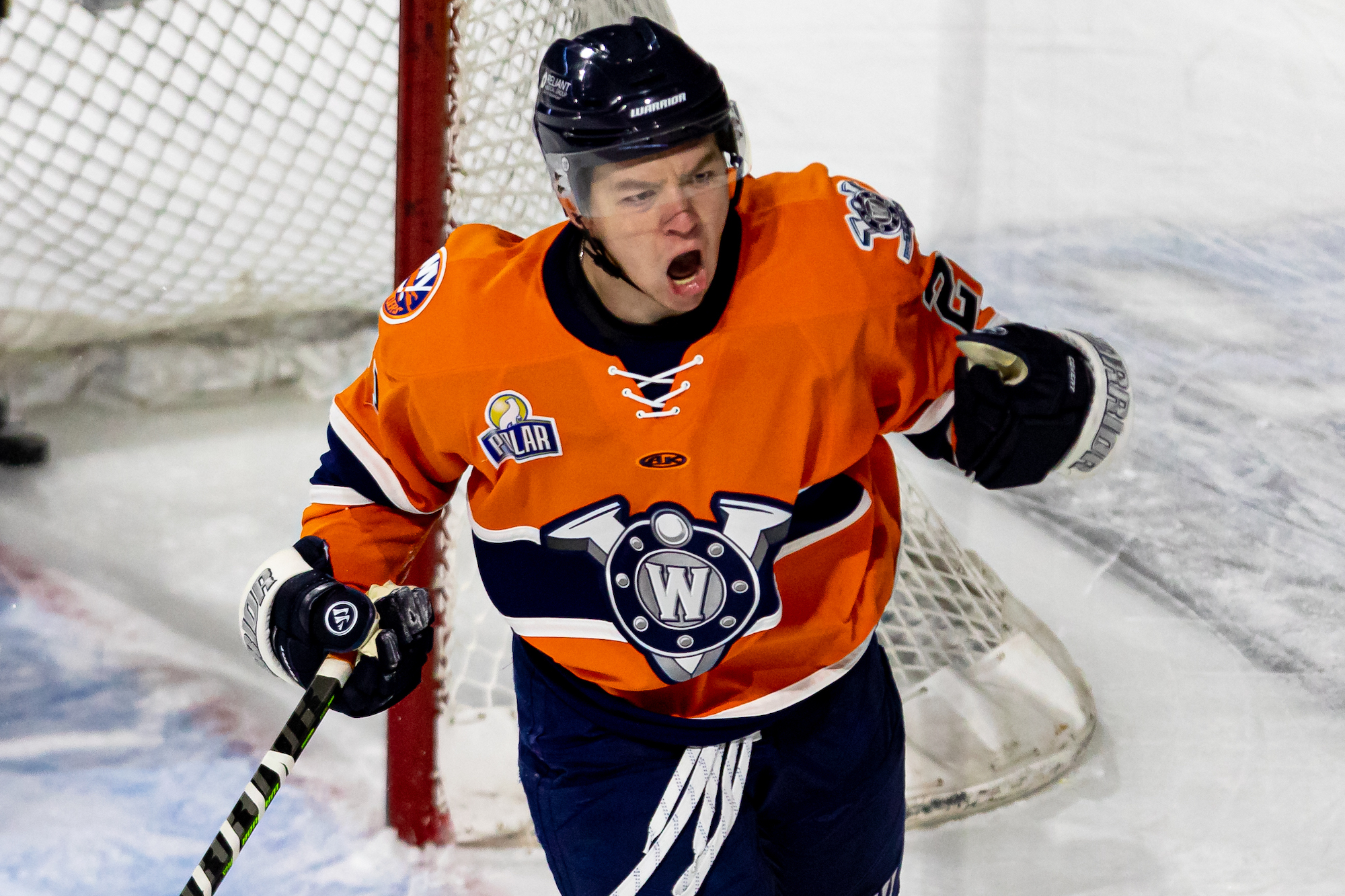 By Bill Ballou
WORCESTER – Through the years, the Railers have played a lot of games with the Newfoundland Growlers they’d love to forget.
They’ve also played a couple they’ll never forget like their 4-3 overtime victory at the DCU Center Wednesday night, a triumph that extended their winning streak to six games and left them undefeated.
Newfoundland was also 5-0-0 going into the night.
Initially, Worcester had seemed to snatch defeat from the jaws of victory, blowing an early 2-0 lead. Then, with goalie Ken Appleby on the bench for an extra skater, Anthony Repaci made it 3-3 with 48 seconds left in the third period.
Collin Adams won it at 2:50 of overtime.
Adams made a three-zone rush down the left wing and beat Growlers goalie Dryden McKay with a high shot from the bottom of the circle.
“I saw it was a forward (defending),” Adams said, “and I knew I could try to beat him wide and I put the puck up there and tried to get it on net. I saw their goalie drop to the butterfly so I knew I had to try to get the puck up.”
Adams also assisted on Repaci’s goal. It was a high one-timer from the top of the circles, set up when Brent Beaudoin won a faceoff cleanly.
It was an especially sweet comeback considering how Worcester had frittered away its lead. Nolan Vesey and Reece Newkirk scored goals in the first period and the Railers carried a 2-0 edge into the second 20 minutes, but the Growlers took over at that point.
Tyler Boland scored at 5:54 of the second period and it was 2-1 going into the third. Brett Budgell tied it at 8:01, then Nathan Noel scored what seemed like a backbreaker at 13:06 as he came out of the penalty box and beat Ken Appleby on a shorthanded breakaway.
The Railers were not deterred.
They pulled the goalie and for just the third time in franchise history it turned a likely loss into a victory. The Railers played the overtime period almost perfectly.
“It definitely gave us momentum,” coach Jordan Lavallee-Smotherman said of Repaci’s goal. “When you give up a goal like that, you’re dejected, especially after scoring as late as they did to go ahead.”
Worcester has matched the longest winning streak in franchise history. The Railers won six straight in the final days of the 2017-18 season during their playoff run.
The city record is eight in a row, done by the Sharks in January of 2015.
The Railers seem to have a shot at that given that their coach thought that while the outcome was perfect Wednesday night, his team’s game was not.
“I think we can do better,” Smotherman said. “I don’t think that was our best performance. We had moments in the game when we were at our best, but I thought that we should have known that in the second they were gonna come out hard.”
The Railers scored first for the fifth time in their six games with Vesey getting his second of the season at 11:01 of the first period on a backhander. Newkirk scored a bit more than a minute later, at 12:22, set up by Blade Jenkins. Newkirk skirted the front of the net and created some room between McKay and near post. Newkirk then slid the puck just over the goal line and in off the far post.
Boland scored his fifth of the season at 5:54 after Newfoundland had put a lot of pressure on Appleby. The goal was a no-chancer as Boland was alone in the bottom of the right circle and snapped it home before the Railers goalie could get over.
The Growlers’ two goals in the third seemed like it would make it 22 wins in 27 games against Worcester overall, but it was much better late than never for the home team this time around.
MAKING TRACKS_Appleby remarkably has a winning record versus Newfoundland at 3-2-1. That means all other Railers goalies are 4-16-1 against the Growlers. … The homestand continues with three games versus the Norfolk Admirals. The teams play morning, noon and night — almost. Saturday is a 7:05 start, Sunday a 3:05 game and Tuesday a school event with the puck drop at 10 a.m. Norfolk is one of those cities that has played against all three Worcester teams — IceCats and Sharks of the AHL and the Railers. They beat the Admirals, 6-1 in their previous meeting on March 9, 2019. Former Sharks defenseman Nick Schaus is skating with Norfolk. … Newkirk’s goal came 4 on 4, the first one of the season by the Railers. … Attendance was 2,507.
#AllAboutTheW
https://railershc.com/wp-content/uploads/2022/11/5L0A1772.jpg 1333 2000 admin /_media/2021-22/logo.png admin2022-11-02 23:15:032022-11-03 00:15:00Late Game Heroics Help to Keep Railers Undefeated at 6-0