Congratulations to Scott Johnson, the winner of the #whatsmyname Mascot Naming Contest.  Scott was the first to suggest the name TRAX, the winning name selected for our Railers HC Mascot! 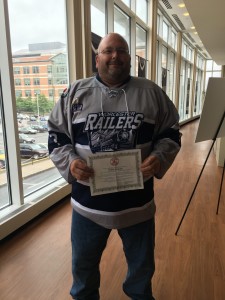 If I could install a new tradition I think the Railers should have a theme song played prior to the start of a period. Similar to the Red Sox having Sweet Caroline

Q4. If you were NHL commissioner for a day, what would you do?

If I were NHL commissioner for a day I would like to see all teams bring back their throwback jerseys for an entire season.