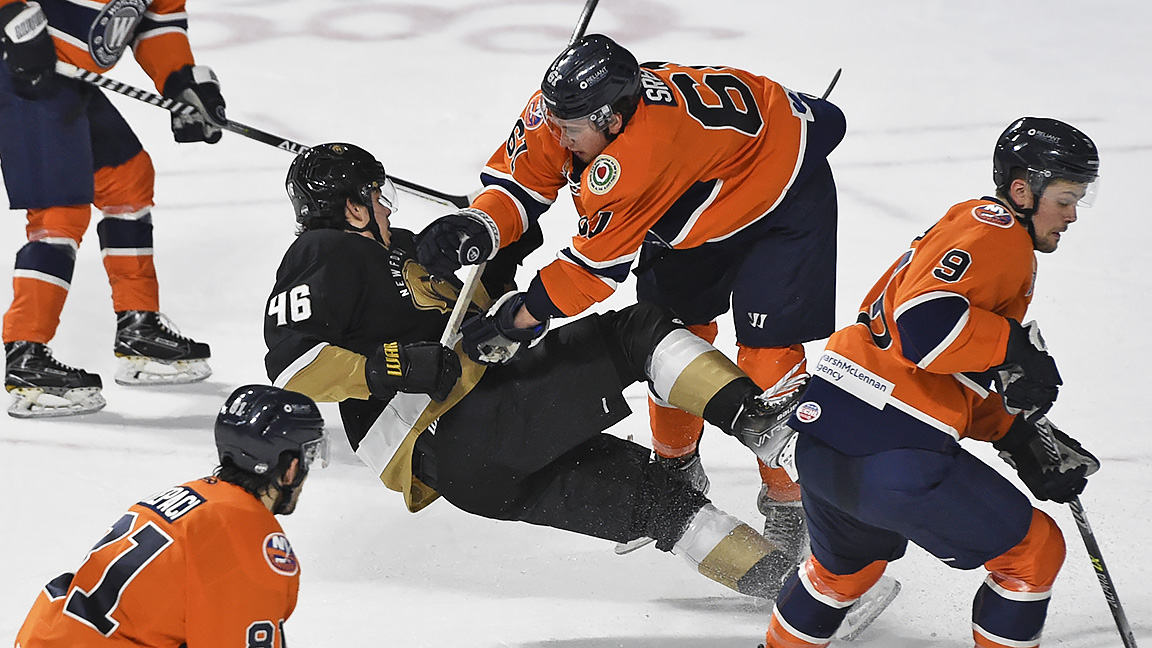 WORCESTER, MASS – The Railers beat Newfoundland by a goal Saturday night, 4-3, and lost to the Growlers by a goal Sunday afternoon, 3-2.

Saturday night Worcester played before more than 8,700 fans. Sunday, the crowd was 3,231 — a nice one for Sunday afternoon — but it also included 51 goals, 58 assists and 109 total points of Railers forwards.

Cunniff rested veterans Jordan Lavallee-Smotherman and Bobby Butler as well as dynamic forwards Jacob Hayhurst and Cole Coskey. The team is about to embark on an inhuman eight-game road trip, one that has Worcester playing five games in six days starting Tuesday in Reading.

That gives the Railers one day off after finishing this 3 in 3.

“Every single game is important,” Cunniff said. “We go by winning percentage so we can’t afford to throw any games away. We have to try to win. That said, we brought in two guys to potentially give us depth this weekend.”

With the keep-them-healthy scratches, Worcester’s top goal scorer in the lineup was Blake Christensen. He scored the game’s first goal, his 17th of the season.

They trailed, 3-1, heading into the third period and got a shot in the arm when Reece Newkirk scored at 3:11. He was set up by the two newcomers, Max Newton and Steve Jandric, both picking up their first professional points.

The third period was the best of the day for Worcester. The Railers had several good scoring chances after Newkirk’s goal but Growlers’ goaltender Hayden Lavigne was very good. He stopped Nolan Vesey on a breakaway at 5:40, made a great glove save on Anthony Repaci from 20 feet at 8:50 and snared Charlie Spetz’ high wrister from the left at 13:30.

“I thought the guys really competed,” Cunniff said of his lineup. “They gave us a chance.”

The Railers will travel to Reading Monday and play a pair of Covid makeups there on Tuesday and Wednesday. Next weekend is another 3 in 3 with a pair of games in Glens Falls, then a Sunday one in Reading. Worcester will not play again at the DCU Center until April 6.

The newly signed Newton and Jandric are both 24, and made their pro debuts Sunday. Newton was 14-24-38 in 35 games this season and was signed to standard contract. Jandric was 8-20-28 in 34 games and is here on an Amateur Tryout.

Worcester scored the game’s first goal, usually a good sign, but not this time.

Christensen got his 17th at 3:58, snapping a rebound past Lavigne. He was assisted by Ethan Price, notching his first professional point, and Mitchell Balmas. Christensen has been on fire. He has goals in four straight games totaling five, with three assists as well.

Balmas has seven points in seven games with Worcester.

Things deteriorated in the second part of the period, though.

Tristan Pomerleau put a 20-footer through Colten Ellis’ 5-hole at 12:13, Orrin Centazzo scored on a rebound at 15:07 and Riley McCourt had a killer goal at 17:54 when he stuffed in a rebound from outside the left post.

That turned out to be all the Growlers needed, but just barely.

MAKING TRACKS_ Good to see Norm Benoit, the DCU Center Supervisor of Off-Ice Officials through the IceCats years and into the Sharks, at the game. … The Railers have only three more home games in the regular season but two are against Trois-Rivieres, so Sunday was not the last performance of “O, Canada” here. … Liam Coughlin remained on injured reserve along with Grant Jozefek. … Newfoundland leads Worcester all-time, 15-5-2. That includes 8-4-0 at the DCU Center. … The loss snapped the Railers’ season-best winning streak at five. … The Growlers are Lavigne’s fourth ECHL team this season and Sunday was his debut in a Newfoundland uniform.