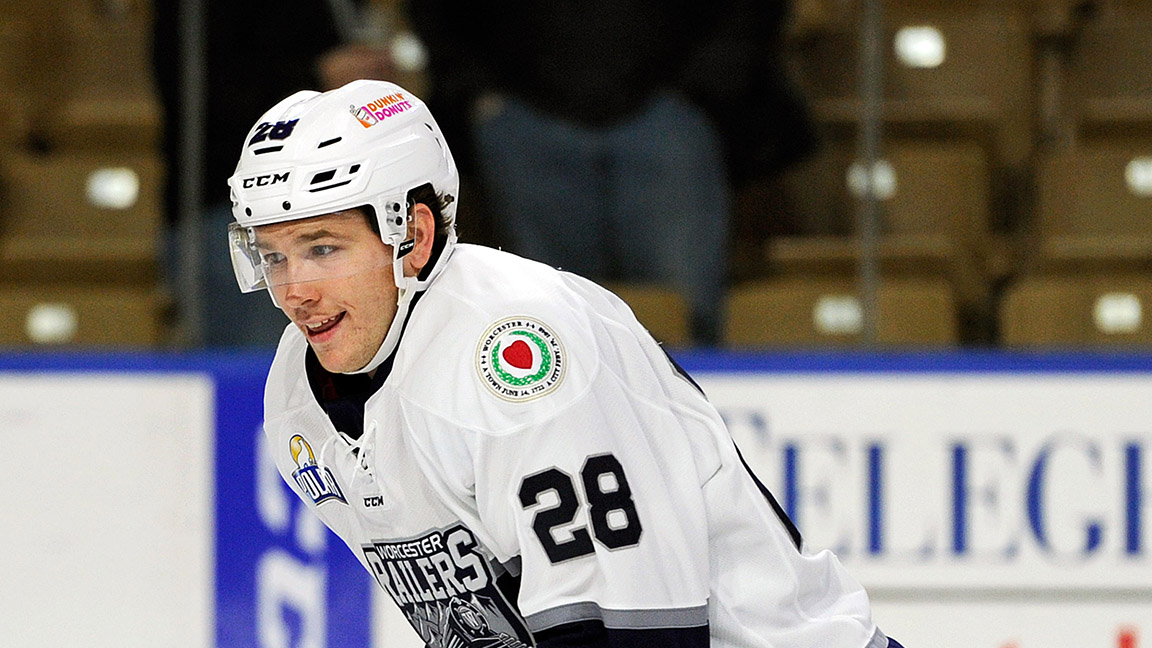 Worcester Railers third year defenseman, Connor Doherty, has earned everything he accomplished thus far in his hockey career. A native of Holden, MA, Doherty played junior hockey with the Boston Jr. Bruins at the nearby New England Sports Center in Marlborough, MA. During his time with the Jr. Bruins, he got recruited to play college at UMass Amherst. However, his time at UMass was short lived as he left the school in 2012 before the start of his second semester of his freshman season.

“I was recruited by a different coaching staff and that summer I was going in was when they had the coaching switch, so it was a whole new coaching staff,” Doherty said. “At that point halfway through my freshman season, I knew it wasn’t going to be a good fit.”

Doherty left UMass questioning whether he was good enough to play at that level and thinking maybe all of it was a fluke.

At that point, he decided to return to the Jr. Bruins to finish the year playing junior hockey where he knew a lot of the guys on the team. From there, he played one more year with the Jr. Bruins and went on to win the USPHL Premier Championship. Winning a championship after contemplating the future of his hockey career took some pressure off the 6 foot 2 defenseman.

During that same season, Doherty found a new home to play college hockey with the Sacred Heart Pioneers down in Fairfield, CT.

“It happened towards the end of the season,”he said. “I got a call from Scott McDougall, an assistant coach at Sacred Heart who had seen me play with the Jr. Bruins. I went down for a visit and after seeing the campus and talking with the coaching staff, it was a no brainer I wanted to be a Pioneer.”

Doherty would go on to play three seasons at Sacred Heart from 2014-17, playing 99 games accumulating 21 points (7-14-21) and serving as an alternate captain his senior season. It wasn’t just what he did on the ice at Sacred Heart that stood out to people but, more importantly, it was what he did off the ice.

“He was the type of guy you wanted on campus,” Pioneers assistant coach Scott McDougall said. “He was always the first one to volunteer for any community events. He fit in right away and all his quality attributes made him an easy kid to root for.”

Upon graduating in May of 2017 with a degree in finance, Doherty was left feeling uncertain about his next step in life.

“Oddly enough, I was actually applying for finance jobs in the Boston area and then I got a call from Railers General Manager/Head Coach Jamie Russell saying that they were interested in me and wanted me to come to training camp and tryout,”Doherty said.

The Railers were gearing up for their first season of play, and Russell had been busy recruiting players to field a team. He saw a number of Sacred Heart games and was intrigued by Doherty. Russell ultimately decided to offer him the opportunity to tryout.

“I talked to him and had seen him play in college and thought he had a lot of potential, but we could not guarantee him a spot,” Russell said.

Once he found out that he would be trying out for the Worcester Railers, Doherty put the job search on hold and spent the summer training with Jeff Oliver, Head Strength and Conditioning Coach at Holy Cross. He also worked some hockey camps around the area. Although he would just be trying out, Doherty prepared like he was going to be playing a full season.

“I was definitely nervous going into it and didn’t know what to expect,” he said. “After day one it was kind of just play hockey and do what I can because realistically, what did I have to lose?” 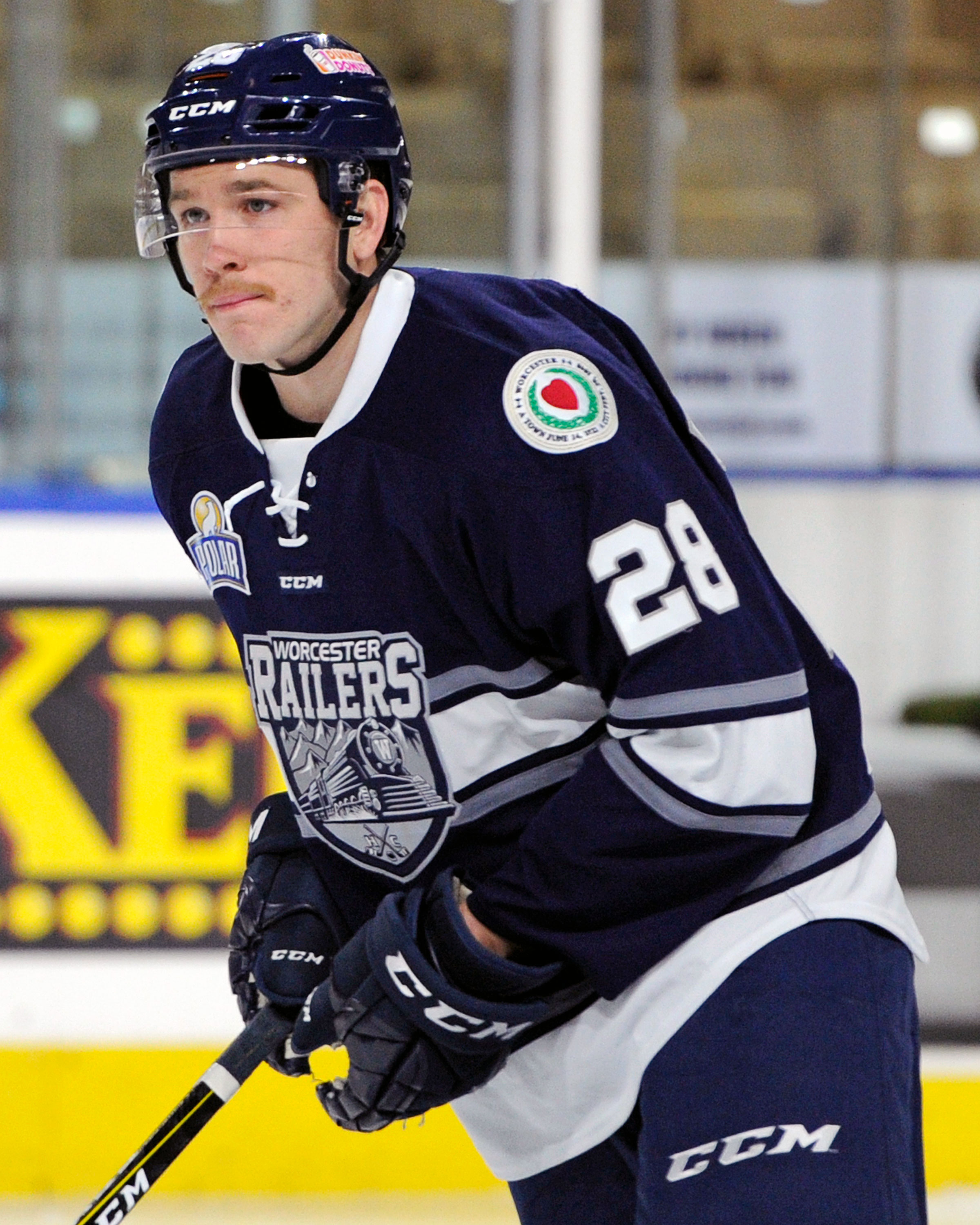 The Railers coaching staff was impressed with how the defenseman preformed during training camp and offered him a spot on the 2017-18 roster.

Fast forward two seasons, and Doherty has accumulated many accolades in his time so far with the Railers, including winning the PHPA Best Defensive Defenseman in the Eastern Conference of the ECHL and being nominated for the ECHL Community Service Award in 2018-19.

Dating back to his first training camp with the Railers Doherty always felt comfortable on the ice and credits hard work to helping him win the PHPA Best Defensive Defenseman in the Eastern Conference of the ECHL.

It wasn’t just on the ice where Connor Doherty was successful. He was the go-to Railers player for community events last season. He worked closely with Community Relations Manager, Paul Harris, appearing at a variety of events such as Skate to Success, reading programs, non-profit visits, and Booster Club events. In addition, Doherty has volunteered at both Railers library renovation projects, reading to students at Lake View Elementary’s library unveiling and helping to paint Vernon Hill’s library during our second renovation. As a result of his charitable work, he was chosen as the 2019 Worcester Railers HC Man of the Year.

In his first two seasons of professional hockey, Doherty has played 92 games accumulating 14 points (2-12-14) along with 135 PIMS. As Doherty gears up for his third professional season, he will have even more confidence after attending his first AHL Training Camp with the Bridgeport Sound Tigers in September. In his one pre-season game with the Sound Tigers, Doherty netted Bridgeport’s only goal in a 2-1 loss to the Hartford Wolfpack and believes that sticking to his game will help him in his third year with the Railers.

“I want to keep playing the same game and stick to what I have been doing in previous years,” Doherty said. “I’m looking to help the team defensively and any offense I add is a bonus. I know the game a little better, so I definitely want to be a leader with some of the younger guys.”

Russell and the rest of the Railers coaching staff is very proud of what Doherty has accomplished and how he has evolved over the years.

“Every year he has become more confident in his abilities and playing with an edge,”Russell said. “He has developed into one of the best shutdown defenders in the league and one that opponents do not want to face.”

From earning a tryout with the Worcester Railers in 2017, being voted best defensive defenseman in the eastern conference of the ECHL in 2019, to then receiving an invite to the Bridgeport Sound Tigers Training Camp it has already been quite the journey for Doherty. The sky is the limit for the Holden, MA native.