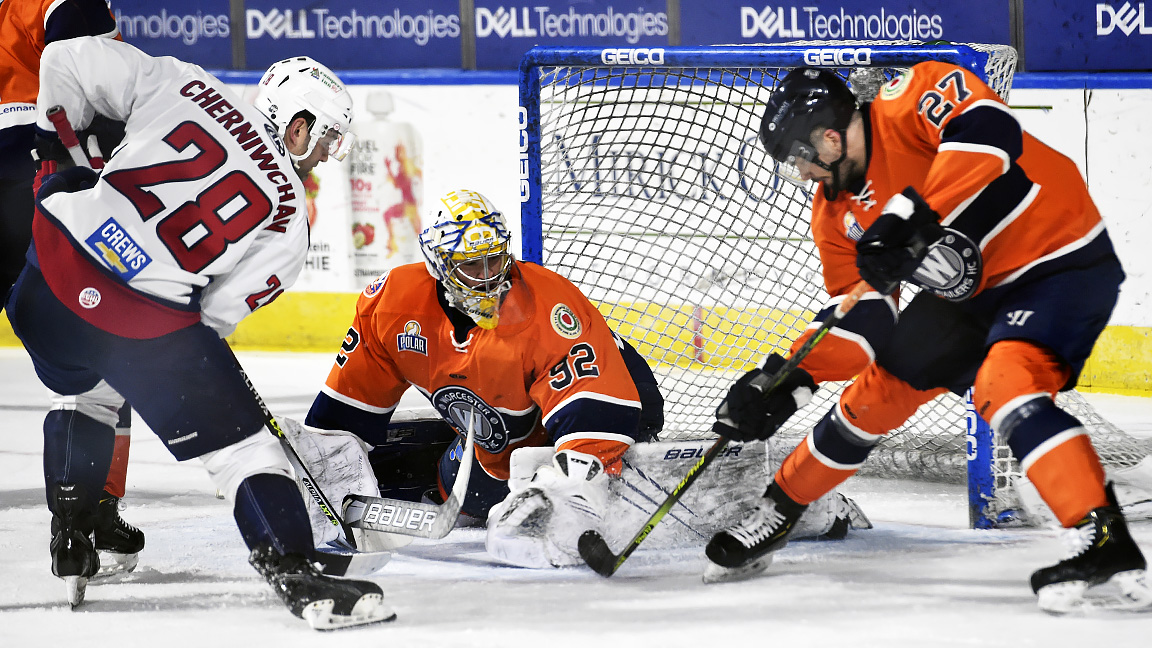 WORCESTER, MASS – It was two streaks down and one streak up for the Railers Friday night as they blanked the South Carolina Stingrays, 3-0, with Colten Ellis recording his first professional shutout.

The streaks were 94 games between shutouts overall, 96 at the DCU Center.

Ellis made 23 saves. Just eight came in the first 40 minutes, then the Stingrays got desperate in the last 20 and fired 15 pucks on net.

Offensively, Worcester got another big night from Blake Christensen. He had a goal and two assists, setting up Reece Newkirk and Jacob Hayhurst for their goals.

Sometimes, goalies can be lulled to sleep by inactivity, which is good if that means their team is scoring bunches of goals. Worcester had only two, though, until Christensen hit an empty net in the last minute. That was because South Carolina goaltender Hunter Shepard was spectacularly good.

Ellis was ready for the third period onslaught.

The streak the Railers extended was the most important one. Worcester has won four in a row to maintain its spot as the third-place team in the North Division. The Railers are 15-5-4 in their last 24 games to climb from sixth place to third.

The victory also snapped Worcester’s streak of never having beaten South Carolina. The Railers had been 0-4-1 all-time versus the Stingrays and 0-3-0 at the DCU Center.

Christensen has goals and points in three straight games at 4-3-7 and is 6-3-9 in his last five. He has developed a remarkable knack for scoring at critical times, like Friday night’s empty-netter. Christensen has 16 goals for the season, 10 in the third period.

It took the Railers just 6:25 to create a 1-0 lead as Newkirk notched his eighth of the season with a sizzling wrist shot from between the circles. Christensen set him up with a precise pass from the left boards.

Hayhurst, who had multiple great chances throughout the period, made it 2-0 at 12:06. Christensen was the setup man once again with Myles McGurty adding an assist. Hayhurst converted a pass from behind the net for his 13th.

The shots were 19-5 for the period and if not for Shepard Worcester might have had a 5-0 lead. The Railers controlled play in the second period as well but their chances were not as good as in the first and the Stingrays went into the final period with a chance to win a game they probably had no business winning.

“Their record isn’t very good,” coach Dave Cunniff said of the opposition, “but they’re in every game. I knew going into it that we were going to have to work for it. I’m not surprised it was a two-goal game.”

Throughout the year, Cunniff has had high praise for his goaltending and Friday night was more of the same.

“For a young guy, it’s really impressive to see him keep his focus,” he said. “He didn’t get a lot of chances in the first two periods, and then in the third we gave up some opportunities. For him to still be dialed in doesn’t surprise me because he’s a great goalie.”

Worcester returns to divisional play Saturday and Sunday with games here against the powerful Newfoundland Growlers, always one of the best teams in the ECHL. This season is no different and the Growlers head into the games winners of four in a row and 8-2-0 in their last 10.

They have dominated the Railers through the years, going 14-5-2 versus Worcester including 7-3-0 at the DCU Center. This looks like a different Railers team from previous seasons, though. The next two games might show just how different.

MAKING TRACKS_ Mitchell Balmas went up to Springfield while Felix Bibeau who was assigned here. Bibeau’s return meant that there were six Railers in the starting lineup Friday night who played for Worcester on opening night in Maine on Oct. 22. The other five were Nolan Vesey, Connor McCarthy, Jordan Smotherman, McGurty and Anthony Repaci. Bibeau was hurt on what looked like a freak play in the last minute and had to be helped off the ice. … McGurty was plus-3 and is plus-13 in his last 15 games.