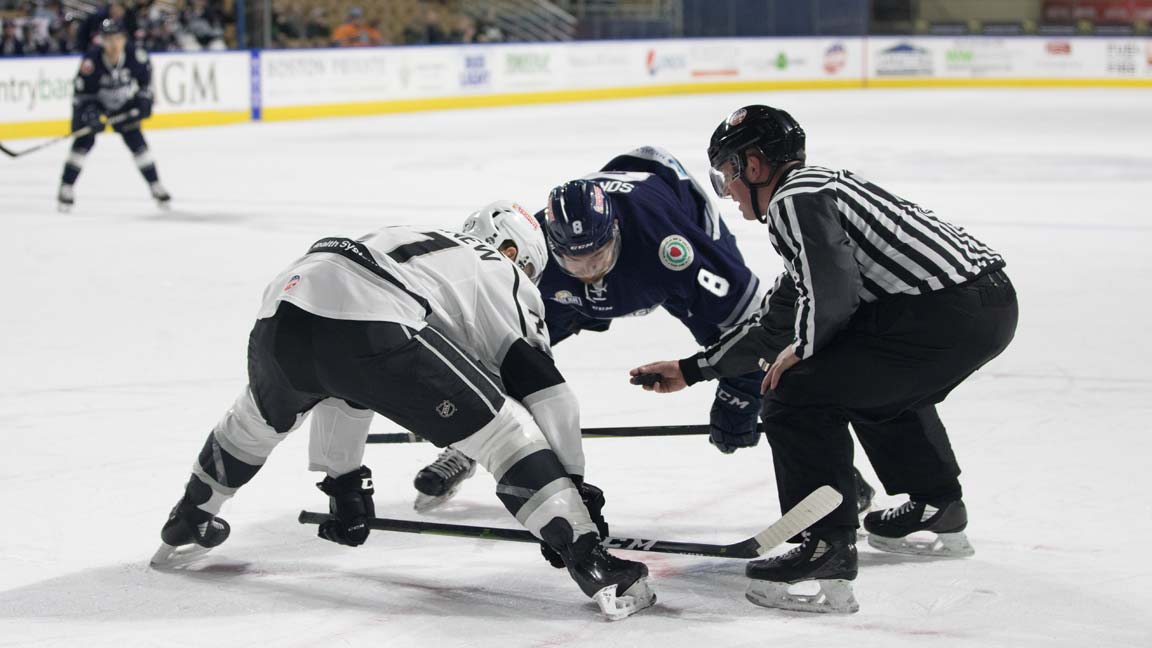 Meeting 3 of 12 vs. Manchester this season

WORCESTER, MA – The Worcester Railers HC(11-11-3-0, 25pts) kicked off a busy three game homestand with a huge second period to pick up a 3-2 win over the visiting Manchester Monarchs (11-10-1-1, 24pts) in front of 2,673 fansat the DCU Center on Wednesday evening. The Railers and Monarchs do battle again on a 2-3-4 Friday at the DCU Center on Sing with Santa Night on Dec 14 with the Price Chopper Market 32 Canned Food Drive.

Barry Almeida, Connor Doherty, and Josh Holmstrom all scored for Worcester in the second period while Mitch Gillam won his fourth straight start in net, and his 13thstraight overall start on home ice dating back to March 2 of last year, as he made 21 saves.  Ryan MacKinnon added two assists as the Railers outshot Manchester 36-23 in the home victory.

It was a fast paced first period of play as the Railers drew three power plays but came up empty in the opening frame.  Worcester outshot Manchester 9-6 in a scoreless opening 20 minutes and Connor Doherty dropped the mitts with Craig Wyszomirski after a hit at center ice by Michael Doherty at 13:56.

Worcester exploded for three goals on 21 shots in the second period and even found the back of the net on the power play.  Barry Almeida (9th) gave Worcester a 1-0 lead with his one-timer from the right circle lit the lamp after a great cross ice feed from Ryan Hitchcock at 3:52. Manchester tied the score just 43 seconds later after Nic Pierog (11th) rushed down the right wing side, cut across the top of the crease and sent a backhander past Mitch Gillam at 4:35. Connor Doherty (1st) kept in a clearing attempt at the left point and sent a quick wrist shot that surprised netminder Chris Driedger at 6:56.  Worcester would strike on their 5thconsecutive power play as Josh Holmstrom (7th) batted in a loose puck on top of the crease after the initial shot by Nick Sorkin was stopped at 19:22 to give Worcester a 3-1 lead into the second intermission.  Worcester held a 30-13 shot advantage through 40 minutes of play.

Manchester had a charge in the third period and would get within a goal with an unassisted tally by defenseman Chris Carlisle (1st) at 14:53. The Monarchs would have a late power play opportunity and would pull the goaltender for the extra attacker, but Mitch Gillam made a fantastic toe save with 62 seconds left to seal the 3-2 home victory.

Notes: Three Stars: 3rd star: Ryan MacKinnon (0-2-2) 2nd star: Barry Almeida (1-0-1, 8 shots) 1st star: Connor Doherty (1-0-1) …. final shots were 36-23 in favor of Worcester…. Chris Driedger (5-3-0) made 33 saves on 36 shots for Manchester…. Mitch Gillam (6-6-0) made 21 saves on 23 shots for Worcester…. while Evan Buitenhuis served as the backup…. Worcester went 1-for-5 on the power play while Manchester went 0-for-1…. Tommy Kelley (inj), Tyler Mueller (inj), Kyle McKenzie (inj), Austin Block, Matt Schmalz, and Malcolm Gould (inj) did not dress for Worcester…. Jeff Kubiak is currently on recall with the Bridgeport Sound Tigers…Worcester improves to 7-3-3-0 at home this season…. Eric Cairns from the NY Islanders was in attendance…Mike Cornell picked up a fighting major in the second period vs. Eric Schurhamer….Barry Almeida fired eight shots on goal.

What’s on tap?….Railers have BUSY WEEKEND!

On Friday, Dec 14 the Railers host the Manchester Monarchs at 7pm on a 2-3-4 Friday on Sing with Santa Night.  Fans are encouraged to support the Price Chopper Market 32 Canned Food Driveto benefit the Worcester County Food Bank – all fans that donate will have the opportunity to win prizes. Santa Claus will join local choruses to sing holiday songs during the first intermission.  Enjoy $2 popcorn, $3 soda, and $4 Bud Lights in the Bud Light Lounge every Friday game. The first 1,000 fans will receive a BOGO burrito offer courtesy of Chipotle.

On Saturday, Dec 15 the Railers host the Maine Mariners on Teddy Bear Toss Night on a BIG GAME SATURDAY.  Worcester will wear a special UGLY SWEATER jersey to benefit the Shine Initiative presented by Fidelity Bank.  Fans are encouraged to bring a new teddy bear to throw on the ice after the Railers score their first goal of the game with all teddy bears donated to local charities.  The ugly sweater jerseys will be auctioned off throughout the game to benefit the Shine Initiative. Every Saturday night home game is SATURDAY NIGHT SIGNINGSpresented by MidState Auto Group with a Railers player signing autographs during the second intermission.