Eric Lindquist checking back in!  A lot of good has gone on since we last chatted….so here is a quick recap:  The Railers reached the 1,000 membership plateau, daylight savings time kicked in, Rene Rancourt will be attending our membership holiday party, the Railers Foundation donated $10,000 to the Worcester Telegram & Gazette Santa Fund, TRAX hung out with David Ortiz, and the Foundation hopes to donate another $100,000 to the Santa Fund through a membership drive this holiday season!  We are less than 11 months away from opening night and things are really starting to pick up! 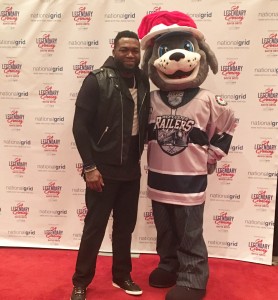 As of 1pm on November 15, we currently have 1004 members on board for our inaugural season – which means the Founder’s Circle is all wrapped up!  However, the Railers Foundation has teamed up with the Worcester Telegram & Gazette Santa Fund for a Holiday Power Play!  For every new membership deposit between now and Jan 15, the Railers Foundation will donate $200 to the Santa Fund…. the goal is 500 new memberships for a $100,000 donation!  For more information on the Holiday Power Play please click HERE.

In case you missed…. Boston Bruins anthem singer Rene Rancourt will attend the members only holiday party as Mezcal on December 12.  Rene will sing both anthems at Mezcal before the Bruins play the Canadiens on TV that night!  Make sure to wear your ugly sweater for a chance to win club level Bruins tickets!  More info on the holiday party click HERE!  Also at the party, Director of Memberships Mike Fisher will let everyone know about the select-a-seat process….. don’t forget that Sharks season ticket holders will have the opportunity to save their old seat locations!  Hope to see many of you on the 12th!

Former Worcester Sharks forward Freddie Hamilton has played six games this season with his younger brother Dougie as a member of the Calgary Flames…. former Sharks captain Jay Leach is now an assistant coach with the Providence Bruins….. Travis Oleksuk played over 200 games in Worcester but is now a teammate of Brodie Reid with the Bolzano HC in the Austria League.

The Florida Everblades have started the season with a 10-0-1-0 start to lead the ECHL…. the Tulsa Oilers are a perfect 9-0-0-0 at home this season but just 2-3-0-0 on the road…. The Norfolk Admirals have really struggled out of the gate with a 1-7-3-0 record through 11 games – ouch! Tough guy Derek Mathers has nine fighting majors through 11 games played with the Allen Americans…. Justin Buzzeo leads the ECHL with 20 points (7-13-20) through 14 games with Atlanta…  The Manchester Monarchs have the best power play in the ECHL with a 25.0% ranking…. Toledo leads the ECHL in goals per game (4.08) while Rapid City has allowed the most per game (4.23).

I can’t believe Thanksgiving is next week…. GOBBLE GOBBLE GOBBLE!… Happy belated Veteran’s Day to Railers account executive Tym Dore, not only is Tym a veteran of the Marine Corps he also has fascinating stories about sauerkraut.  That will do it….  If you have a question…. shoot me a line at EricL@RailersHC.com.  Until next time…. HOCKEY, HOCKEY, HOCKEY…WOO!