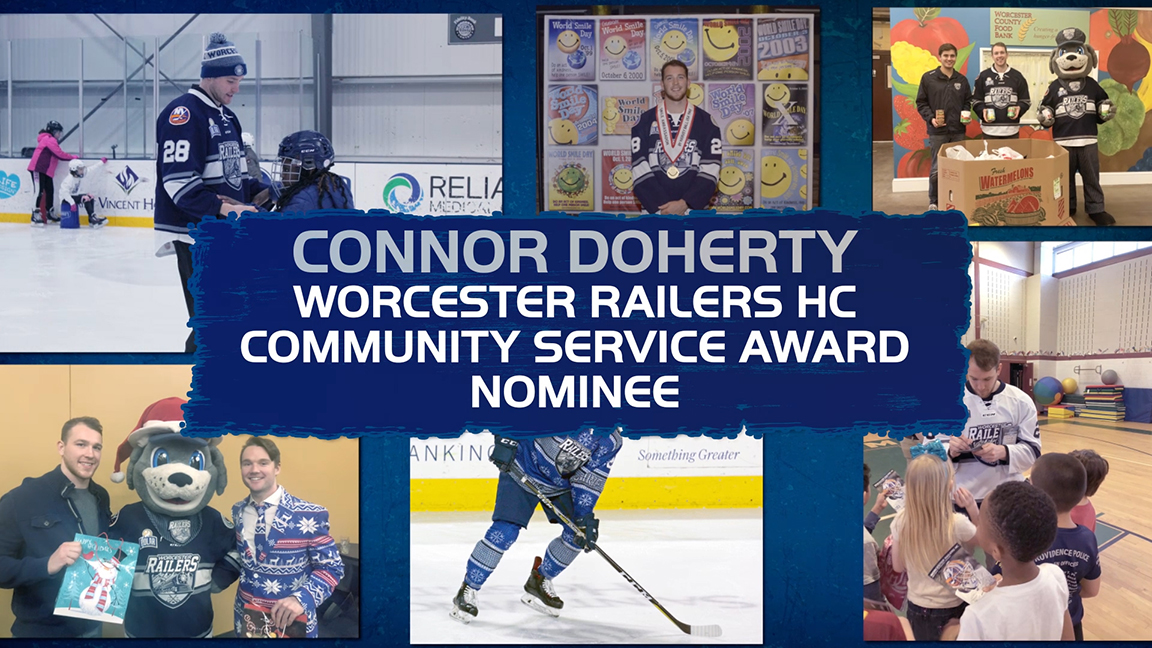 Connor Doherty has been selected as a nominee for the ECHL’s Community Service Award in recognition of his commitment on being an active member of the greater Worcester community. Connor took the lead in helping the Railers make a huge difference in the Worcester community this year.

“The Worcester Railers take great pride in being a huge part of the Central Massachusetts community,”said Harris. “Connor has been extremely active from day one and has led by example going above and beyond with his commitment to assisting the Railers HC community initiatives.”

The second-year pro graduated from Sacred Heart University in 2017 and hails from Holden, MA.

Doherty was instrumental in participating in learn to skate and reading programs, nonprofit volunteering, event fundraising, library renovations, and booster/fan events. Some notable events that Connor participated in this season include the Friendly House Thanksgiving Food Drive, Adopt A Student Charity Golf Tournament, and the Harvey Ball.

Doherty made the biggest contribution to the Worcester community through his efforts with the Railers flagship community program Skate to Success which brought over two thousand Worcester Public School fourth grade students to the Fidelity Bank Worcester Ice Center where they were taught to skate by players and coaches, fed lunch from Nonna’s Pizza & Pasta, and received autographed Railers folders with giveaways.

Connor quickly became a fan-favorite in Worcester and is always one of the most celebrated players in the high-five tunnel and always approachable at member events.

Adirondack’s James Henry was selected as the recipient of the 2018-19 ECHL Community Service Award.

On Saturday, April 6, the Railers host the Newfoundland Growlers at 7pm on Fan Appreciation Night presented by MGM Springfield. Doors will open at 3:30pm for the Boston Bruins Alumni game to benefit Why Me.  The first 3,000 fans will receive a Pawtucket Red Sox flex voucher good for any April home game and the first 1,000 fans will receive a $2 Mass State Lottery Scratch Ticket. As with every Saturday night Railers home game, Railers player(s) will sign autographs during the first intermission presented by MidState Auto Group. There will be a ton of in-arena giveaways and prizes throughout the game.   The Railers will host a jersey auction at the game through the Handbid App for the orange third jerseys with fans having the opportunity to receive the jersey right off the players back on the ice during a postgame ceremony.  In addition, Railers full season members will receive 25% off all purchases on Railers merchandise at the game with your member card.