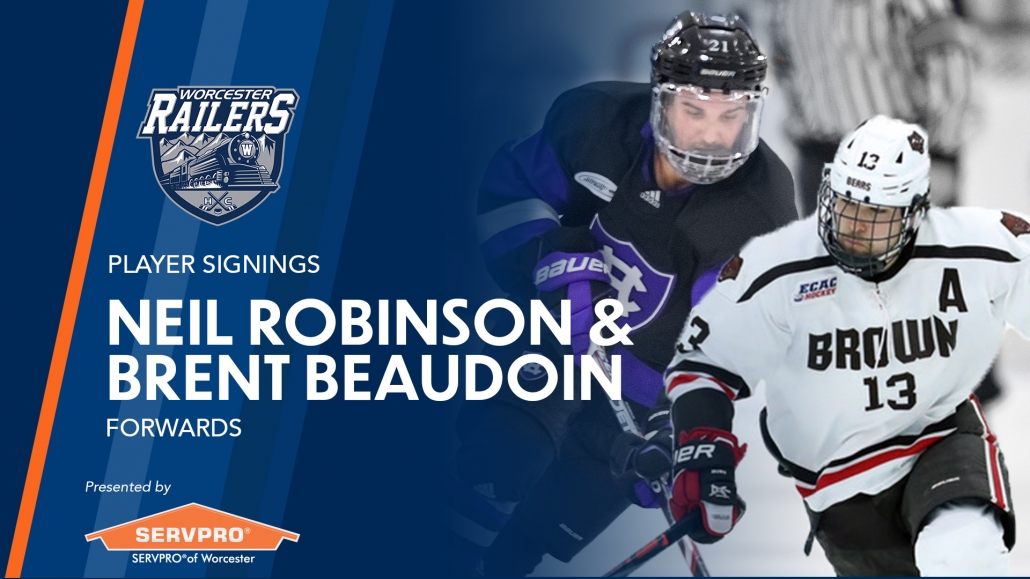 Brent Beaudoin is entering his rookie season after spending the last four seasons at Brown University, accumulating 60 points (24 goals, 36 assists) in 127 career games. The 5-foot-10, 180lb forward finished second in scoring for the Bears during his senior year, notching 14 points (seven goals, seven assists) in 31 games and also served as an assistant captain. The Londonderry, NH native signed an ECHL contract with the Railers this past March. He made his professional debut on Mar. 10, 2019, helping lift the Railers to a 5-4 win over the Adirondack Thunder by scoring a goal and an assist en route to being named the number one star of the game. Prior to his time at Brown University, Beaudoin played for the Islanders Hockey Club in the USPHL Premier and spent five seasons with the New Hampshire Jr. Monarchs. He spent the 2014-15 season with the Monarchs in the Eastern Hockey League (EHL) where he was named an EHL First Team-All Star, finishing third in the league in scoring with 56 points (21-35-56) in 43 games.

Neil Robinson is entering his rookie season after spending the last four seasons at the College of the Holy Cross, tallying 45 points (18 goals, 27 assists) in 93 career games. The 5-foot-11, 184lb forward is coming off his most productive season in college, leading the Crusaders in scoring with 23 points (10 goals, 13 assists) in 36 games. Prior to college hockey, the 24-year-old played two years in the Central Canada Hockey League (CCHL), totaling 101 points (54 goals, 47 assists) in 105 games. During the 2015-16 season while playing for the Brockville Braves, he ranked second in the league with 39 goals. The Pointe-Claire, Quebec native also won back-to-back New England Championships with the Salisbury School in 2013 and 2014.

“Brent was a player that we were able to get into a game last year before the season got cancelled and we were very impressed with his play,” Cunniff said. “He’s a very smart hockey player that can help in all phases of the game. Neil had a very successful four years at Holy Cross for Coach Berard. He’s a guy that can be relied on in any situation as well. Both of these guys play a 200 foot game and should play a big role for us this upcoming season.”

All player signings this offseason are brought to you by  SERVPRO of Worcester, with more announcements expected over the next few weeks. Click HERE  for the most up to date roster.

McGuire Wire – August 29 – A Week in Review
Scroll to top