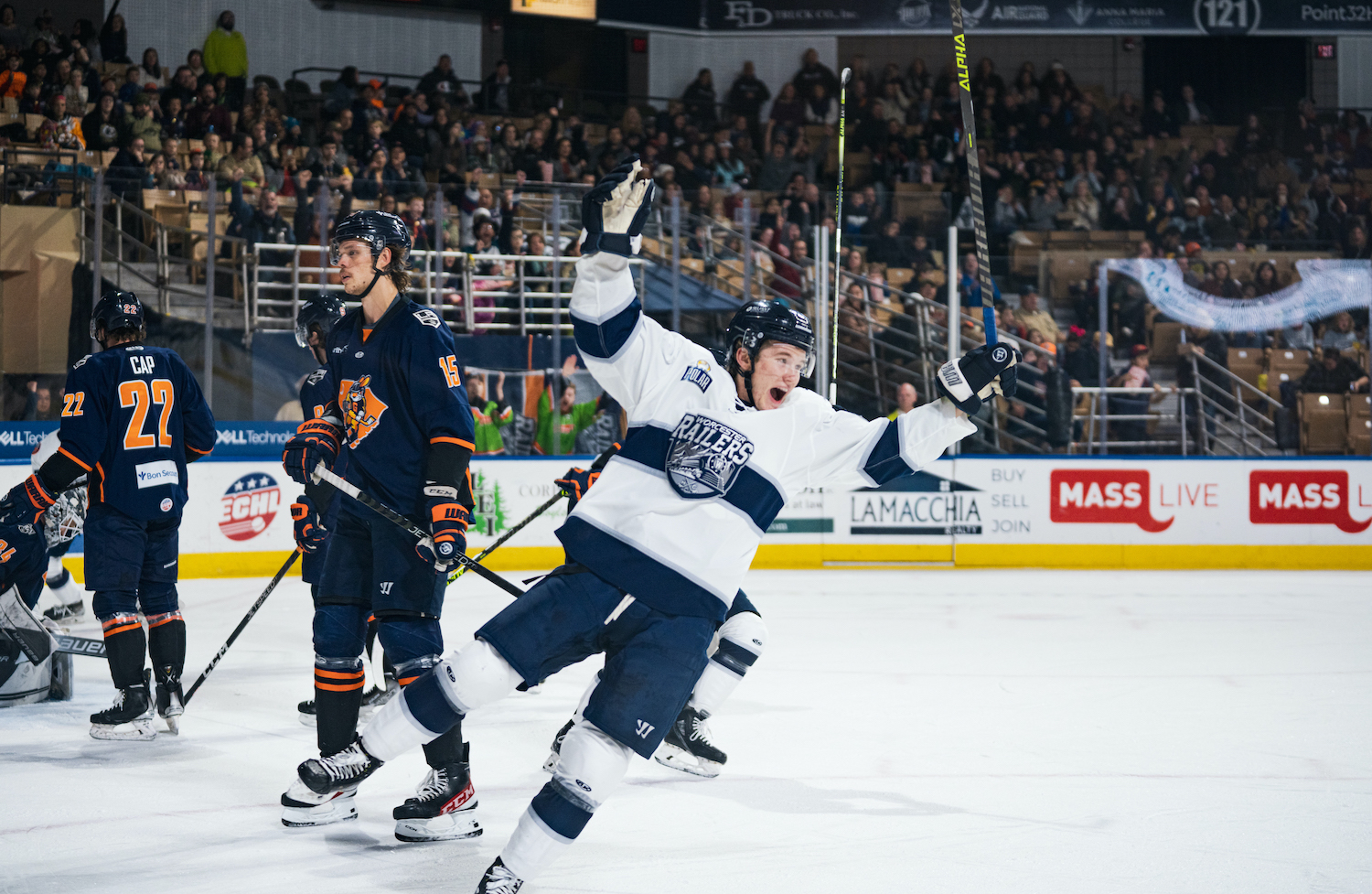 WORCESTER – Perfect games are a baseball thing but the Railers pitched one anyway Saturday night.

Seven different players scored goals, 10 had assists and rookie goaltender Henrik Tikkanen stopped 41 shots as Worcester pummeled the Greenville Swamp Rabbits, 7-0. It was the most lopsided shutout in franchise history and tied the team record for biggest margin of victory.

With several of their best players on recall, or injured, the Railers came up with their best game of the season.

“It was, absolutely,” coach Jordan Smotherman said. “From the drop of the puck the guys bought into the way we want to play hockey. We saw things tonight we’ve been talking about all year that they’d been a little resistant to do and I think they saw the benefits tonight of doing it right.”

In order, the goal scorers were Jimmy Lambert, Bobby Butler, Connor McCarthy, Brent Beaudoin, Blade Jenkins, Nolan Vesey and Quinn Ryan. Jenkins had a pair of assists as did Reece Newkirk (not to mention his second fighting major of the season).

In a 7-0 outcome, goaltending might seem irrelevant but Tikkanen was tremendous as the Railers were outshot, 41-30. It was first shutout by a Worcester goaltender this season and the first by a Railers goalie since Ken Appleby won, 3-0, at Trois-Rivieres last April 13.

Tikkanen’s finest moments were early in the second period when the Railers had to kill a two-man disadvantage for 1:35. A goal, or two, by the Swamp Rabbits there might have turned things around but Tikkanen made several fabulous stops.

“That was a huge kill for us,” Smotherman said. “I have to credit my assistant coach (Jimmy Sharrow) for that. He works our guys on that 5 on 3 and they did an incredible job.”

It was a great redemptive performance for Tikkanen, who gave up four goals in the first period versus Reading and was pulled.

“He was fantastic,” Smotherman said of his goalie. “He earned that shutout. For him to be about to bounce back like that after Reading and give that performance; he’s an extremely, extremely competitive guy and I said before the game – Teeks is gonna have a heck of a night  because I knew he was (upset) after the other night.”

Shutouts have been hard to come by for Railers goalies in recent years and while they only count for two points they are still special occasions.

“Of course it always feels a little bit better to have the shutout,” Tikkanen said, “but the win is the most important thing and we got that tonight, so that was the best thing. It was really nice to get the chance to start a second game this week, and I’m happy I was able to use the opportunity and get the win.”

With 41 saves on 41 shots, it was a perfect game for Tikkanen and as it turned out, for everyone in a Railers uniform.

MAKING TRACKS – It did not make the box score but credit Railers owner Cliff Rucker with a save. When the staff arrived before the game they discovered there was only one Table Talk Pie stored for the third period culinary contest. Miraculously, Rucker had an extra pie in the trunk of his car and to make things perfect, it was a blueberry. … At 12-2-0, Worcester is 10 games above .500, the first Railers team to ever be that much above .500 at any point in a season. … This was the Railers’ last home game of the month. They embark on a seven-game road trip that includes games against three teams — Norfolk, Newfoundland and Trois-Rivieres. The first three are in Norfolk where the Admirals have endured a nightmare start to their season. They are 1-14-0 and have lost 11 in a row including three straight at the DCU Center in early November. .. With the annual Fire versus Police game as a preliminary, the crowd was 5,623. That put the Railers over the 600,000 mark for home attendance all-time. … Myles McGurty has quietly become the franchise leader in plus-minus. He was plus-1 Saturday and is plus-17 as a Railer. Patrick McNally was the longtime leader at plus-15. … McCarthy’s goal was the first by a Railer wearing Number 2 since Tommy Panico scored on Jan. 25, 2019 in Adirondack. … Worcester is 5-1-0 versus Greenville all-time including 3-0-0 at the DCU Center.