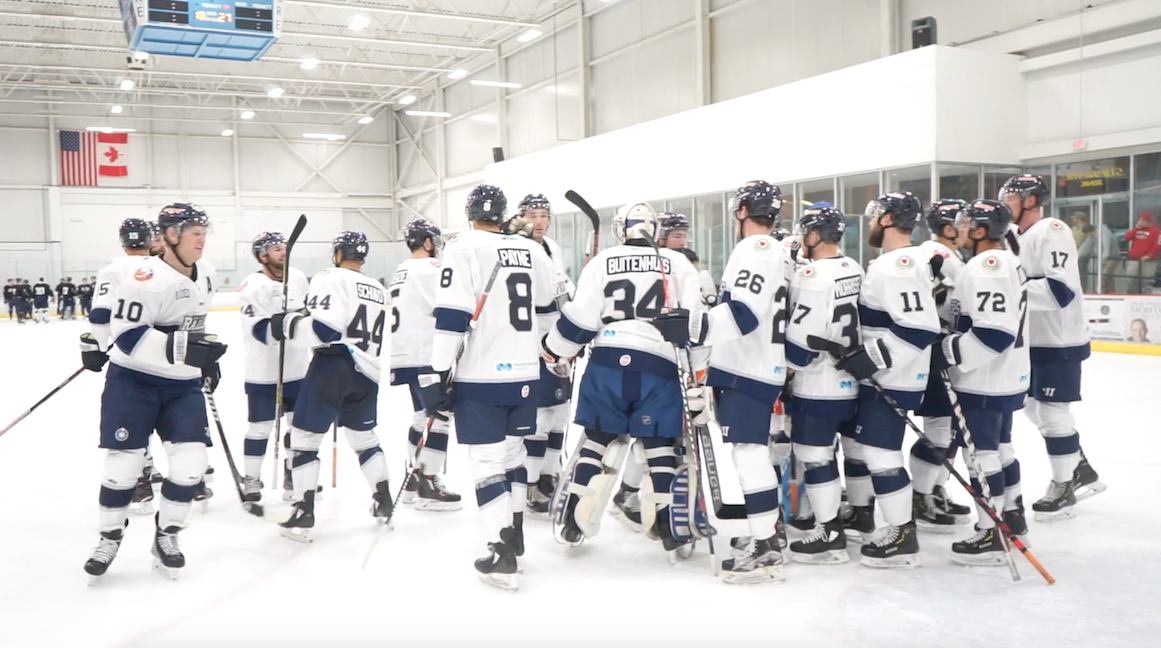 Exhibition Game 1 of 1 for the Worcester Railers HC

Tommy Tsicos, Jason Lavallee, Ivan Chukarov, and Matt Schmalz (1-1-2) scored for the Railers while Jakub Skarek made 16 saves on 16 shots in net through 29:40 minutes of play for the victory. Evan Buitenhuis made 10 saves in 30:20 minutes of play in relief for Worcester while Drew Callin added two assists in the victory.

The Railers took a 1-0 midway through first period thanks to Tommy Tsicos (1st) who was able to bury home a rebound past Francois Brassard after a number of chances. Anthony Cortese and Cody Payne would get credit with the assists on the only goal of the period. Shots were in favor of the Mariners 10-8 through 20 minutes of play as Jakub Skarek was perfect in net.

A three goal second period for the Railers was started by Jason Lavallee (1st) who snuck one past the goalie from the right circle assisted by Ned Lukacevic. Ivan Chukarov (1st) would make it a 3-0 lead for the Railers with a power play goal over the shoulder of netminder Francois Brassard assisted by Matt Schmalz and Drew Callin. Jakub Skarek stopped all 16 shots he faced as Evan Buitenhuis came in at 9:40 of the second period in relief. Matt Schmalz (1st) slammed home a rebound to make it a 4-0 lead at 16:40 assisted by Kyle McKenzie and Drew Callin. Worcester outshot Maine 19-8 in the middle frame and led 27-18 in shots after 40 minutes of play.

The only scrap of the game occurred at 1:04 of the third period as Ross Olsson (1stFM) dropped Ryan Ferrill with a wicked right hand. The only goal of the final frame would come from the Mariners at 9:45 as Dawson Leedahl (1st) snuck one past the legs of Evan Buitenhuis after a scramble in front of the net to get the Mariners on the board. Evan Buitenhuis shut the door the rest of the way and had 10 saves total in relief as Worcester took home the 4-1 exhibition win to close out training camp.

Notes: Three Stars: 3rd star Jakub Skarek (16 saves, Win) 2nd star: Drew Callin (0-2-2) 1st star: Matt Schmalz (1-1-2)….Final shots were 33-27 favor of Worcester… Francois Brassard (0-1-0) made 18 saves on 21 shots for Maine in 29:40 minutes of play, Daniel Spencer made 11 saves on 12 shots in relief….Jakub Skarek (1-0-0) made 16 saves on 16 shots for Worcester in the 29:40 of play while Evan Buitenhuis made 10 saves on 11 shots in relief in 30:20 minutes of play… Worcester went 1-for-2 on the power play while Maine went 0-for-3…. Anthony Florentino (inj), Jordan Samuels-Thomas, Tanner Pond, Ryan Hitchcock, Barry Almeida, Kyle Thomas, Nic Pierog, Justin Murray, and Connor Doherty did not dress for Worcester…. Bo Brauer wore the “C” for Worcester while Henrik Samuelsson and Kyle McKenzie each wore an “A” for Worcester …Jason Lavallee led all skaters with seven shots on goal… Cody Payne, Jason Lavallee, and Anthony Cortese all finished with a plus two rating.