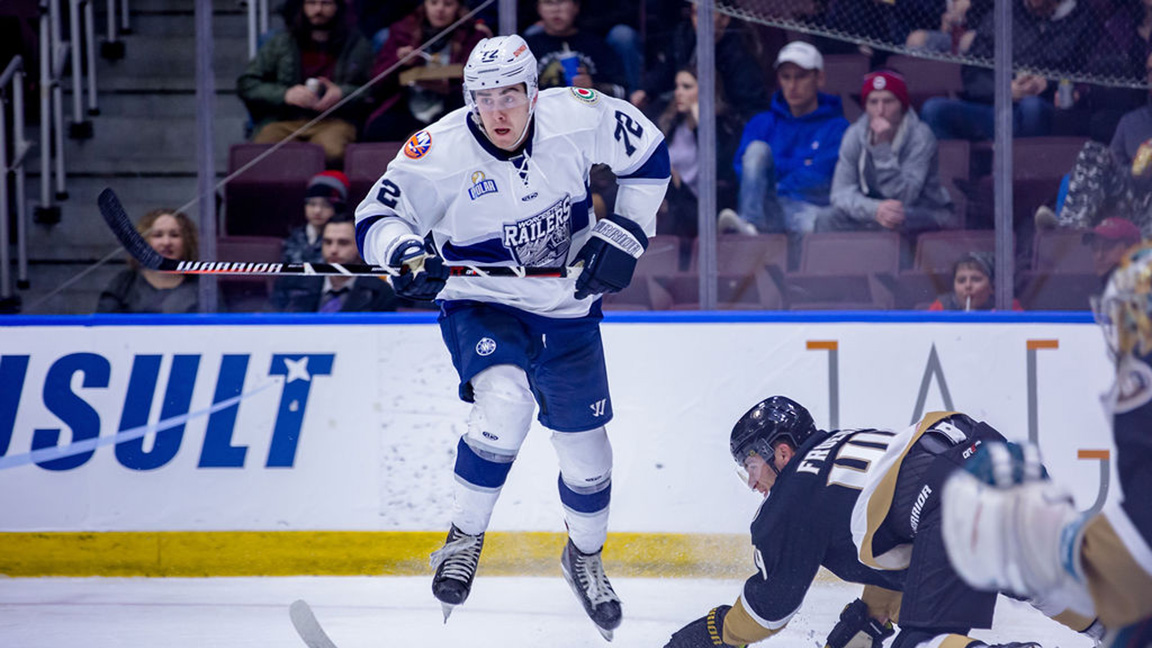 Worcester Railers HC at Newfoundland Growlers
December 31, 2019
Mile One Centre
Meeting 7 of 9 vs. Newfoundland this season
Railers are 1-6-0-0 vs. the Growlers this season

Saint John’s, NFLD – The Worcester Railers HC (10-19-2-0, 21pts) closed out 2019 falling 4-3 in overtime to the Newfoundland Growlers(22-10-0-0, 42pts) in front of 3,665 fans at Mile One Centre on Tuesday. The Railers travel back to Worcester on Wednesday and then will take on the Reading Royals in Reading on Friday and Saturday.

Drew Callin (2-0-2) and Dante Salituro all scored goals for Worcester while Bo Brauer (0-2-2) added two assists. Evan Buitenhuis made 32 saves in net for the loss. Newfoundland made it their 12thstraight win on home ice and trailed 3-1 heading into the third period but received goals from Justin Brazeau and Colt Conrad to force overtime. Zach O’Brien finished off the game with a breakaway goal in overtime while Angus Redmond made 25 saves in net for the win.

Worcester took two penalties in the first period and the Growlers would capitalize on the second one when Marcus Power (15th) tapped home a rebound after Evan Buitenhuis at 14:02 to give Newfoundland a 1-0 lead which they took to the locker room after 20 minutes of play. The Growlers outshot the Railers 14-5 in the first frame.

The Railers came alive in the second period when Jordan Samuels-Thomas led a two on one rush and slid a pass to his right to Dante Salituro (8th) who roofed one over the glove of Angus Redmond at 5:30 tie the game at 1-1 in the second period. Just 15 seconds Drew Callin with a laser from the top of the right circle was to hot to handle as it went blazing by the right shoulder of Redmond giving Worcester a 2-1 advantage. The Railers led 2-1 after 40 minutes of play and outshot Newfoundland 12-11 in the second frame.

Newfoundland was able to score two goals in the third frame one at 6:24 from Justin Brazeau (12th) and then at 14:09 from Colt Conrad (4th) to tie the game at 3-3 and then the two teams headed to overtime.

Zach Obrien (8th) proved to be the hero scoring just 24 seconds into overtime on a breakaway beating Evan Buitenhuis through the five-hole to give Newfoundland a 4-3 win for their 12thstraight win on home ice.

After two games in Reading vs. the Royals to kick off 2020, Worcester returns home on Sunday, Jan 5 as the Railers host the Jacksonville IceMen at 3pm on a KIDS GIVEAWAY SUNDAY with the first 1,000 kids 12-and-under receiving Railers mini sticks presented by AvZ Promotions. Score a SUNDAY FUNDAY ticket pack which includes four tickets and four beverage vouchers (beer/soda) for just $60!

Late Rally Not Enough as Worcester Falls 6-3 in Newfoundland