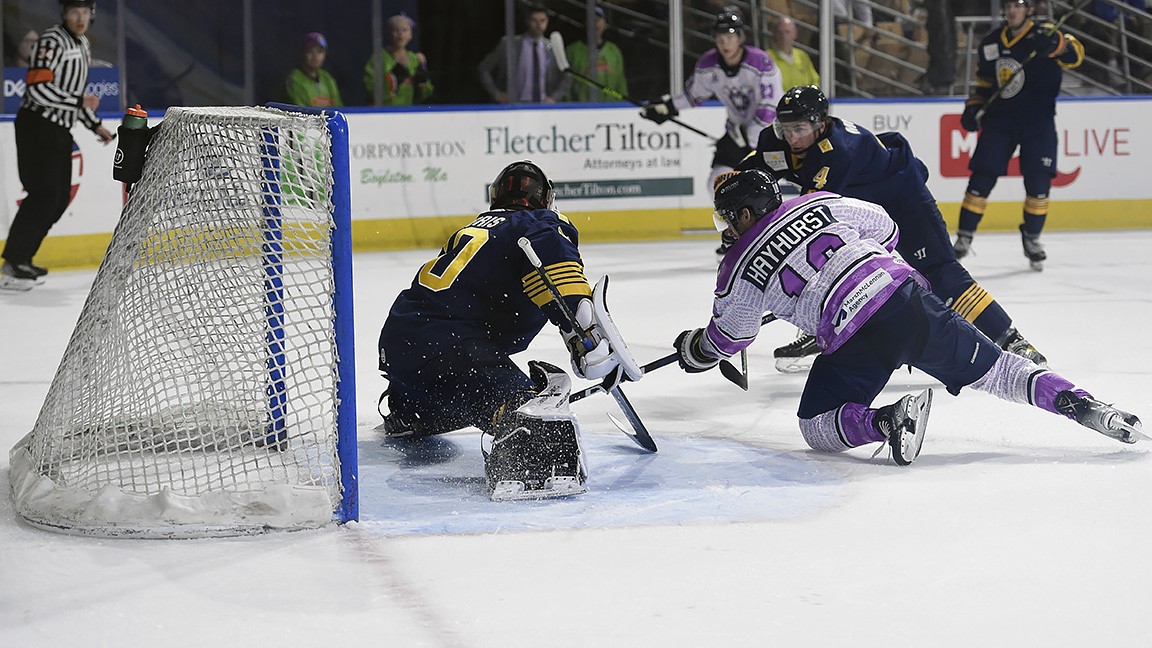 By Bill Ballou
WORCESTER – Ice is not made of paper, which is why the Railers’ seventh straight victory to start the season was such a struggle Saturday night.
They beat the Norfolk Admirals — prevailed is the word, actually — by a 4-2 margin, the last Worcester goal coming into an empty net.
The Railers were a perfect 6-0-0 heading into the game, the Admirals an imperfect 1-5-0. Worcester was at home, etc. The odds were heavily in the  Railers favor but the home team had to come back to win.
“There is no such thing as an easy game in this league,” Worcester coach Jordan Smotherman said. “The difference between top and bottom is not that far, and I think that team caught us off guard and they gave it a heck of an effort.”
The teams play again Sunday afternoon and the Railers have even a little extra incentive. They could tie the city pro record for longest winning streak at eight straight, something the Sharks did in January, 2015. They could also tie the ECHL record for most consecutive victories to start the season.
Jacob Hayhurst, Liam Coughlin, Jared Brandt and Anthony Repaci had the Railers goals, Repaci getting the empty-netter. The other three all scored their first of the season. Brandt’s was his first in a Worcester uniform.
The Railers outshot Norfolk, 39-17, and Admirals goalie Cale Morris was excellent. The Worcester power play was not, though, converting just 1 of 7 chances. That was not entirely the power play’s fault, however.
“I will say it tonight and this is not an excuse,” Smotherman said, “but our ice was terrible. A couple of our turnovers the puck just died on us. There was something about the humidity in the building.
“But that’s not an excuse. We still have to bear down.”
The Railers converted a Norfolk turnover to take a 1-0 lead about halfway into the first period. Jimmy Lambert gained control of the puck along the right boards and spotted Hayhurst alone between the circles.
Lambert’s pass was perfect. Hayhurst had time to make two moves and popped a short backhander home at 9:18.
Worcester squandered a chance or two or three to extend that lead later in the period, though. The Admirals paraded to the penalty box starting at 11:01 and the Railers spent the next 7:20 on a power play of some variety. For 40 of those seconds they had a two-man advantage.
Norfolk took advantage of Worcester’s failure to convert on the power play and went ahead in the early minutes of the second period as Luke Prokop and Joe Widmar scored. Prokop got his first of the season at 1:42 as he beat Henrik Tikkanen to the glove side with a 45-foot snap shot.
The Railers applied more consistent pressure as the period progressed and swarmed all over Morris to no avail. Sure enough, the Admirals finally gained control of the puck and Aidan Brown and Widmar crashed the Worcester zone with a 2-on-1.
Tikkanen stopped Brown’s shot but not Widmar’s rebound. Norfolk had a 2-1 lead at 5:37.
The Railers tied it at 11:48, finally taking advantage of a power play. Coughlin scored his first goal of the season, deflecting Noah Delmas’ shot from about 20 feet out. Worcester continued to pour it on after that but barely missed on a couple of great chances and was denied by Morris otherwise.
Brandt snapped the tie at 2:07 of the third period, sending a 45-footer through a screen and past Morris’ glove. With their speed taking over, the Railers dominated the rest of the period and Repaci finally nailed down the decision at the buzzer.
MAKING TRACKS – The Railers have scored 33 goals in their first seven games, a city record. The 2004-05 IceCats had 29 in their first seven. … Nick Schaus returned to the DCU Center after an 11-year hiatus, playing defense for Norfolk. Schaus made his pro debut for the Sharks late in 2009-10 and spend the entire 2010-11 season in Worcester. His last game here was April 5, 2011. He wore Number 6 with the Sharks and has Number 55 with Norfolk. … The teams play again here at 3:05 Sunday afternoon. …Schaus was not the only Worcester alum in the building. Terry Virtue and Shawn Heaphy from the first IceCats team were on hand as was Mike Mottau from the last IceCats team. … Brandt was plus-3 for the night. … Tikkanen is 3-0-0 and has allowed just five goals in those three games. … Attendance was 4,477.
https://railershc.com/wp-content/uploads/2022/11/thumbnail_1EDIT_RL49295-RICH-LEBLANC.jpeg 648 1152 admin /_media/2021-22/logo.png admin2022-11-05 22:38:372022-11-05 22:41:01Railers Extend Flawless Start to 7-0-0-0, Beat Admirals 4-2