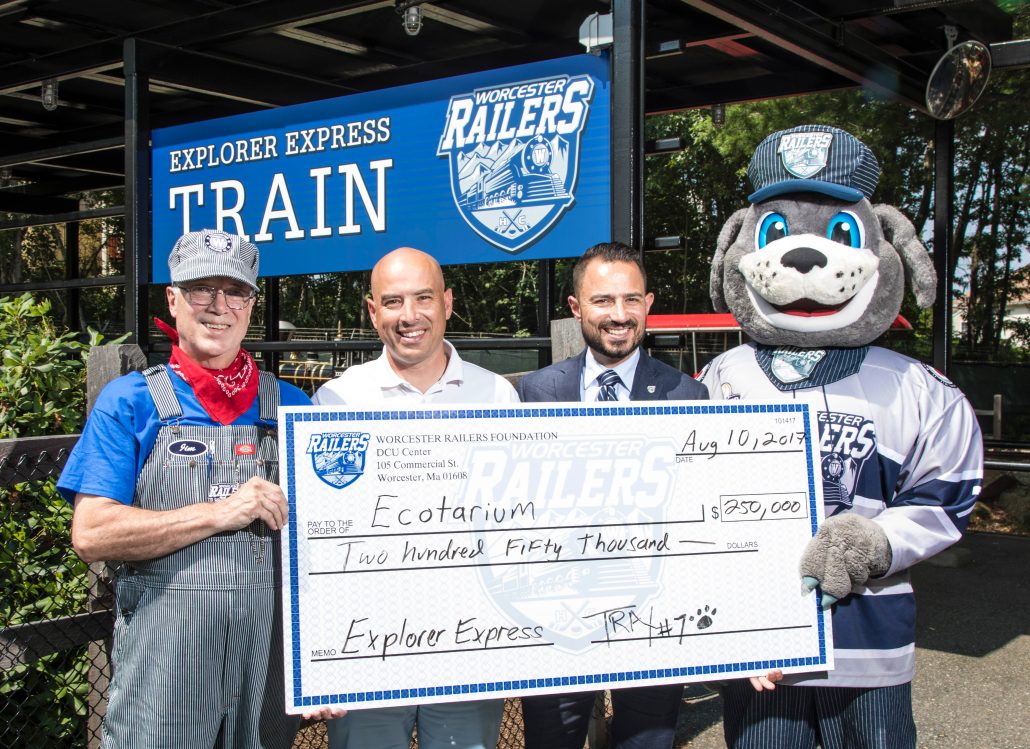 “The Railers are excited to partner with EcoTarium by presenting the Explorer Express Train,” said Michael G. Myers, president of the Worcester Railers HC. He added, “The EcoTarium is a great place for families to enjoy an educational outing right in our back yard and we are happy to be part of that experience.”

Joseph P. Cox, president of the EcoTarium said, “The EcoTarium and the Railers share a common goal of providing wonderful opportunities for families to create lasting memories together. Now, with the Explorer Express Train being presented by the Worcester Railers Hockey Club, these memories will be combined.”

The partnership has enabled the EcoTarium to purchase a new train engine from Chance Rides of Wichita, Kansas. The new engine, number 395, is a replica of the 1863 C.P. Huntington steam locomotive. The Explorer Express Train is a favorite attraction for EcoTarium’s visitors. Open-air passenger cars take visitors on a scenic 12-minute ride; a relaxing and fun way to see the museum grounds. The new engine recently arrived at the EcoTarium and is now in use. Approximately 50,000 passengers ride the attraction each year.

“We look forward to hundreds of thousands of visitors experiencing the new Explorer Express Train presented by the Worcester Railers Hockey Club here at the EcoTarium,” said Cox.

EcoTarium guests will notice the train station has now been “Railerized,” with fresh paint in the blue and gray colors of the hockey club. TRAX, the official mascot of the Railers, assisted the EcoTarium in painting the station. Guests will also notice that the train engineers are outfitted in apparel with the Railers logo.

Along with the presenting sponsorship of the Explorer Express Train, the Railers become corporate members of the EcoTarium, allowing the members of the Railers Hockey Club free admission during the month of September. It also grants the Railers sponsorship of Great Pumpkin Nights, which has become central Massachusetts largest Halloween celebration for families. Both organizations will also work together to cross-promote each other throughout the duration of the partnership.

EcoTarium is New England’s leading museum of science and nature, an indoor-outdoor experience dedicated to inspiring a passion for science and nature in visitors of all ages. Founded in 1825, it has been a leader in informal science and nature education for nearly 200 years, and today welcomes more than 165,000 visitors per year. Highlights of the 55-acre campus include a museum building with three floors of interactive exhibits, the Alden Digital Planetarium: A National Geographic Theater, daily Science Discovery programs, live animal habitats, nature trails through forest and meadow, seasonal narrow-gauge railroad Explorer Express Train, and its expansive interactive outdoor exhibit, Nature Explore®. It also offers a variety of sponsorship, membership, and giving opportunities for businesses and organizations.

The EcoTarium, located at 222 Harrington Way in Worcester, Mass., is open Tuesday through Saturday from 10:00 a.m. to 5:00 p.m.; Sundays 12 noon to 5:00 p.m. General admission is $18 for adults, $14 for children 2-18, $14 for seniors 65+ and students with ID, and children under 2 are free. Planetarium shows and Explorer Express Train require additional ticket. Parking is free. For more information, visit ecotarium.org.

About the Worcester Railers Hockey Club

The Worcester Railers Hockey Club, a proud member of the ECHL, will play their inaugural game at theDCU Center on October 14, 2017 vs. the Manchester Monarchs. Full season memberships, mini plans, and group tickets are on sale now by calling the Railers front office at 508-365-1750 or by visiting RailersHC.com.