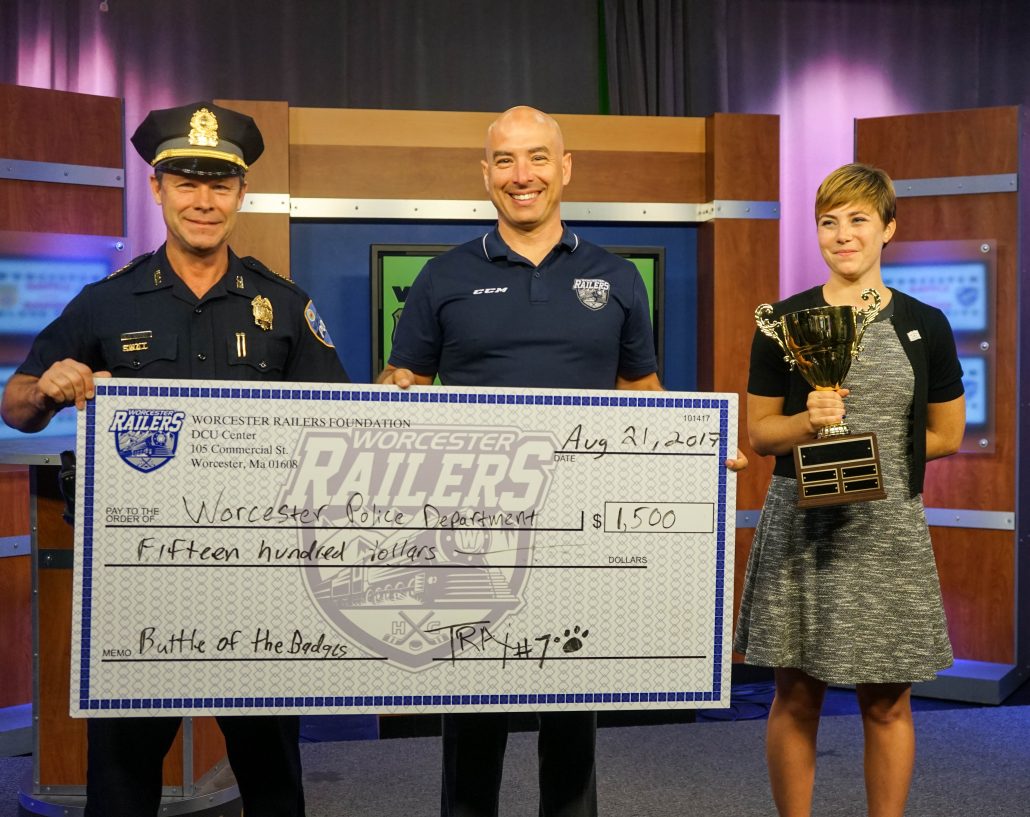 WORCESTER, MA  –  The Worcester Railers Hockey Club (@RailersHC), proud ECHL (@ECHL) affiliate of the New York Islanders (@NYIslanders), in conjunction with the American Red Cross, is excited to report that 216 units of blood were donated during the Battle of the Badges Blood Drive, which was held on Friday, August 18th, at the DCU Center in Worcester, MA.

“The Railers would like to thank all the donors that came out to this record setting blood drive, and all the other partners involved,” said Railers HC president Michael G. Myers. “I would like to congratulate the Worcester Police Department for taking home the first battle of the badges trophy, and the Railers HC Foundation looks forward to making a donation to the Worcester Boys & Girls club in their honor.”

“The Boys & Girls Club is a great organization that the Worcester Police Department is very close to,” said Worcester Police Chief Steven Sargent. “Our officers just did a run to D.C. to raise funding for the Club’s track and field programming, and we think of this as an extension of that.”

“The Red Cross is thrilled with the support we’ve received from the Worcester Police Department, Worcester Fire Department, Charter TV3, Worcester Railers HC, and DCU Center,” said Kelly Isenor, communications manager for the Massachusetts and Connecticut Red Cross regions. “First responders know better than most the need for a full blood supply, and we thank them for rolling up a sleeve and giving the gift of life.”

All presenting donors received a ticket to the Big E festival, as well as a voucher for Disney on Ice at the DCU Center. For more information regarding the Red Cross please visit RedCrossBlood.org or call 1-800-RED CROSS.

About the Worcester Railers HC

The Worcester Railers Hockey Club, a proud member of the ECHL, will play their inaugural game at the DCU Center on Oct. 14, 2017 vs. the Manchester Monarchs. Full season memberships, mini plans, and group tickets are on sale now by calling the Railers front office at 508-365-1750 or by visiting http://www.railershc.com/.