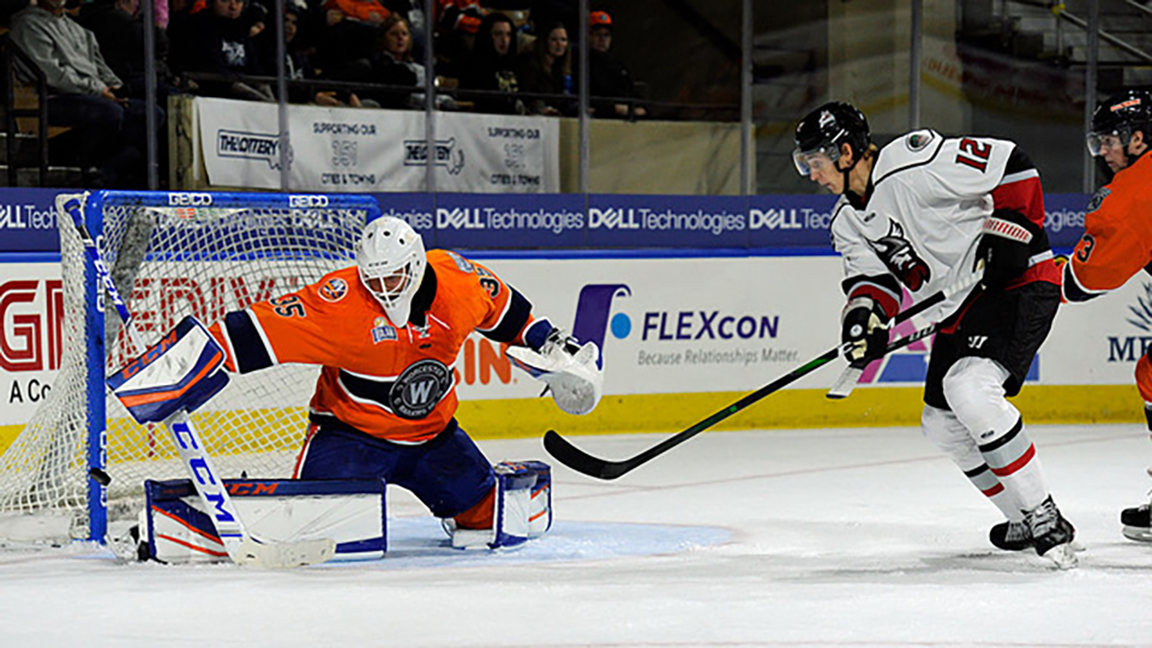 Meeting 1 of 14 vs. Adirondack this season

Worcester, MA – The Worcester Railers HC(1-0-0-0, 2pts)opened up their third season of ECHL action with a commanding 5-1 victory over the visiting  Adirondack Thunder (1-1-0-0,2pts) in front of 8,137 fans at the DCU Center on Saturday evening. The Railers are back in action on Friday, October 18 with a 7pm battle on home ice vs. the Maine Mariners with a Halloween Celebration on a 2-3-4 Friday night.

Worcester came out strong with three first period goals and Kyle Thomas recorded a Gordie Howe Hattrick while 19-year-old Jakub Skarek made 24 saves on 25 shots in net in his first professional start in North America for the Railers.  Jordan Samuels-Thomas (1-1-2), Barry Almeida, Ryan Hitchcock, and JD Dudek (1-1-2) also scored for Worcester in the victory.  Michael McNiven made 26 saves in net for the Thunder and Ryan Walker scored the only goal for Adirondack.

Worcester charged out to a 3-0 first period lead as Jordan Samuels-Thomas (1st) slammed home a rebound after an initial shot by Tanner Pond at 4:10.  Kyle Thomas (1st) gave Worcester a 2-0 lead with a one timer from the right slot past netminder Michael McNiven assisted buy Bo Brauer and Connor Doherty at 7:57.  Barry Almeida (1st) would then strike with a goal on a two man advantage at 11:34 to put the Railers ahead by three.  Kyle Thomas (1stFM) would win a one-sided fight at 17:36 with a series of rights vs. Brent Thompson as everything went Worcester’s way in the opening frame.  The Railers outshot the Thunder 13-3 through 20 minutes of play.

Ryan Hitchcock (1st) jammed home a loose rebound just 19 seconds in the second period with Nic Pierog and Matt Schmalz.  The Thunder finally got on the board after a turnover in the Worcester zone as Ryan Walker (1st) deflected home a score from inside the crease to cut the Railers lead to 4-1. Rookie goaltender Jakub Skarek was sharp in the middle frame with 15 saves as Worcester took a three-goal lead into the second intermission with Worcester holding a 22-19 shot advantage.

JD Dudek (1st) scored his first professional goal ay 5:22 of the third period and Jakub Skarek shut the door the rest of the way with six more saves as Worcester controlled the rest of the game for a commanding 5-1 victory.

The Railers host the Maine Mariners on Friday, October 18 at 7pm on the first 2-3-4 Friday night of the season with an early Halloween Celebration. Enjoy $2 popcorn, $3 sodas, and$4 bud lights in the Bud Light Zone.  Go trick-or-treating on the concourse and enjoy an on-ice costume parade! It is the first INSTAGRAM FRIDAYof the season presented by the EDGE at Union Station – snap a photo and win prizes in the IG Zone!  Tickets start at just $15!

Still and Stir located behind the DCU Center provides hockey fans with a great pregame and postgame atmosphere all season long. Watch all road games broadcast live on ECHLTV.com for a small fee. Listen to all Railers games live on 98.9 Nash ICON with coverage beginning 30 minutes before puck drop with Eric Lindquist and Cam McGuire. Full season memberships, mini plans, and group tickets are on sale now by calling the Railers front office at 508-365-1750or by visiting www.RailersHC.com.

Railers host Mariners on 2-3-4 Friday with an early Halloween Celebration!