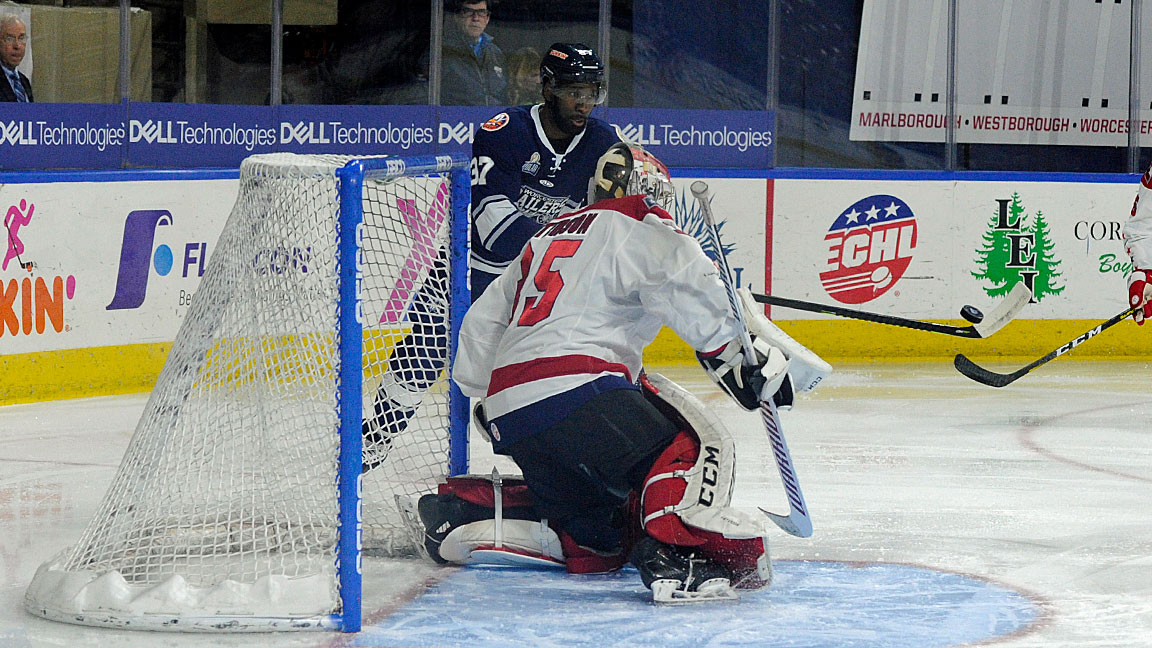 Meeting 1 of 1 vs. Allen this season

Barry Almeida scores his 50thgoal as a worcester railer

Worcester, MA – The Worcester Railers HC (8-16-1-0, 17pts) scored three straight goals in the third period but lost a nail bitter 5-4 to the Allen Americans (20-5-3-0, 43pts) on Wednesday evening in front of 2,002 fans at the DCU Center. The Railers hit the road for a pair of games vs. Brampton on Friday and Saturday before the holiday break.

Jordan Samuels-Thomas (1-2-3), Kyle Thomas (1-2-3), and Ryan MacKinnon (0-2-2) all recorded multi-point performances while Evan Buitenhuis made 18 saves in net. Captain Barry Almeida scored his 50thgoal as a Worcester Railer while Shane Walsh also added a goal. Allen had five different goal scorers while Tyler Sheehy (0-2-) extended his point streak to nine games. Jake Patterson made 39 saves in net for his 11thwin of the season.

Worcester took two penalties in the first period and were successful in killing off the first one with plenty of short-handed chances but it would be Jack Sadek (3rd) who banked one of the skate of a Railers play from below the right circle with just 13.6 seconds left to give Allen a 1-0 lead which they took into the dressing room. Shots were even at 9-9 through 20 minutes of play.

Allen grabbed the first two goals of the second period in a span of 3:44 started by Jared Van Wormer (9th) who redirected a shot off of a blast from the point courtesy of Stepan Falkovsky at 14:08 to give the Americans a 2-0 lead. Coming out of the penalty box Alex Breton (4th) went in on a breakaway and went forehand back hand before sliding it through the wickets of Evan Buitenhuis to increase the lead to 3-0 at 17:52. In the dying minute of the second period Ryan MacKinnon cranked one on net from the right point with Jake Patterson making the initial save before Jordan Samuels-Thomas (11th) smacked home the rebound with just 51 seconds left in the period to cut the deficit to 3-1. Worcester went into the locker room down 3-1 but outshot Allen 19-8 in the second stanza for a total of 28-17.

After allowing back to back goals and falling down 5-1 with goals at 5:24 and 6:17. The comeback would begin for the Railers. After a great individual effort from Jordan Samuels-Thomas short-handed Kyle Thomas (7th) was able to find a rebound in the left circle zipping it past Jake Patterson at 7:18 cutting the deficit down to 5-2. On the power-play at 14:14 Barry Almeida sent one past Patterson to make the game 5-3. Just 40 seconds later Shane Walsh (4th) made things interesting as the game was down to a one goal game at 5-4 but despite pulling the goaltender and multiple good chances in the final minutes the Railers fell 5-4.

Holiday Shopping at the Rail Shop!