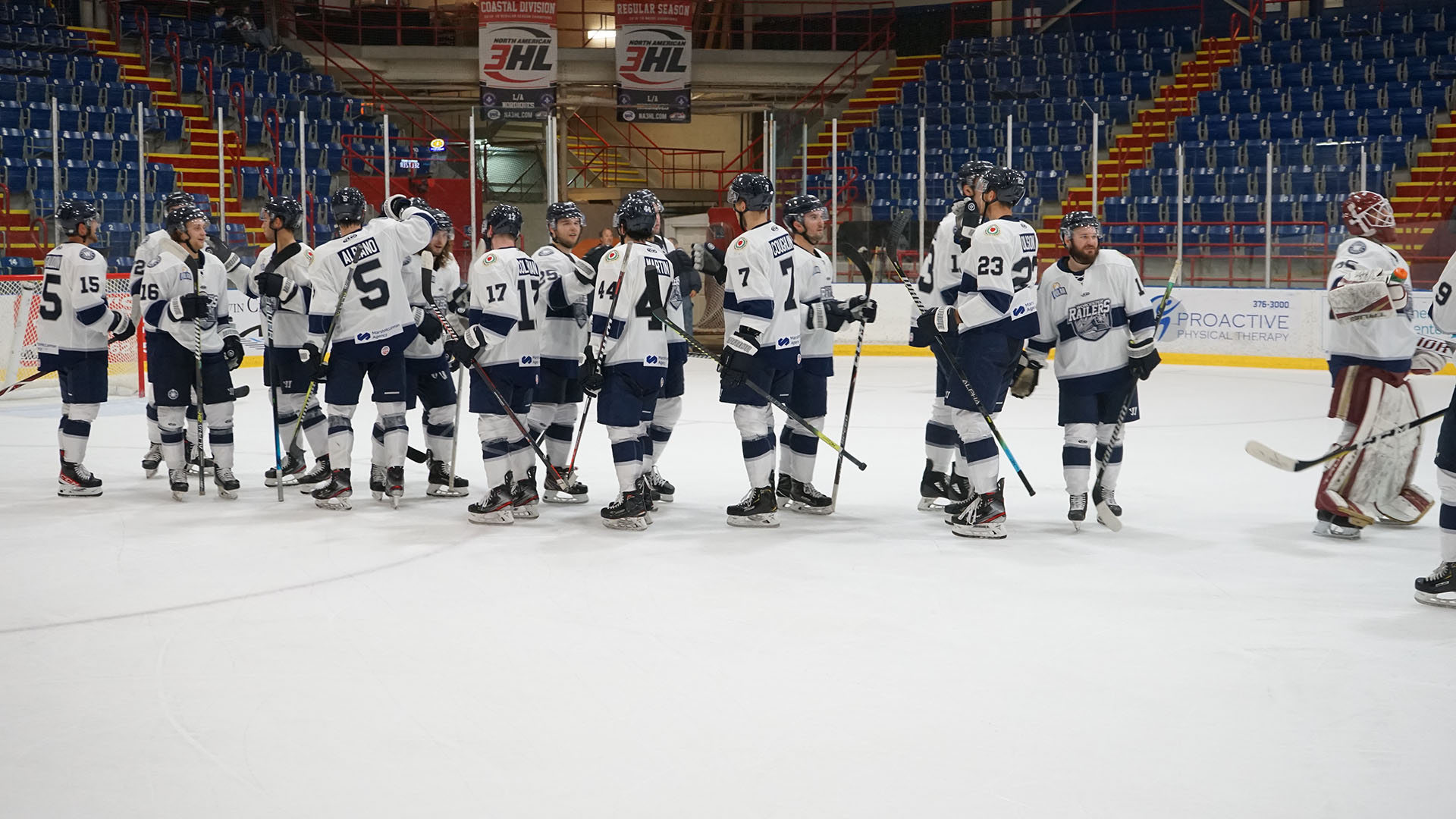 October 15, 2021
The Colisee – Lewiston, ME
Exhibition Game 1 of 2 for the Worcester Railers HC
Railers and Mariners to meet Saturday night in Worcester at Fidelity Bank Worcester Ice Center

Lewiston, ME – The Worcester Railers HC traveled to Lewiston, ME on Friday night to square off against the Maine Mariners in their first of two pre-season games this season and came away victorious 5-3. The Railers will host the Mariners tomorrow night at 6 p.m. at the Fidelity Bank Worcester Ice Center for their final pre-season game of the year.

Drew Callin (1-1-2), Ross Olsson (2-0-2), and Nolan Vesey (1-1-2) all recorded multi-point games while Justin Kapelmaster made 16 saves on 17 shots in 25:30 minutes of play for the victory. Corbin Kaczperski made 19 saves in relief for Worcester while also registering an assist.

Callin drove the puck down the right-wing wall and from below the right dot shot it off the defender’s stick in front and then the puck found its way into the back of the net to give the Railers a 1-0 lead at 9:17 of the opening period. Maine tied the game at 1-1 with just 1:53 with an obscure bounce in front of the blue paint. With just a minute left in the period forward Ross Olsson skated across the blueline and from the high slot fired a wrister and the puck dribbled its way across the goal line as Olsson’s stick proceeded to break right at the bottom of the shaft. Worcester took a 2-1 lead into the dressing room after 20 minutes of play although the Mariners held the edge in shots 12-10.

Back deep in his own zone defenseman Charlie Spetz sent a cross-ice pass up to Vesey who caught the puck just at the blue-line and at the top of the left circle he sent a wrist shot beating the goaltender Callum Booth low far side increasing the Railers lead to 3-1. Maine capitalized on a two-on-one rush to cut their deficit down to 3-2. Maine held the edge in shots 16-14 in the second period but Worcester possessed a 3-2 lead through 40 minutes of play.

Maine tied the game at 3-3 just 3:54 into the third period. Olsson (2) netted his second of the game when he received a beautiful feed from the far post and Olsson would bang it home at the top of the blue paint to hand Worcester a 4-3 lead with 9:32 left in the third period. Brent Beaudoin provided an empty-net tally with just 26 seconds left in regulation to give the Railers a 5-3 victory.

Drew Callin Scores For Second Straight Night But Railers Fall 3-1 to the Ma...
Scroll to top