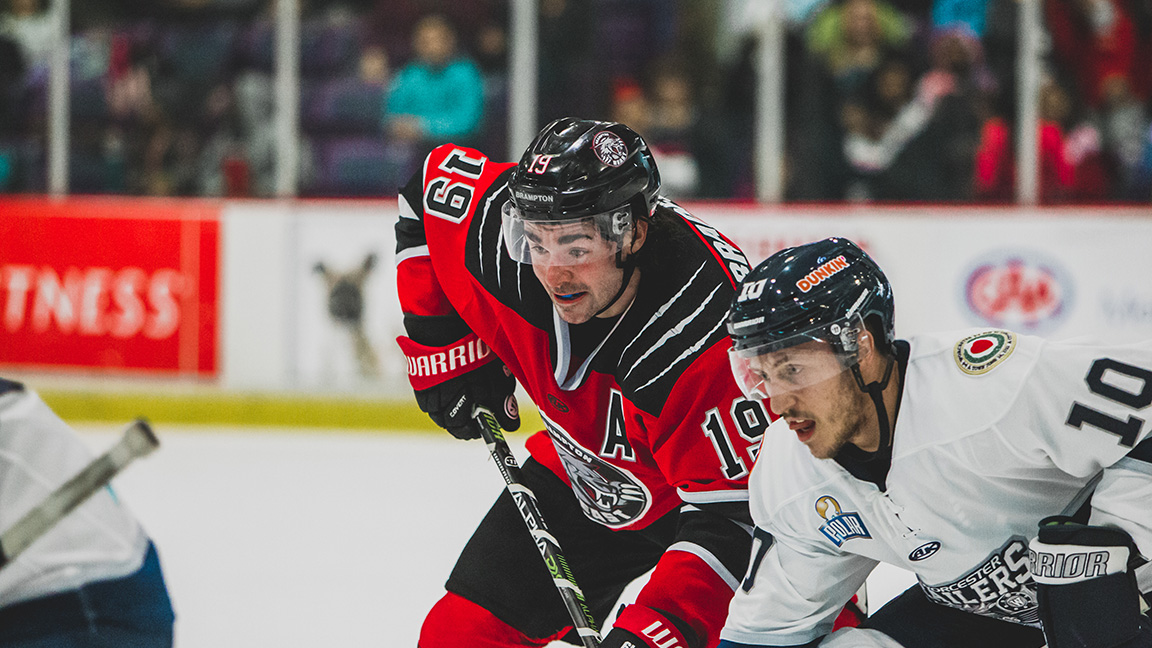 Meeting 4 of 8 vs. Brampton this season

Evan Buitenhuis made 30 saves for his second career shutout as the Railers shut down the highest scoring team in all of the ECHL. Nic Pierog (5th) scored the third short-handed goal of the season and Dante Salituro (4th) capped of the game with an empty net goal while Jordan Samuels-Thomas (0-2-2)  added two assists. Alex Dubeau made 24 saves as the Beast were shutout for the first time this season.

One penalty was called in the second period which was assessed to the Railers but, a couple shorthanded chances from Worcester and they were able to kill off the disadvantage. Neither team would find the back of the net with a scoreless hockey game through two periods. Brampton held the edge in shots 19-18 through 40 minutes as Evan Buitenhuis remained perfect making 19 saves.

After winning a defensive zone faceoff shorthanded, Nic Pierog (5th) raced through center ice and met the puck in the high slot off a feed from Jordan Samuels-Thomas and fired one by the glove of Alex Dubeau, a short-handed goal, giving the Railers a 1-0 lead 4:44 into the final frame. Dante Salituro (4th) added the insurance goal scoring on the empty net at 18:25 to cap off the 2-0 win as Evan Buitenhuis stopped all 30 shots he faced.

Notes: Three Stars: 3rd star…. Nic Pierog (1-0-1, +2) 2nd star: Alex Dubeau (23 saves, Loss)  1st star: Evan Buitenhuis (30 saves, Win) ….final shots were 30-25 for Brampton…. Alex Dubeau (7-2-0) made 23 saves on 24 shots for Brampton.… Evan Buitenhuis (3-5-0) made 30 saves on 30 shots for Worcester while Ian Milsoz served as the backup….Worcester went 0-for-5 on the power play while Brampton went 0-for-4…. Anthony Florentino (inj), Barry Almeida (inj), Tanner Pond (inj), Shane Walsh (inj), Ivan Chukarov, and Matt Schmalz did not dress for Worcester…. Barry Almeida joined Coach Cunniff behind the bench…. Evan Buitenhuis recorded his second career shutout, his first since February 16, 2019 47 saves in a 1-0 win at Tulsa….. Since David Cunniff took over as GM/HC the Railers are 17/17 on the penalty kill…. Jordan Samuels-Thomas extended his point streak to three games with an assist…. Worcester snapped the Beast six game point streak….Dante Salituro extended his point streak to two games and now has four goals in five games as a Railer…. Jakub Skarek and Linus Soderstrom are currently on recall with the Bridgeport Sound Tigers…. Worcester is now 8-9-1-2 all-time vs. the Beast and 3-5-0-2 at the CAA Centre.

What’s on tap – First Trip to Newfoundland This Season!

Worcester will battle the Growlers in Newfoundland on Friday and Saturday with 5:30pm (ET) start times. Coverage for all three games begins 30 minutes before puck drop.