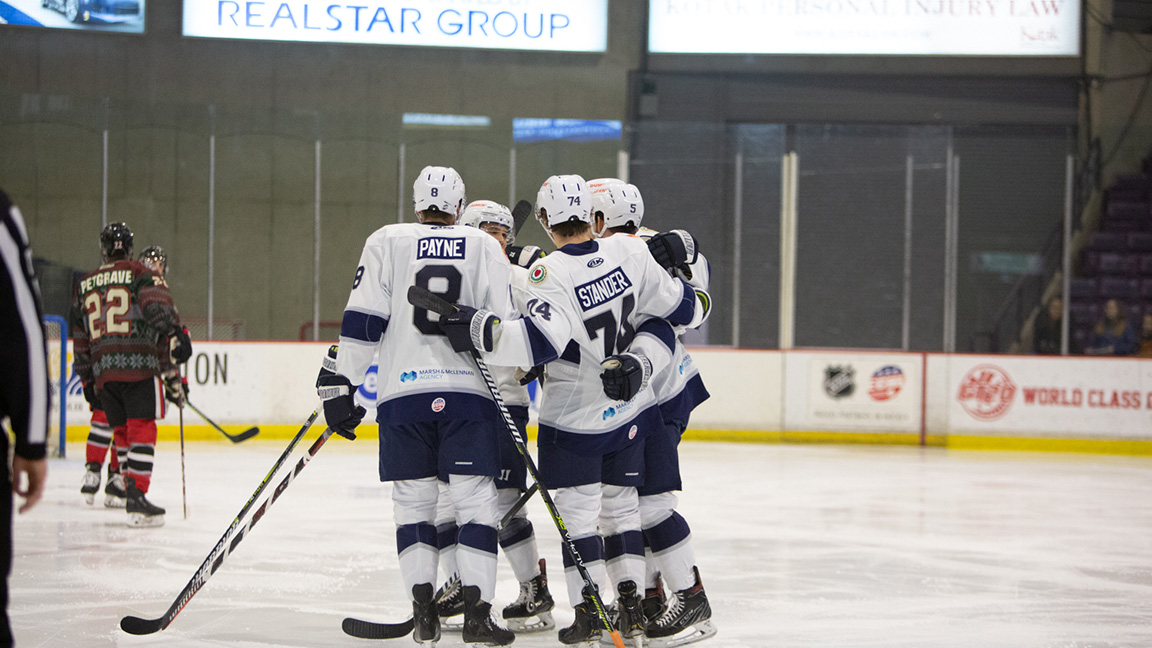 Meeting 7 of 8 vs. Brampton this season

Brampton, Ontario – The Worcester Railers HC (9-17-1-0, 19pts) set a season high with seven goals in a triumphant 7-3 victory over the Brampton Beast (17-11-1-0, 35pts) on Saturday evening in front of 2,246 fans at the CAA Centre. The Railers head on a four-day holiday break and will be back in action Friday Dec. 27thin Glens Fall vs. the Adirondack Thunder at 7pm.

Shane Walsh (3-0-3) recorded the Railers second hat trick of the season while Evan Buitenhuis made 33 saves in net for his fifth win of the year. Yanick Turcotte scored his first goal of the season while Nic Pierog, Drew Callin, and Barry Almeida added the other tallies. Brampton received goals from David Pacan, Cameron Bakker, and Erik Bradford while Evan Fitzpatrick made 28 saves in net.

The Railers scored three unanswered goals in the first period started by Yanick Turcotte (1st) just 41 seconds into the first period as he redirected a shot from the point courtesy of Jack Stander to give Worcetsr a 1-0 lead. At 6:54 Nic Pierog (9th) tipped a rebound past the glove of Evan Fitzpatrick to increase the Railers lead to 2-0. After following up his initial shot Shane Walsh (5th) was able to beat out the defenseman to the puck and from the inner right circle snapped one past the glove of Fitzpatrick just 38 seconds after the Pierog strike to give Worcester a 3-0 lead. Brampton grabbed two goals of their own in the first period, one on the power-play at 9:09 and then an even strength tally at 11:42 to cut the deficit to one. The Railers took a 3-2 lead into the dressing room after 20 minutes of play and outshot the Beast 17-12.

The only goal of the second period was the second of the game from Shane Walsh (6th) who drove down the left-wing side and zipped one by the glove of Evan Fitzpatrick at 12:28 to give the Railers a 4-2 lead. The Railers were outshot in the stanza 18-7 but took a 4-2 lead into the locker room through 40 minutes of play.

After a great individual effort from Dante Salituro splitting the two defenders leading the rush Shane Walsh (7th) would cap off a hat trick smacking one home just a minute into the third period to give Worcester a 5-2 lead. At 4:15 of the period Yanick Turcotte received a 10-minute misconduct, two minutes for roughing, and two minutes for an instigator as goaltender Evan Fitzpatrick received just two minutes for roughing. On the five-minute power-play the Beast scored just one goal coming from Erik Bradford (8th) at 7:59. Late in the stanza Worcester added goals from Drew Callin at 15:54 and Barry Almeida at 18:13 to capture a big 7-3 win heading into the holiday break.

Notes: Three Stars: 3rd star…. David Pacan (1-1-2) 2nd star: Evan Buitenhuis  (33 saves, Win) 1st star: Shane Walsh (3-0-3, +3, 6 shots) ….final shots were 36-35 Brampton …. Evan Fitzpatrick (2-4-2) made 28 saves on 35 shots in net for Brampton.… Evan Buitenhuis (5-9-0) made 33 saves on 36 shots for Worcester while Ian Milosz served as the backup…. Worcester went 1-for-3 on the power play while Brampton went 2-for-4…. Bo Brauer, , Anthony Florentino, Jordan Samuels-Thomas (inj) and Tanner Pond (inj) did not dress for Worcester…. Mike Cornell, David Quenneville, Jakub Skarek, and Linus Soderstrom are currently on recall with the Bridgeport Sound Tigers…. Jordan Samuels-Thomas joined David Cunniff behind the bench…. Shane Walsh registered his 100thECHL point with his second goal of the game and since missing eight games with an injury he has six goals and one assist in six games…. Shane Walsh’s hat trick was just the second Railers hat trick in regulation and the first on the road…. Dante Salituro (0-3-3) added three assists for his second multi-point game of the season…. Barry Almeida (1-2-3) recorded his sixth multi-point game of the season…. Yanick Turcotte had a game high 19 penalty minutes and is now third in the league with 88 penalty minutes…. The Railers had 10 players with a plus rating…. 10 assists in the game was a season high…. 17 shots in the first period from Worcester was the most in the first frame this season…. The three goal first period tied a first period high dating back to October 12th…. Worcester is now 9-10-1-2 all-time vs. the Beast and 4-6-0-2 at the CAA Centre.

After a four-day holiday break, the Railers head to Adirondack on Dec 27 for a 7pm start time vs. the Thunder.