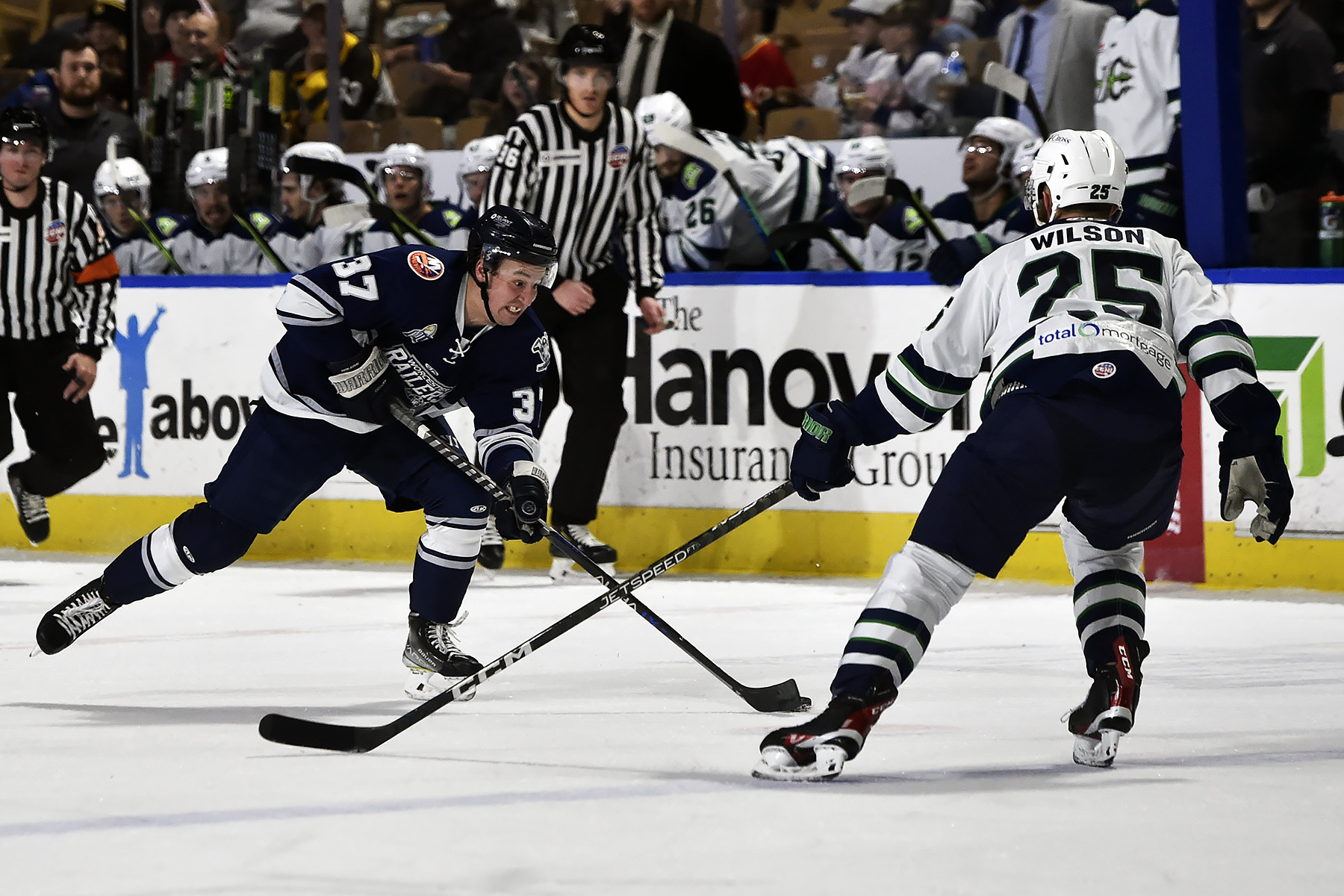 By Bill Ballou
WORCESTER – It seems as though every Railers game this season has involved the hottest team in the ECHL.
In the glorious early days of the year, Worcester was that team. Since then things have gone in the other direction. The Railers ran into Idaho from the west, then played Reading when the Royals were hot, Newfoundland which is always hot, and now the Maine Mariners who are as close to invincible as it gets in this league.
They beat the Railers, 3-1, Saturday night before a big crowd of 6,045 on Bobby Butler Bobblehead Night. Maine has earned 21 points of a possible 22 in its last 11 games, the one defect being a shootout loss to Worcester in Portland.
The Mariners are a remarkable 15-3-1 on the road this season.
Worcester and Maine almost always play interesting games and this was no exception. It was a great goaltending duel between two goalies with NHL experience, the Railers’ Ken Appleby and Michael DiPietro of the Mariners.
Between them, the two men combined to stop 77 of the 81 shots on goal. Appleby had 42 saves, DiPietro 35. Appleby kept his team in the game in the first 40 minutes when the Railers were outshot by 38-13. DiPietro was sensational in the third period when Worcester had a 23-7 advantage in shots.
The Railers had to play from behind for most of the night. Alex Kile put Maine ahead at 15:54 of the first period, Nate Kallen made it 2-0 at 3:34 of the second and Grant Gabriele gave the Mariners a 3-0 lead at 3:20 of the third.
Reece Newkirk scored the Worcester goal at 10:06 of the third, an event that commenced an eventful closing section of the game. Newkirk went directly to the penalty box after the goal, having engaged in some roughing with Tyler Hinam.
As the clock wound down, Newkirk and former Railer Connor Doherty began sparring and that eventually erupted into something more serious at the final buzzer. Both wound up with double minors for roughing.
For many of the games during their current skid, it has been more the “when” of the goals allowed than the raw numbers for Worcester. Such was the case Saturday night.
The Railers put together a dominant power play at 13:24 of the first period when Maine’s Gabriel Chicoine was called for a high stick. Worcester had several great chances, the best right near the end when Collin Adams could not hit a mostly vacant net from the bottom of the right circle.
That momentum dissolved almost immediately when Kile popped a short one home just 30 seconds after the Mariners regained full strength.
It was 1-0 after 20 minutes but Railers defenseman Christian Evers was in the box when the second period opened. Worcester wound up having to kill a triple penalty as Zack Bross was exiled at 0:49, then Myles McGurty at 1:20.
The Railers killed those penalties remarkably well, but Kallen sucked the life out of that achievement by connecting on a rebound just five seconds after McGurty’s penalty expired.
Worcester, in fourth place, finishes this three-in-three weekend Sunday afternoon with a game against Trois-Rivieres which is in fifth place. It will be just the fourth time in 19 games the Railers played a team that wasn’t in first or second place.
MAKING TRACKS – The crowd was the third-largest of the season. The Railers are 8-3-1 all-time before home crowds bigger than 7,000 but just 3-6-0 when attendance is between 6,000 and 7,000. … Jordan Kaplan, who was on his fourth ECHL team this season when he joined the Railers, has gone to Europe so was suspended by the team. That is standard procedure in such cases. … The Railers and Mariners do not play again until March 5, then play six games in a span of 30 days. … Butler did not score but had an assist on his night. He and Doherty had an all-Central Mass. ceremonial puck drop. Butler is from Marlboro, Doherty from Holden.
https://railershc.com/wp-content/uploads/2023/01/2EDIT_RL48942-RICH-LEBLANC-1.jpg 1200 1800 admin /_media/2021-22/logo.png admin2023-01-22 07:39:132023-01-22 22:19:05Comeback Effort Against Maine Falls Short, Railers Lose 3-1