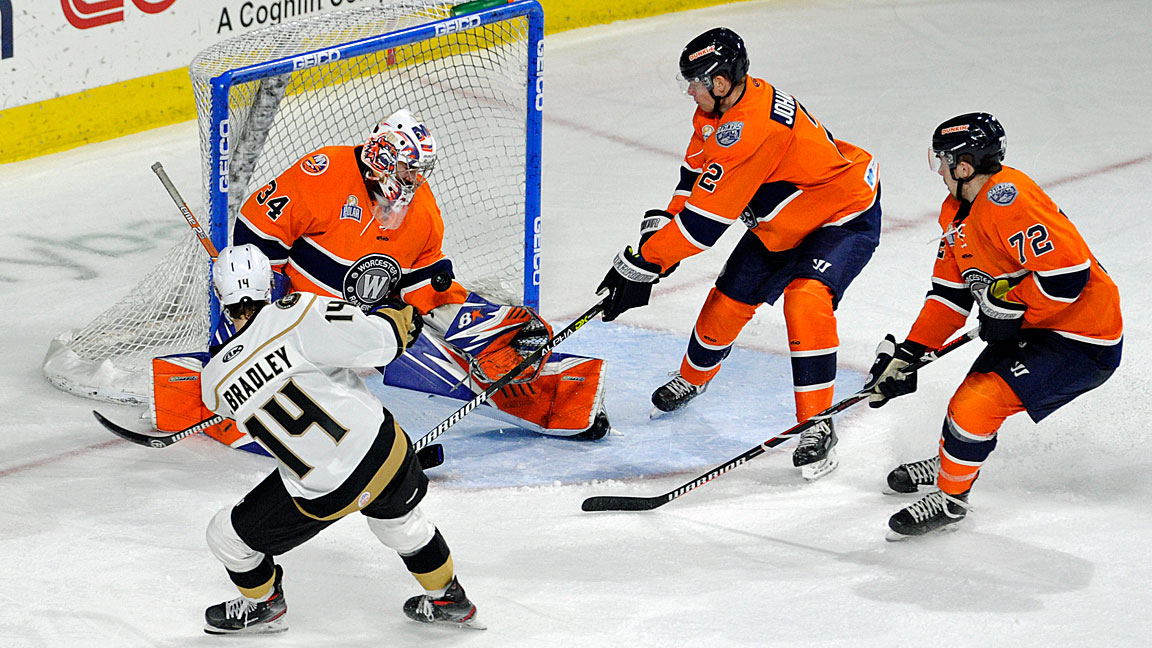 Storm Toopers Power Past the Railers 5-3

Nic Pierog extended his point streak to five games with a power-play goal while Barry Almeida scored on the power-play as well and Arnaud Durandeau scored his first ECHL goal. Ian Milosz came in relief for Eavan Buitenhuis with 8:13 left in the third period with Buitenhuis finishing the night making 30 saves in the loss. Trey Bradley (2-0-2) scored two goals for the Growlers who went off to a 5-0 lead and Angus Redmond made 21 saves in net to stay a perfect 8-0 this season.

Trey Bradley (7th) notched the only goal of the first period after James Melindy sent a shot off the end wall from the point then Bradley slammed home a rebound on top of the crease at 11:04 to give the Growlers a 1-0 lead. Newfoundland outshot Worcester 12-8 and led 1-0 through 20 minutes of play.

The Railers surrendered three goals in the second period started off by a penalty shot score from Aaron Luchuck (13th) just 25 seconds in giving Newfoundland a 2-0 advantage. Trey Bradley (8th) notched his (8th) second goal of the night coming at 8:12 and then just 3:59 later Giorgio Estephan (15th) finished off a pretty passing play on a two on one making it a 4-0 Growlers lead. Newfoundland led 4-0 through 40 minutes of play and outshot Worcester 14-10 in the middle stanza.

Zach O’Brien (11th) started the scoring the in final frame receiving a shot pass on the top of the crease sending it home to give the Growlers a 5-0 advantage. After a double minor for high sticking against Newfoundland at 14:28 the Railers answered twice on the power-play. Arnaud Durandeau set up the first goal finindin Nic Pierog on the far side post at 15:34 then just 1:23 later Barry Almeida (10th) fired one past the right shoulder of Angus Redmond off a feed from Ryan MacKinnon and Newfoundland now just led 5-2 with 2:03 to go in the third period. Aranuad Durandeau (1st) went in all alone on a breakaway after a rainbow pass from Ben Thomson out of the Railers end and Durandeau went backhand forehand to beat Redmond with just 58 seconds left in the third stanza cutting the deficit down to 5-3. Newfoundland was able to hang on for the 5-3 win and their eighth straight victory.

Notes: Three Stars: 3rd star: Nic Pierog (1-0-1, 5 shots) 2nd star: Michael Kapla (0-2-2, +1, 4 shots) 1st star: Trey Bradley (2-0-2, +2, 6 shots) …. final shots were 36-24 in favor of Worcester…Angus Redmond (8-0-0) made 21 saves on 24 shots Newfoundland… Evan Buitenhuis (9-11-1) made 30 saves on 35 shots for Worcester while Ian Milosz served as the backup…. Worcester went 2-for-3 on the power play while Newfoundland went 0-for-4…. Kyle McKenzie (inj,), Jordan Samuels-Thomas (inj), JD Dudek (IR), Tanner Pond (IR), Dante Salituro, and Cody Payne did not dress for Worcester…. Mike Cornell, David Quenneville, Linus Soderstrom, Jakub Skarek are all currently on recall with the Bridgeport Sound Tigers…. Nic Pierog extended his point streak to five games with his team leading 15thgoal…. Barry Almeida and Nic Pierog are now tied for the team lead with five power-play goals…. Yanick Turcotte received a game high 14 penalty minutes and now has 119 on the season to lead the ECHL…. Ian Milosz made one save on one shot in relief for Evan Butienhuis playing 6:29…. Connor Doherty is the only Railers player to play in the first 36 games this season…..  the Railers are now 10-10-1 under Coach Cunniff…. Worcester scored three goals in a 3:28 span in the third period…. Worcester Leicester High and Grafton/Blackstone Valley Tech played before the Railers game and skated to a 1-1 tie…. Worcester is now 4-11-1-0 vs. the Growlers all time and 3-5-0-0 at the DCU Center.

Still and Stir located behind the DCU Center provides hockey fans with a great pregame and postgame atmosphere all season long. Watch all road games broadcast live on ECHLTV.com for a small fee. Listen to all Railers games live on 98.9 Nash ICON with coverage beginning 30 minutes before puck drop with Eric Lindquist and Cam McGuire. Full season memberships, mini plans, and group tickets are on sale now by calling the Railers front office at 508-365-1750 or by visitingwww.RailersHC.com.

The Worcester Railers host a promotion-packed weekend at the DCU Center!
Scroll to top