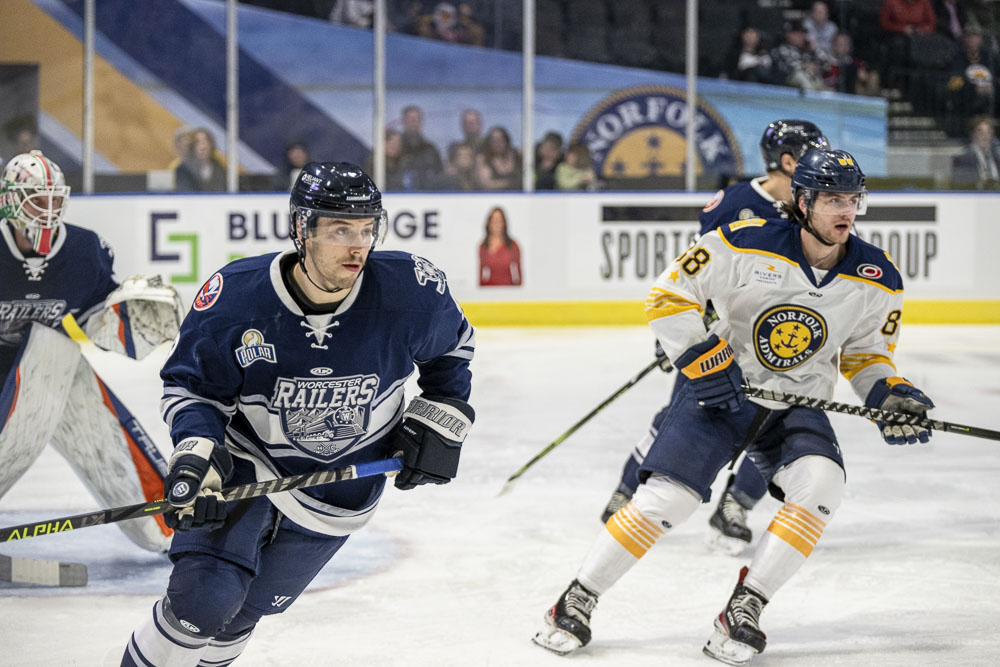 Meeting 4 of 8 vs. Norfolk this season

Blake Christensen (1-2-3) scored on a tap pass in the first to put Worcester up late in the first, 1-0. Collin Adams (1-1-2) then cleaned up a rebound out in front early in the second to make it 2-0 Worcester. Jack Quinlivan (1-0-1) then scored his first professional goal midway through the second and pushed the Railers out to a 3-0 lead. Alex Pommerville (1-0-1) got Norfolk back to within one, before Blade Jenkins (1-2-3) wristed one top shelf late in the third to wrap up the scoring at 4-1 Worcester.

The Railers have scored the game’s first goal in eleven out of their 15 games played. Blake Christensen (2nd) would be the one to strike first on Wednesday for Worcester. While in the slot, Christensen deflected a pass from Collin Adams towards the net and past Vomacka to open the game at 1-0 Worcester. Shots in the first favored Norfolk 10-7.

Collin Adams (8th) scored the eventual game-winner with his team-leading eighth goal of the season. There was a scrum in front of the net that popped back onto the stick of Adams who first shot it into traffic, then grabbed his own rebound and launched it back on net to make it 2-0 Worcester. Jack Quinlivan (1st) followed it up with his first professional tally off a side feed from Blade Jenkins and made it 3-0 Worcester. Shots in the second favored Worcester 17-11, and now favored Worcester on the game 27-18.

Norfolk would get one back midway through the period as Alex Pommerville (1st) hammered a slapshot from atop the left circle past Henrik Tikkanen to make it 3-1 Railers. Worcester had maintained a shutout streak of 119 minutes, with the last goal allowed coming late in Friday’s overtime victory over Greenville. Blade Jenkins (7th) capped off a big night with his seventh of the season, this time scoring on the powerplay to make it 4-1 Worcester. The Admirals outshot the Railers 8-7, while Worcester led in shooting 31-29 on the game.