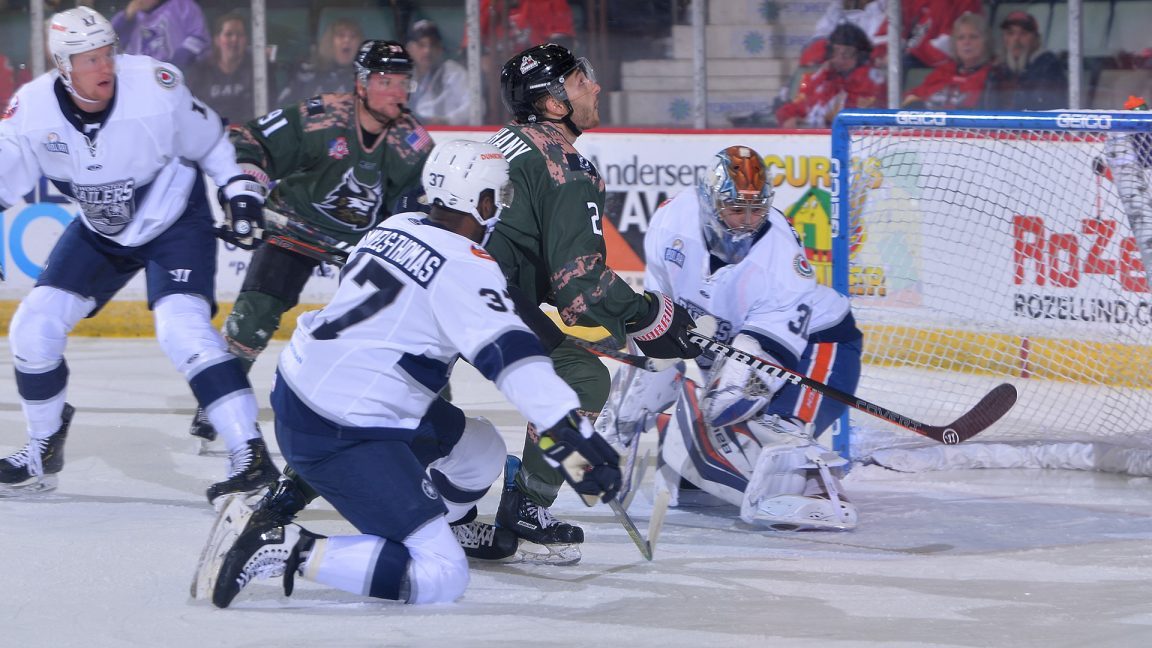 Meeting 3 of 14 vs. Adirondack this season

Nic Pierog scores his first goal as a Railer

Glens Falls, NY– The Worcester Railers HC (3-1-0-0, 6pts) kicked off their three in three weekend with a 4-1 win over the host the Adirondack Thunder (3-2-0-1, 7pts )on Friday evening in front of 4,326 fans at the Cool Insuring Arena. The Railers are back in action on Saturday, October 26 with a 7pm battle back at CAA Centre in Brampton, ON vs. the Brampton Beast.

Kyle Thomas, Matt Schmalz, and Nic Pierog (2) all scored goals for Worcester while Linus Soderstrom made 25 saves in his North American pro debut as the two teams combined for 66 PIMS in a feisty affair. Charlie Curti scored for Adirondack while Eamon McAdam made 26 saves in net for the loss for the Thunder. Tanner Pond extended his point streak to four games and picked up a fighting major while Ryan Hitchcock picked up two assists in Worcester’s first road victory of the season.

It did not take long for the Railers to get on the board as Kyle Thomas (3rd) buried home a loose rebound past Thunder netminder Eamon McAdam just 20 seconds into the first period giving Worcester a 1-0 lead. After Kyle Thomas was hit from behind in the offensive zone, Tanner Pond (1stFM) stepped up for his teammate and squared off against Michael Sdao (1stFM) as both would serve five minutes for fighting at 7:59. On the ensuing faceoff chaos broke with a line brawl at 8:16 in which Kyle Thomas was ejected while Connor Doherty, Ross Olsson, and Mike Cornell all dropped the mitts for Worcester. Matt Schmalz (1st) made it a 2-0 game on the power play at 17:09 deflecting a JD Dudek blast from the point past McAdam with Barry Almeida picking up the secondary assist. Linus Soderstrom stopped all nine shots he faced in the first period as the Railers outshot the Thunder 16-9 through 20 minutes of play. The Railers had eight infractions for 38 PIMS while the Thunder had six infractions for 18 PIMS in a fight filled first period.

In the second period the Thunder would decrease the deficit to 2-1 as Charlie Curti (3rd) was able to sneak one past Soderstrom at 4:45 as he finished off a two on one break. The Railers had multiple chances on the power play in the middle frame and Nic Pierog (1st) would score his first goal as a Railer on the five on three at 7:33 giving Worcester the 3-1 lead. Linus Soderstrom stopped 10 of 11 shots he faced and the Railers outshot the Thunder 24-20 through 40 minutes of play as the Railers lead 3-1.

Nic Pierog had a chance to put the Railers ahead with a penalty shot opportunity but Eamon McAdam made a big save at 7:14 of the third period. Worcester would score the only goal of the period thanks to an empty net tally from Nic Pierog (2nd) with just three seconds left in the game. Soderstrom stopped all six shots he faced in the final frame while the Railers were able to kill off two penalties.

Notes: Three Stars: 3rd star: Charlie Curti (1-0-1) 2nd star: Barry Almeida (0-1-1) 1st star: Linus Soderstrom (25 Saves, Win) …. final shots were 30-26 in favor of Worcester…Eamon McAdam (2-1-1) made 26 saves on 29 shots … Linus Soderstrom (1-0-0) made 25 saves on 26 shots for Worcester while Evan Buitenhuis served as the backup…. Worcester went 2-for-5 on the power play while Adirondack went 0-for-4…. The Railers remain perfect on the penalty kill killing of all 17 chances…. Tanner Pond (2-2-4) extended his point streak to four games with an assist…. Cody Payne (2-1-3) extended his point streak to three games with an assist…. Nic Pierog scored his first goal as a Railer and finished with two goals and a team high seven shots…. Ryan Hitchcock picked up two assists….., Henrik Samuelsson (inj), Bo Brauer (inj), Chris Rygus, Justin Murray and Drew Callin did not dress for Worcester….. Anthony Florentino made his debut for Worcester and finished with two shots…. Kyle Thomas picked up a game high 20 penalty minutes…. Worcester is now 17-7-2-0 all-time vs. the Thunder and 10-4-1-0 at the Cool Insuring Arena.

What’s on tap – Crossing the Border!

The Railers travel to Canada for the first time this season and will take on the Brampton Beast Saturday, October 26 with a 7pm faceoff. Coverage begins at 6:30pm on 98.9 Nash Icon. The Railers return home on Nov 1 on HOCKEY FIGHTS CANCER NIGHT followed by a W6 TRIBUTE NIGHT with a GUNS N HOSES DOUBLEHEADER featuring RAY BOURQUE presented by Berkshire Bank on Nov 2.