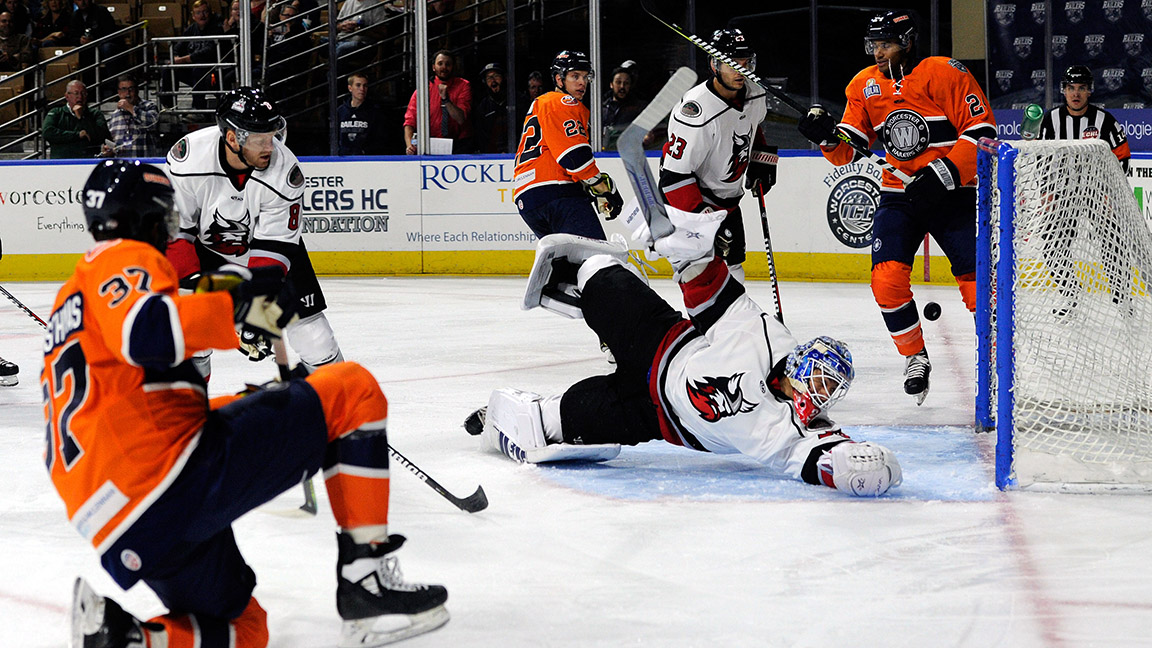 The Railers earned their first road win of the season this past Friday with a 4-1 victory over the Adirondack Thunder. Veteran forward Kyle Thomas (3rd) gave the Railers a 1-0 lead just 20 seconds into the game. There were a total of 66 PIMS dished out in the contest, of which 42 were assessed to Worcester (the fourth most by a team this season in a single game). 40 of those PIMS came at 8:16 of the first period in which a line brawl occurred. Connor Doherty and Tanner Pond both picked up their first fighting majors of the season. Matt Schmalz’s (1st) first goal of the season came on the power play, and Nic Pierog (1st/2nd) scored his first goal as a Railer which also came on the power play in the second frame and then the Halton, ON native scored an empty netter. Linus Soderstrom made his North American debut in net and made 25 saves on 26, shots picking up the win as well as the first star of the contest.

In their first trip across the border to Canada, Worcester fell 5-2 to the Brampton Beast on Saturday night where both of the Railers goals came on the power play thanks to Cody Payne (2nd) and JordanSamuels-Thomas (2nd).Rookie defenseman Justin Murray recorded his first professional fight in the second period. Although Worcester surrendered their first goal shorthanded goal and finished the night 3-for-5 on the penalty kill, it was the second game in a row that the Railers finished the game 2-for-5 on the power play.

Things did not go the Railers way as they closed out the three in three weekend with a 6-0 loss to the Brampton Beast. For the second time in three games, there were a total of 66 PIMS, 36 of which were credited to the Railers. Barry Almeida and Nic Pierog led Worcester with four shots a piece while Justin Murray led the club with 10 PIMS.

Goaltender Jakub Skarek was recalled by the Bridgeport Sound Tigers this past Thursday and made his AHL debut on Saturday in a 4-1 loss to the Hartford Wolf Pack where he made 30 saves on 34 shots.

Back Home For an Action Packed Weekend

On Friday, November 1 at 7pm vs. the defending Kelly Cup Champions the Newfoundland Growlers it will be a 2-3-4 weekday. Enjoy $2 popcorn, $3 sodas, and $4 Bud Lights in the Bud Light Lounge on Hockey Fights Cancer Night presented by 100FM The Pike with a Moustache Giveaway. It is and INSTAGRAM FRIDAY presented by the EDGE at Union Station – snap a photo and win prizes in the IG Zone!

On Saturday, November 2 at 7pm vs. the Adirondack Thunder it is W6 Night with a specialty jersey and a Guns N Hoses Doubleheader highlighted by an appearance from Berkshire Bank Spokesperson Ray Bourque with doors opening at 4pm.

Tickets start at just $15! Click HERE to get your tickets today.

Worcester Railers stumble 6-0 in Brampton to the Beast

Earned Never Given
Scroll to top