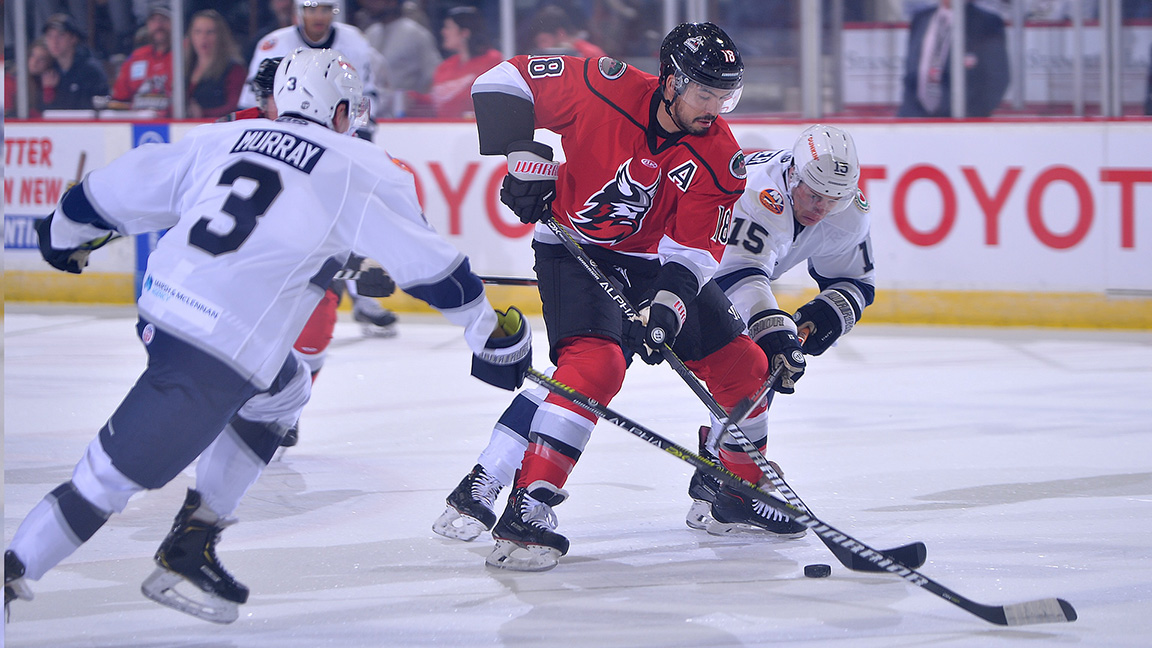 Meeting 2 of 14 vs. Adirondack this season

Glens Falls, NY– The Worcester Railers HC (2-1-0-0, 4pts) lost for the first time this season in their first road game in a 3-2 loss to the host the Adirondack Thunder (2-1-0-1, 4pts) on Saturday evening in front of 4,283 fans at the Cool Insuring Arena. The Railers are back in action on Friday, October 25 with a 7pm battle back at the Cool Insuring Arena in Glens Falls, NY vs. the Adirondack Thunder.

Tanner Pond scored in his second straight game while Cody Payne scored his first professional goal to give Worcester a 2-0 lead. However, Charlie Curti scored his first two professional goals as the Thunder would go on to score three unanswered goals to prevail 3-2 on their opening night. Former Railer Eamon Mcadam made 33 saves on 35 shots while Evan Buitenhuis made 19 saves on 22 shots in his first start of the season.

There was no score two show for after the first period as Evan Buitenhuis stopped all 16 shots he faced. Cody Payne and Michael Sdao would get into a skirmish but would only be assessed double minors for roughing at 8:51. Worcester outshot Adirondack 16-8 through the first 20 minutes of play.

The second period was action packed with the Railers getting on the board at 5:45 on the power play thanks to a laser from Tanner Pond (2nd) with the assist going to Mike Cornell and Ivan Chukarov. Worcester would increase their lead to 2-0 with Cody Payne (1st) scoring beating Eamon McAdam low blocker at 11:03. In the final minutes of the middle frame Charlie Curti (1st) would find the back of the net with a wrister from the top of the right circle past the glove side of Evan Buitenhuis at 17:34. The Railers would take a 2-1 lead into the dressing room after 40 minutes of play as Buitenhuis stopped eight of nine shots he faced. Worcester led in shots 32-17 after the second period.

Adirondack would tie the game at 2-2 at 8:41 of the third period thanks to Charlie Curti (2nd) who fired one past Buitenhuis in the high slot. The Thunder would take their first lead of the game when Kelly Summers (1st) was able to sneak one past Buitenhuis at 16:15 giving the home team a 3-2 lead. The Railers pulled Buitenhuis in the final two minutes of the period and had several good chances but McAdam came up multiple big saves as the Thunder won 3-2.

What’s on tap – Back in Adirondack!

The Railers will be back in Glens Falls, NY next Friday, October 25 with a 7pm faceoff vs. the Adirondack Thunder. Coverage begins at 6:30pm on 98.9 Nash Icon. The Railers return home on Nov 1 on HOCKEY FIGHTS CANCER NIGHT followed by a W6 TRIBUTE NIGHT with a GUNS N HOSES DOUBLEHEADER featuring RAY BOURQUE presented by Berkshire Bank on Nov 2.