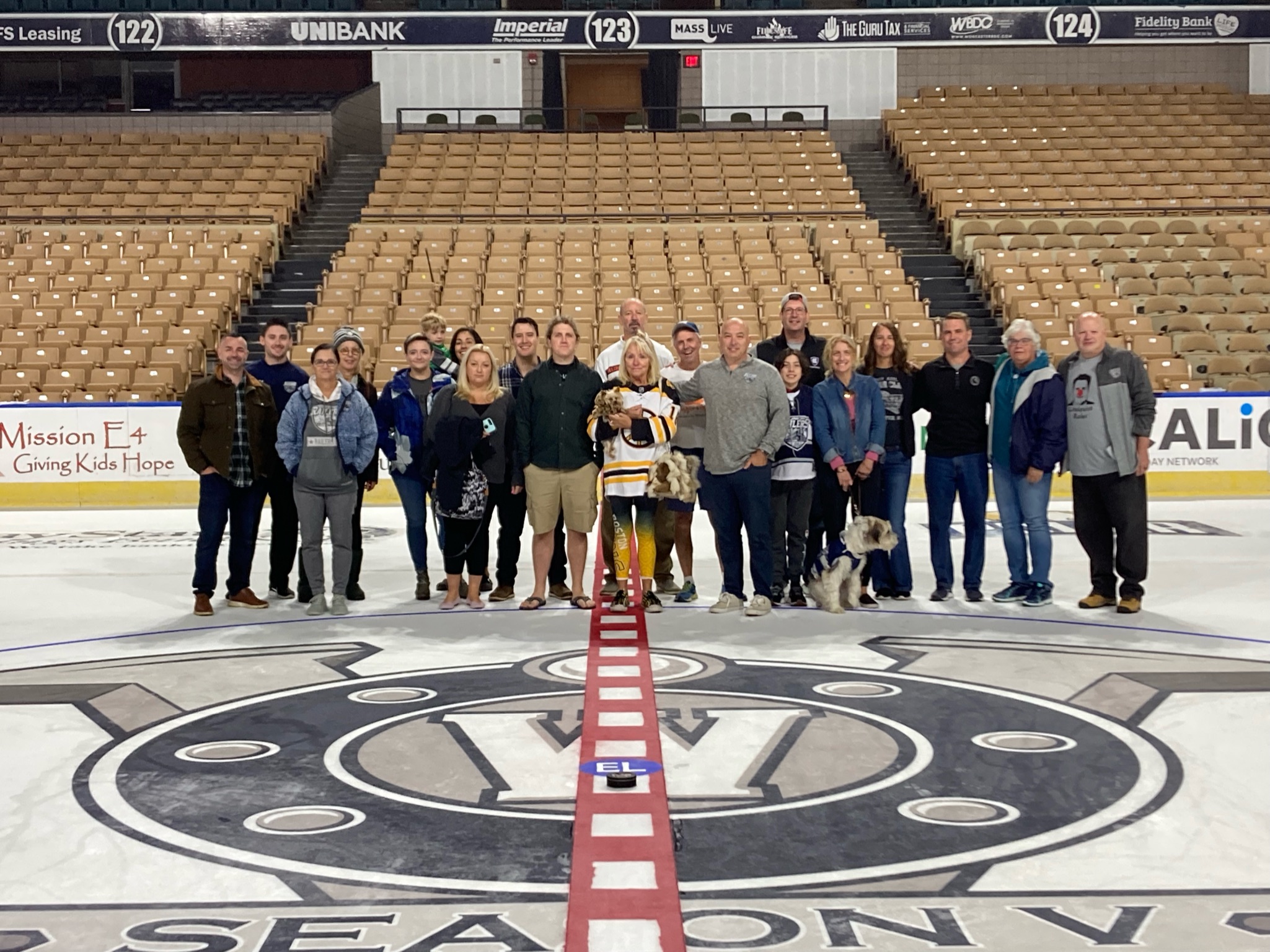 Professional hockey has been part of the Worcester scene for 24 seasons, and Eric Lindquist was the voice of the game, and one of the most recognizable faces of the game, for 12 of those seasons, first with the Sharks, then with the Railers.

Lindquist died unexpectedly in May at 43 having been part of pro hockey here for half of its existence. He will remain part of the game for the foreseeable future. The Railers are making sure of that.

Last week, with ice being put down at the DCU Center in preparation for the team’s fifth playing season in the ECHL, a group of Lindquist’s friends and relatives joined together in the building to celebrate his life and help spread some of his ashes on the ice as it was being built up.

As part of that celebration, something that can be seen and recognized by players and fans, the Railers stenciled his initials — EL — at center ice where the puck will drop to open each period.

The team is planning on making it an annual event, but only to some extent. The Railers will mix Lindquist’s ashes with the DCU Center ice until the team wins the Kelly Cup.

“Would we like to win it this season? Absolutely,” said Railers COO Mike Myers, who was struck by the idea at an earlier get-together — a much larger event — in the days after Lindquist’s death.

“I talked to his mom,” Myers said, “and she told me they were doing a cremation. So I asked about getting some of his ashes to do something here in Worcester. Plant a tree, put up a bench, something like that, but then putting some in the ice was a no-brainer.”

Myers figured the DCU Center ceremony would be a local item. He discovered, though, that it had a much broader reach.

“A lot of people reacted to it,” he said. “I didn’t realize it was all that unique, but we got so many responses to how unique it actually was. I don’t know how many other teams have done something like that.”

The whole unique thing was a perfect way to remember Lindquist, who was one of the most unique people to ever be part of the Worcester hockey landscape.

Beyond the DCU Center ceremony the Railers plan to honor Lindquist’s memory financially.

“We’re establishing the Eric Lindquist scholarship,” Myers said. “It is basically for an aspiring broadcaster to do an internship and it provides a stipend. The position will be a mentoring opportunity with Tim Foley (the Railers Broadcasting and Media Relations head) to do some color commentary, work on the hockey operations side and put sort of a tool belt together for career opportunities.

“It is not a fulltime job, but it will be more than just broadcasting.”

The Railers are still accepting applicants and are using the Teamworkonline site as part of the process. They hope to have the position filled by opening night later this month.

“We want who we hire to be able to hit the ground running,” Myers said. “You post a broadcast job and 100 resumes come out of everywhere. It is a very competitive market, and this will give that candidate a chance to gain some skills.”

And it will done in memory of one of Worcester hockey’s most unforgettable personalities.