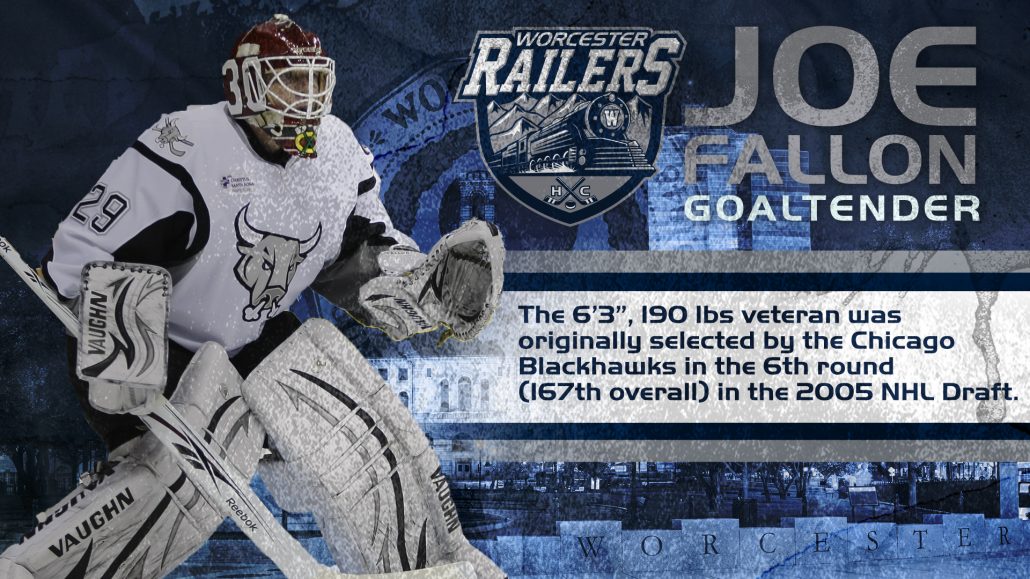 The six-foot-three, 190-pound veteran goaltender was originally selected by the Chicago Blackhawks in the sixth round (167th overall) in the 2005 NHL Draft. Fallon served as the backup goaltender for the Blackhawks on February 3, 2010.

“Joe is a big mobile goaltender that has a proven track record in the ECHL and the AHL,” said Russell. “Fallon will bring experience between the pipes and will certainly help us win hockey games in Worcester right out of the gate.”

Entering his 10th professional season, Fallon has played in the ECHL for Fresno, Gwinnett, and Las Vegas. Joe led the Las Vegas Wranglers to the Kelly Cup Final after posting a 30-win season in 2011-12, and was a ECHL Second Team All-Star that season. He has also suited up in the AHL with Rockford, Peoria, San Antonio, Bridgeport, and Houston, which included a 15-win season with the Rockford Ice Hogs in 2009-10.

The 32-year-old native of Bemidji, MN went 20-24-6 with a 3.37 goals against average and an .896 save percentage in 51 games with the Dundee Stars of the Elite Ice Hockey League (EIHL) last season.

Prior to turning pro in 2008, Fallon spent four years with University of Vermont (2004-2008) where he recorded 63 wins through four seasons.

The Railers are expected to announce more player signings upon approval from the ECHL.

The Worcester Railers Hockey Club, a proud member of the ECHL, will play their inaugural game at the DCU Center on Oct. 14, 2017 vs. the Manchester Monarchs. Full season memberships start at just $432 for 36 regular season games at the DCU Center and can be purchased by calling the Railers front office at 508-365-1750 or by visiting www.RailersHC.com.