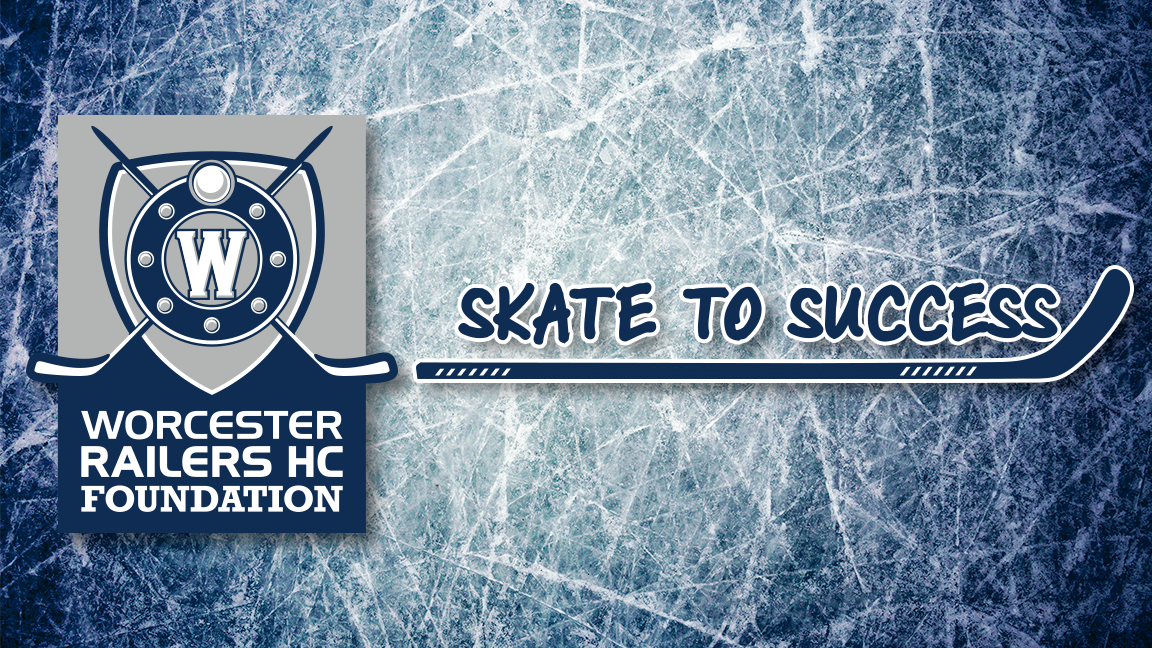 Skate to Success is the Worcester Railers HC flagship community initiative aimed to introduce ice skating and hockey to Worcester Public School students at no cost.

Phase two of Skate to Success provides 50 scholarships to fifth grade students each season to participate in a more extensive Learn to Skate program at the Fidelity Bank Worcester Ice Center. The scholarships will cover tuition and equipment rentals. Any fifth grader from the Worcester Public School system is eligible to apply for the scholarship. For more information about the Railers Learn to Skate program click HERE.

Phase One of Skate to Success was launched last season and introduces ice skating to fourth grade students from the Worcester Public School System every Tuesday from September through late March. Each student gets suited up with skates and a helmet before receiving instruction from Railers players, coaches and staff along with Boston Bruins alumni on the two ice sheets of ice. After each skate, all students are fed a lunch from Nonna’s Pizza and Pasta and receive a Skate to Success Railers welcome packet which includes a Railers school folder, pencils, and a long sleeve jersey shirt.  Phase One of the program is expecting another 2,200 fourth graders this season.

The Skate to Successprogram is at no cost to the students or the City of Worcester thanks to the Worcester Railers HC Foundation and the following sponsors:

“The Railers are excited to launch phase two this upcoming season,” said Railers HC president Mike Myers. “By introducing scholarships to fifth graders that may not have the opportunity to skate without this program in place, we envision a new wave of hockey players in the city of Worcester for many years to come. Superintendent Maureen Binienda and her staff for her unwavering support and all of our sponsors to make this program a success.”

“The Worcester Public Schools generously thanks the Worcester Railers for hosting our students in the Skate to Success Program.  It is an exciting opportunity for all of our fourth-grade students to receive free skate lessons from professional athletes,” said Worcester Public Schools Superintendent Maureen Binienda.“Our teachers and students have given the program rave reviews and we look forward to the continued partnership with the Railers.”

The Railers return home on Friday, Nov 2 vs. the Adirondack Thunder on a 2-3-4 Friday!  Enjoy $2 popcorn, $3 sodas, and $4 Bud Lights in the Bud Light Lounge.  The Railers will host GUNS N HOSES NIGHT on Saturday, Nov 3 with a special appearance by Ray Bourque presented by Berkshire Bank! Tickets as low as $15!  Doors open at 4pm for the Worcester Police vs Fire game followed by the Railers and Growlers at 7pm.