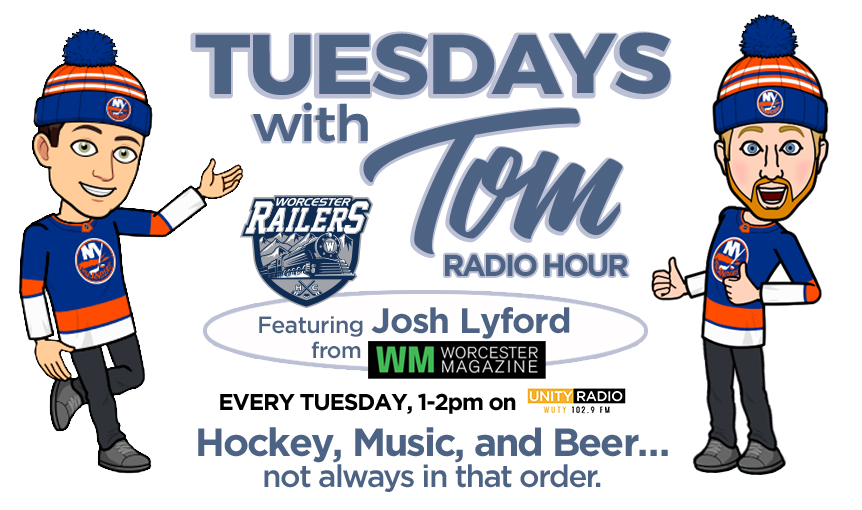 The Worcester Railers HC’s public relations and social media coordinator, Tom Matthews, will host the show, alongside co-host Josh Lyford. Matthews hosts a weekly video series titled “Tuesdays with Tom,” which showcases everything Railers hockey and the city of Worcester. A former Worcester Magazine reporter, and Worcester native, Matthews is teaming up with longtime Worcester Magazine reporter, Josh Lyford, who now serves as culture editor. Lyford is a passionate hockey fan that has played in various bands over the years and currently fronts local hardcore band Foxfires.

“The Railers are excited to add another platform to provide more access to our fans on everything Railers hockey,” said Worcester Railers HC vice president of communications and marketing Eric Lindquist. “We would like to thank Unity radio and Worcester Magazine for their collaboration to make the Tuesdays with Tom radio show and podcast a reality.  I think our fans will really enjoy the show and it will help us expand or fanbase throughout many different channels.”

The Tuesdays with Tom Radio Hour featuring Josh Lyford is available to listen on all major podcast platforms including iTunes, Spotify, Soundcloud, and more. Catch the show weekly on-air 1-2pm at 102.9FM or livestream at WorcesterMag.com. Click HERE to listen now!

About Unity Radio:
Unity Radio WUTY 102.9 FM “Worcester’s Community Connection”, will serve several educational purposes, including but not limited to: Providing a laboratory for students/volunteers to learn about non-commercial radio broadcasting, by giving them direct access regarding producing the audio programming for the station. Youth volunteers will learn audio technical skills and be exposed to the creative process of non-commercial educational broadcasting. Making available to the local community non-commercial programs that are not carried on any other station in the local market. This will include local public affairs programs, forums for discussion, alternative/independent news, independent/progressive music artists, and educational programming.

On Friday, Nov 23 the Railers host the Manchester Monarchs on a 2-3-4 BLACK FRIDAY at 7pm! The Railers will wear a special Marvel Super Hero Black Panther jersey and fans can enjoy $2 popcorn, $3 soda, and $4 Bud Lights in the Bud Light Lounge! Individual tickets start as low as $15!

BLACK FRIDAY with the Worcester Railers