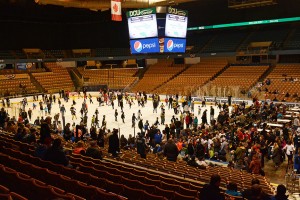 Fan Fest 2016 is a free party for the whole family.  The event will take place at The DCU Center in Worcester, MA from 1pm to 4pm.  The event will feature live music, free public skating, free giveaways, the Hockey Hall of Fame from Toronto, the Kelly Cup (award for the ECHL Champions), free food, games, and autographs with the Boston Bruins Alumni.  There will be a chance to win 50-yard line tickets to the New England Patriots NFL home opener game, as well “The Chris Conte Band,” featuring Sam James from “The Voice.”

At 2:00 PM, the team will announce the name of the Pro Hockey Club and unveil the Worcester crest.

Mascots that will make an appearance that day include Wally from the Boston Red Sox, Pat from the New England Patriots, and the legendary Jake from the Worcester Bravehearts.

Everyone is invited to Fan Fest 2016 and it is all free of charge! Be part of history and be part of Central Mass’ Pro Hockey Team by reserving your spot as a Founding Member of the Hockey Club! The first 1,000 members to place a $50 deposit for season tickets will be included in a once-in-a-lifetime opportunity to be part of the Founders Circle.  Enjoy special privileges such as up to 25% off your HC Membership price, priority seating based on your membership number, and so much more!