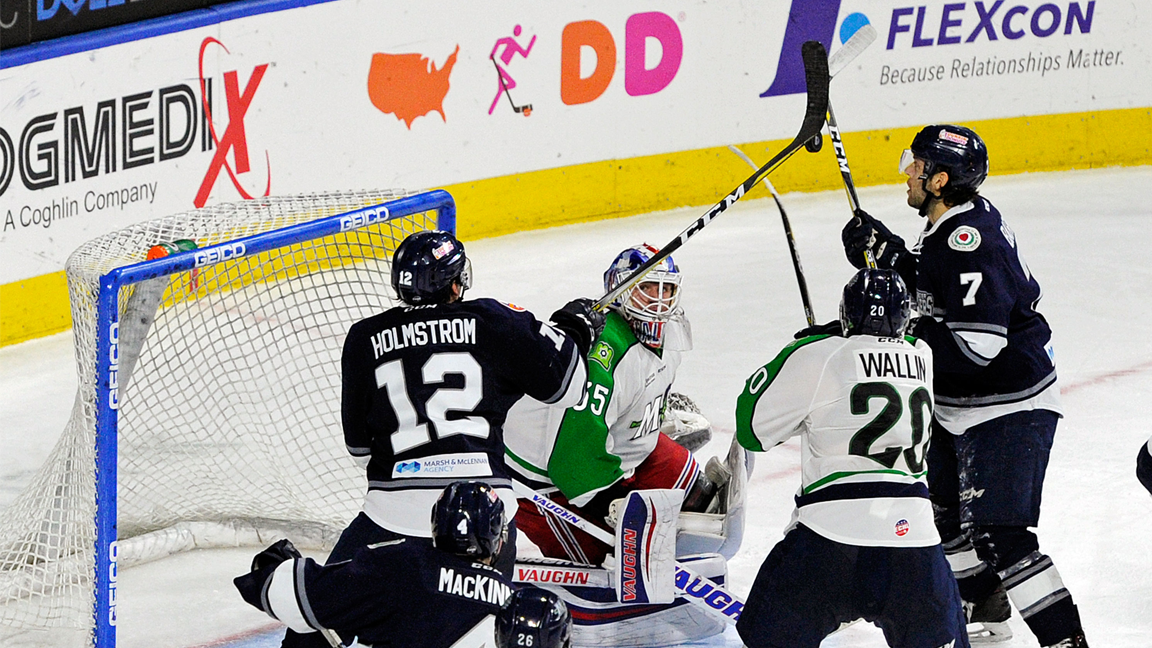 Meeting 3 of 14 vs. Maine this season

Worcester gets frustrated in 3-1 road loss in Maine

Worcester, MA – The Worcester Railers HC(3-8-1-0, 7pts) had another solid effort but dropped a frustrating 3-1 decision to the host Maine Mariners (5-5-0-1, 9pts) in front of 5,003 fansat the Cross Arena on Saturday evening. The Railers return home on Wednesday at 10am vs. the Royals to kick off a busy four game in five-day stretch at the DCU Center.

Barry Almeida gave the Railers a 1-0 lead in the first period while Evan Buitenhuis made 31 saves in net.  Brandon Halverson made 32 saves for the Mariners in his second win of the season and Maine rattled off three unanswered goals as the Railers dropped to 0-6-1-0 in their last seven games overall.

Barry Almeida (4th) gave Worcester a 1-0 lead at 17:50 after a great entry into the zone by Tyler Barnes who carried in down the rightwing side and fed Almeida from behind the net.  Maine would tie the score at 19:14 on the powerplay as Scott Savage (2nd) fired a wicked one-timer from the right circle assisted by Sean Day and Drew Melanson.  Shots were 10-9 in favor of Maine through 20 minutes of play.

Worcester outshot Maine 18-12 in a scoreless second period as both goaltenders made several nice stops to keep the game tied 1-1 through 40 minutes of play.

The Mariners would grab their first lead of the game as Mike McNicholas (1st) scored his first professional goal at 6:51 of the third period to give Maine the 2-1 advantage. A near line brawl broke out at 14:46 after Railers captain Mike Cornell was cross checked in the corner and despite the Railers down a skater, the penalty calls were evened off.  Maine put in an empty netter when the Railers were on the power play at 17:37 as Ryan Culkin (2nd) fired a bullseye from 200 feet.

Notes: Three Stars: 3rd star: Scott Savage (1-0-1) 2nd star: Mike McNicholas (1-0-1) 1st star: Brandon Halverson (32 saves, Win)….Final shots were 34-33 in favor of Maine…. Brandon Halverson (2-3-0-1) made 32 saves on 33 shots for Maine…. Evan Buitenhuis (1-3-1-0) made 31 saves on 33 shots for Worcester while Jason San Antonio served as the emergency backup…. Worcester went 0-for-4 on the power play while Maine went 1-for-5…. Tommy Kelley (inj), Yanick Turcotte (inj), Connor Doherty, Alex Vanier, Malcolm Gould, and Mitch Gillam (inj) did not dress for Worcester…. Jeff Kubiak is currently on recall with the Bridgeport Sound Tigers…. before the game forward Tommy Tsicos was released and the Railers signed forward Malcolm Gould…. Barry Almeida has scored in back-to-back games for the Railers and led the club with five shots on goal…the Railers have just 10 goals in their last seven games… Worcester falls to 2-6-0-0 on the road this season.

The Railers return home for a busy four home game in five-day stretch beginning on Wednesday, Nov 14 at 10am vs. the Reading Royals with the second annual School Day Game sponsored by Worcester Telegram and Gazette’s Newspapers in Education program.

On Thursday, Nov 15 the Railers host the Thunder at 8pm on College Night presented by Chipotle! The 1st1,000 fans will receive a BOGO burrito offer from Chipotle and the Railers will host the largest t-shirt toss in Worcester’s pro hockey history in the first intermission – 1 t-shirt will contain $500! College tickets start at just $10 with a college ID!

On Saturday, Nov 17 the Railers host the Orlando Solar Bears at 7pm on a BIG GAME SATURDAY with NE Patriot Matthew Slater signing autographs presented by Energy Monster from 6-8pm!  The doors will open at 3pm for the Worcester Blades vs. Montreal Canadiens at 3:30pm. 1 ticket gets you entry into both games starting at just $15!