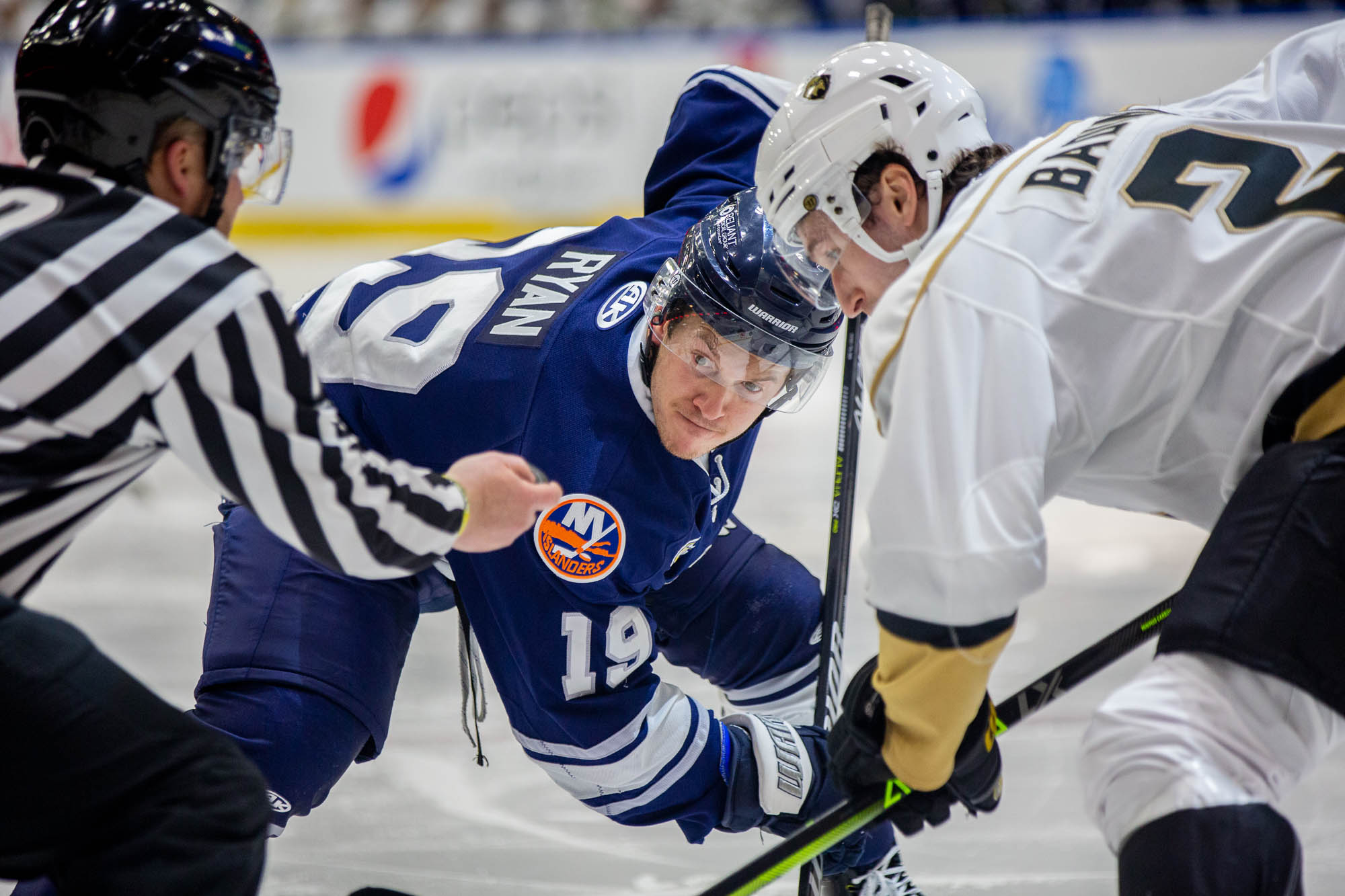 Meeting 9 of 12 vs. Newfoundland this season

Worcester got on the scoreboard first again tonight. This time it was Nolan Vesey (11th) who got the opening tally. Zack Bross found Vesey in the neutral zone, Vesey skated the puck across the blue line and fired a wrist shot at Luke Cavallin that set off the buzzer. The Railers made it a two-goal game when Collin Adams found Nick Fea (2nd) wide open in front of Cavallin, who tapped the puck into the net for an easy score. That was the last score of the first period, with Worcester leading 2-0. The Railers were getting outshot 18-7 through the first.

Three minutes into the second period the Railers hopped on their third consecutive powerplay after Simon Kubicek was whistled for slashing. The Growlers had a good chance to score a shorthanded goal, but Brent Moran made a spectacular sliding pad save to keep the Growlers scoreless. On the counterattack, Quinn Ryan took a stick to the face which cut him open on the ice. Play paused as the ice crew had to clean up the blood on the ice while Quinn Ryan went to the locker room to be cleaned up. He ultimately returned to the game. With eight minutes left in the second period, the Growlers got on the board for the first time when Matt Sredl (2nd) fired one past Brent Moran. Shortly later Zach O’Brien (16th) scored the tying goal of the game for the Growlers. The Growlers took the lead when Pavel Gogolev (13th) scored giving the Growlers their first lead of the game. The three goals for Newfoundland came 3:16 apart to help end the second period 3-2 Growlers. Newfoundland outshot Worcester 17-10 in the second and were outshooting the Railers 27-16 through two.

Worcester entered the third period down by one. The Railers tied the game thanks to a Christian Evers (1st) slap shot soaring past Cavallin. This was also Evers’ first professional goal. Quinn Ryan (11th) took the lead back for Worcester after receiving a pass from his longtime friend Nick Fea and firing a wrist shot into the back of the goal. Pavel Gogolev (14th) didn’t allow the Railers to have the lead for too long as he tied the game back up two minutes after Ryan scored. The Growlers extended their lead when Keenan Suthers (8th) scored. Brent Moran was pulled from the net to get an extra skater, but this opened up a chance for Todd Skirving (15th) to score on the empty net and give the game its final score of 6-4. Worcester was outshot 13-7 in the third, and 40-23 on the game.

3rd Star: Keenan Suthers (1-0-1 3 shots). 2nd Star: Quinn Ryan (1-2-3 4 shots). 1st Star: Pavel Gogolev (2-0-2 5 shots). Final shots were in favor of Newfoundland 29-23. Luke Cavallin had 23 saves on 19 shots for the Growlers. Brent Moran made 39 saves on 34 shots for Worcester while Henrik Tikkanen served as the backup. Worcester went 0-for-4 on the power play while Newfoundland went 0-for-1. Bobby Butler (DNP), Reese Newkirk (DNP), Anthony Repaci (DNP), Liam Coughlin (DNP), Jack Quinlivan (IR), Phil Beaulieu (IR), and Blake Christensen (IR) did not dress for Worcester. Jake Schultz led the team in shots with 6. The Railers are now 11-21-2-2 all-time vs the Newfoundland Growlers and 4-13-1-1 at the Mary Brown’s Center against Newfoundland.

Worcester Falls 4-3 in Overtime to the Growlers