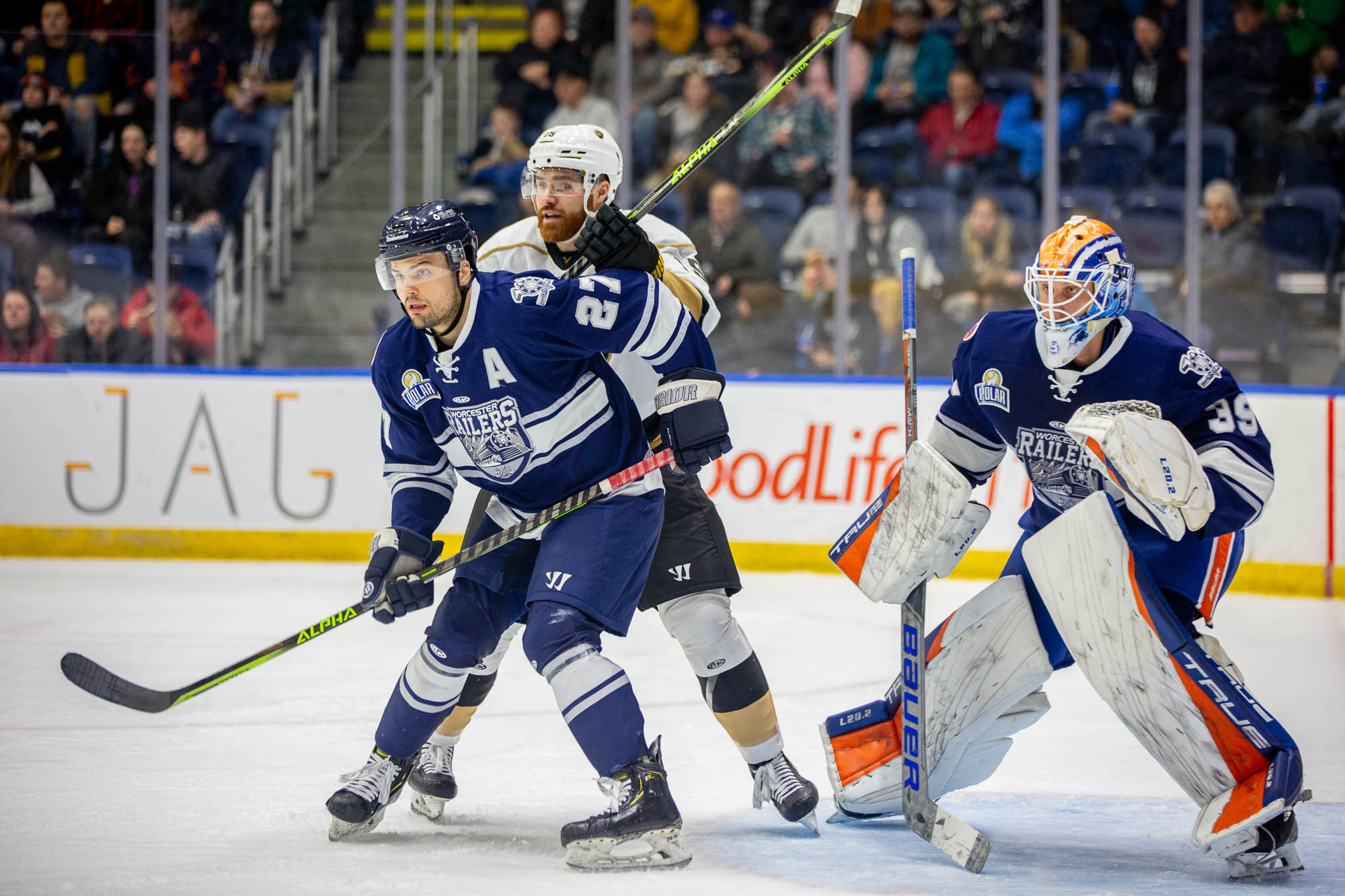 Meeting 8 of 12 vs. Newfoundland this season

Worcester Falls 4-3 in Overtime to the Growlers

Jake Schultz (1-0-1) got the Worcester Railers on the board first tonight eight minutes into the first period. Jordan Kaplan (1-0-1) scored the next goal for Worcester on a power play. The Growlers scored the next two goals of the game late in the first from Zach Solow (1-0-1) and Jack Badini (1-0-1). Nick Fea (1-0-1) scored his first ECHL goal to open the second, while Isaac Johnson came back and tied it up 3-3 minutes later. After neither team scored in the third period, Newfoundland notched a powerplay goal early in overtime to give the Growlers the win, 4-3.

The Worcester Railers got on the board first tonight with two goals in the first period. The first goal was scored by Jake Schultz (2nd) he picked up the rebound off Keith Petruzzelli’s pad and fired a wrist shot off, scoring the first goal of the game. The second goal for Worcester was scored by the newest member of the team Jordan Kaplan (1st). Kaplan, who was recently put on waivers by Newfoundland, found himself on the crease when the puck ended up on his tape and he tapped it in past Petruzzelli. Giving the Railers a two-goal lead. The second half of the period was all Newfoundland. They scored two goals of their own after firing 18 total shots at Henrik Tikkannen. The first Growler goal was scored by Zach Solow (12th). The second Growler goal was scored by Jack Badini (3rd) with thirty seconds left in the 1st period. Worcester was outshot 18-7 in the first period.

The game was tied 3-3 heading into the third. Halfway into the third period Reece Newkirk and James Melindy got into it and the officials sent them both to the penalty box, which set up a four-on-four for two minutes. Forty seconds into that four-on-four, Quinn Ryan was whistled for hooking sending him to the box for two minutes, and put the Growlers on a four-on-three powerplay. A Growler skated into Tikkanen knocking the goal out of place stopping play for a short while. Luckily no glycol lines were drilled into as they were earlier in the season in Norfolk, so play resumed within a few minutes. Worcester successfully killed the four-on-three and then the five-on-four thanks to Henrik Tikkanen making multiple spectacular saves. Jordan Kaplan was sent to the penalty box for cross-checking, putting the Railers back on the penalty kill. The Railers killed their fifth straight penalty in this game, thanks again to Tikkanen. With three minutes left in the game, Pavel Gogolev was whistled for cross-checking putting the Railers on the powerplay for the third time on the night. While on the powerplay, Reece Newkirk and Simon Kubicek were both sent to the penalty box for slashing and holding respectively to make it a four-on-three for fifty seconds. The Railers were unable to score on the powerplay. At the end of regulation, the game was tied up 3-3 sending it to overtime. Newfoundland outshot Worcester 37-19 through regulation.

Shortly into overtime Myles McGurty was whistled for elbowing putting the Growlers on their sixth powerplay of the game. The Growlers converted on this powerplay thanks to a slapshot by Pavel Gogolev sneaking past Tikkanen for the win 4-3.

3rd Star: Isaac Johnson (1-2-3 5 shots). 2nd Star: Henrik Tikkanen (37 saves on 41 shots). 1st Star Pavel Gogolev (1-0-1,  7 shots, GWG). Final shots were in favor of Newfoundland 41-19. Keith Petruzzelli made 16 saves on 19 Shots for the Growlers. Henrik Tikkanen made 37 saves on 41 shots for Worcester while Brent Moran served as backup. Worcester went 1-for-3 on the power play while Newfoundland went 1-for-6. Bobby Butler (DNP), Anthony Repaci (DNP), Jack Quinlivan (IR), Phil Beaulieu (IR), and Blake Christensen (IR) did not play for Worcester. Collin Adams led the team with 5 shots on goal. The Railers are now 11-20-2-1 all-time vs the Newfoundland Growlers and 4-12-2-1 at the Mary Brown’s Center against Newfoundland.