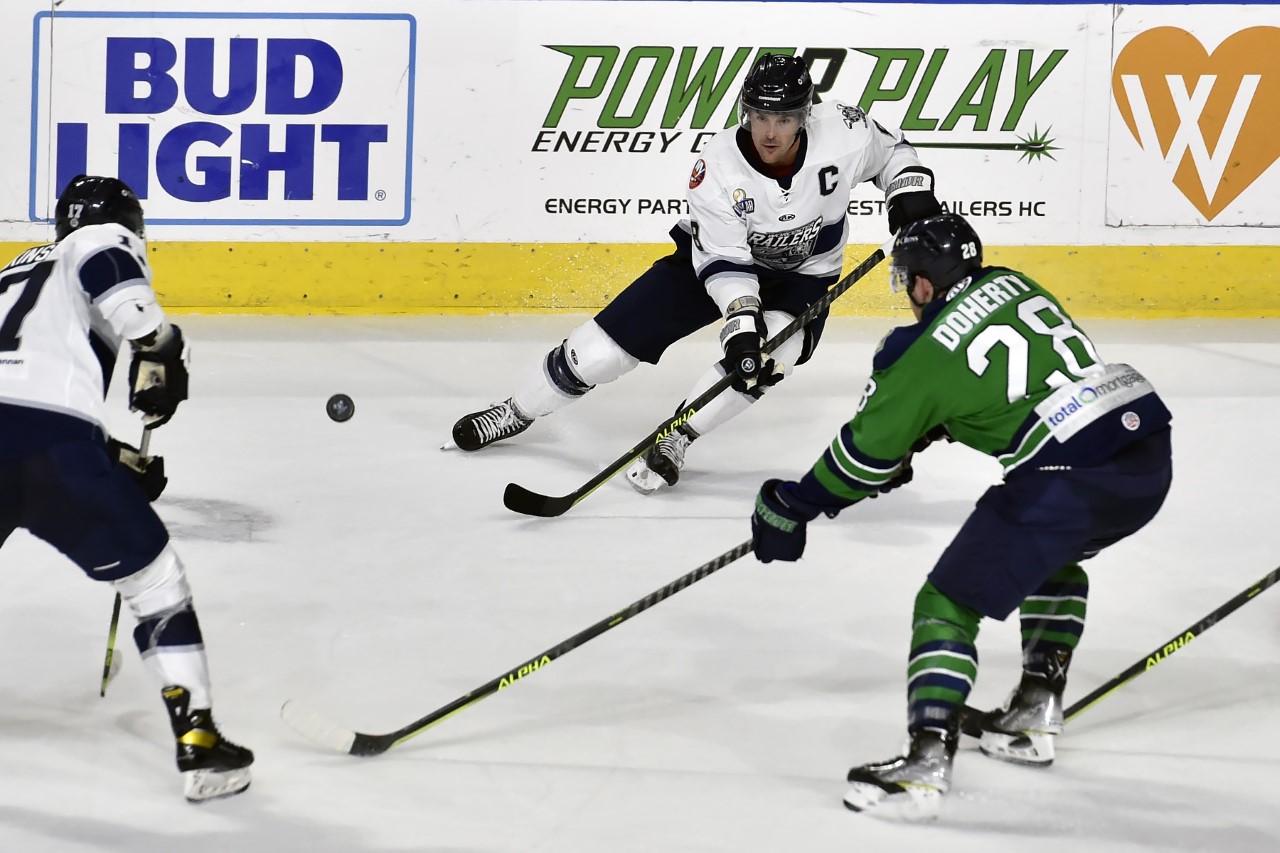 By Bill Ballou
WORCESTER – This particular holiday celebration has become New Year’s Evil for pro hockey here.
The Railers continued the city’s lack of success on New Year’s Eve Saturday night when they lost to the Maine Mariners, 6-2. The Railers are 0-4 on Dec. 31s since they arrived in town. The Sharks and IceCats were only slightly better.
Bottom line? Worcester teams are 3-12-1 on New Year’s Eve through the decades and have never won at the DCU Center.
The Mariners of December are playing like the Railers of October and December and finished the month with a 9-2-0 record, playing assertive hockey backed by solid goaltending. Saturday night they got goals from Mathew Santos, Cam Askew, Alex-Olivier Voyer, Patrick Shea, Reid Stefanson and Marc-Olivier Duquette.
Duquette’s was into an empty net.
Bobby Butler, who at 34 was the oldest player on the ice for either team, was the best player on the ice for the Railers and had both their goals. He leads the team with 13.
Worcester has lost five in a row and allowed 26 goals in its last four defeats. The Railers are 2-10-0 in their last 12 games.
Maine dominated the first period. The Mariners’ 18-8 edge in shots on goal was a fair barometer of how things went, but Butler’s late goal allowed the Railers to carry some momentum into the break.
Santos’ wrist shot from 35 feet gave Maine a 1-0 lead at 6:43, the goal coming just 10 seconds after the Mariners went on a power play. Askew made it 2-0 at 14:22, beating Henrik Tikkanen from between the circles.
Butler scored at 19:55, snapping a wrist shot past Francois Brassard from the right dot with the teams skating 4 on 4. He was set up by Trevor Cosgrove’s long pass from deep in the Worcester end.
Any Worcester momentum was short-lived as Voyer made it 3-1 for Maine at 1:53 of the second period. Butler scored again, this time from the left circle, at 14:51 to bring the Railers to within a goal. Then the Mariners scored the kind of killer goal Worcester specialized in early in the season as Shea restored Maine’s two-goal lead by beating Tikkanen from 15 feet at 15:17.
Stefanson got another early Maine goal as he made it 5-2 at 3:34 of the third period the Duquette scored his first of the season at 14:10 after Railers coach Jordan Smotherman pulled Tikkanen with Worcester going on a power play.
MAKING TRACKS – The game marked the return of linesman — the description according to the box score — Laura Schmidlein. She made history on Dec. 11, 2021 as the first female official in league history. A month later, she broke a leg working a game at the DCU Center and missed the rest of the season. Sunday was her first game back. … Despite the recent skid the Railers had a good 2022. They were 42-31-7 for the calendar year. … Worcester plays at Maine Sunday afternoon with the puck drop at 3:05. The Railers’ game in Portland last week was a 9-3 loss with the Mariners getting same-game hat tricks from Tim Doherty and Voyer. That was the first time that happened in 1,989 Worcester pro games, playoffs included. …  With the return of Cosgrove and Blade Jenkins, who also had an assist,  Worcester released forward Jake Schultz after one game. Schultz was the first player the Railers ever signed directly from the Federal League. … The referees were veterans Casey Terreri and Sam Heidemann. It marked the first time ever the Railers had two refs in a regular-season game at home.
https://railershc.com/wp-content/uploads/2022/12/Butler2.jpeg 853 1280 admin /_media/2021-22/logo.png admin2022-12-31 20:36:042022-12-31 20:36:04Worcester Ends 2022 with 6-2 Loss to Mariners