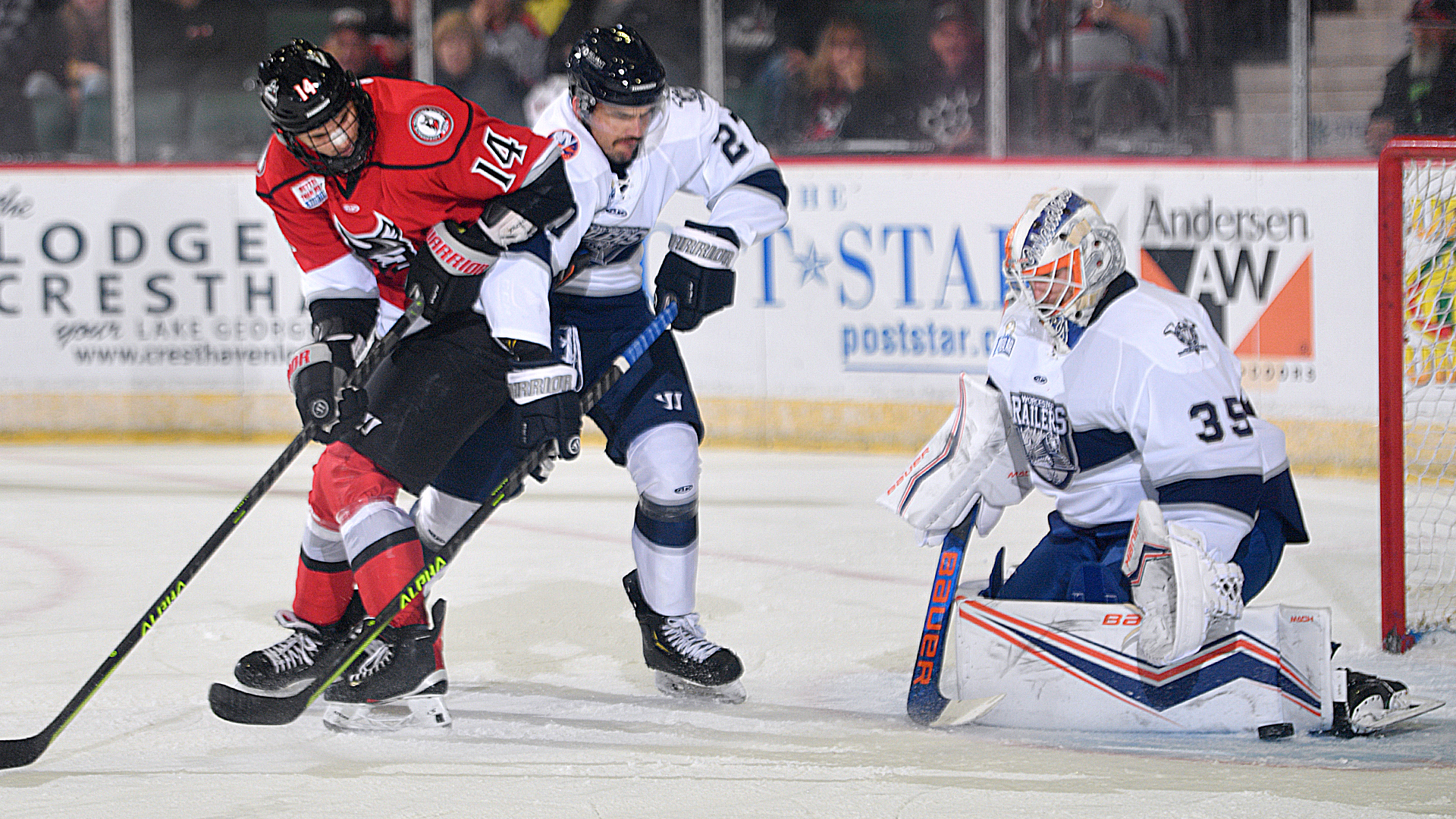 Meeting 5 of 17 vs. Adirondack this season

It was the sixth time this season that Worcester scored the game’s first two goals. Quin Ryan (1-0-1) and Jared Brandt (1-0-1) came out in the first and netted their second goal of the season each to make it 2-0 Worcester 11:21 into the period. Adirondack then answered back with four unanswered goals, including two from some homegrown talent. Matt Steif (1-0-1), Adirondack’s newly acquired defenseman from Idaho scored in the first to make it 2-1 heading into the second. Glens Falls, NY native Shawn Weller (2-0-2) then found the back of the net twice in the second, tying the game and then giving the Thunder the lead at 3-2 ahead of the third period. Former Railer Grant Jozefek (1-0-1) put the final nail in the coffin as he broke free on a one-man rush and beat Ken Appleby glove side to make it 4-2 Adirondack. Steve Jandric (1-2-3) found the back of the net with just 22 seconds remaining on a flip pass from Collin Adams which Jandric then batted into the net to give the game its final score of 4-3.

Quin Ryan (2nd) scored for the second time all season long off an impressive one-man effort in which he wrestled through the Adirondack defense, then beat Jake Theut far side to make it 1-0 Worcester. Jared Brandt (2nd) then made it 2-0 off a one-timer. Brandt released a slapshot from the point where he hammered one past Thuet through traffic to open Worcester’s lead. The Thunder struck back thanks to Matt Steif (1st) beating Appleby to cut into the Railers lead and make it 2-1 Worcester going into the first intermission. Shots favored Adirondack 14-8 through the game’s first 20 minutes.

Glens Falls’ very own, Shawn Weller (1st) got on the score sheet for the first time in his season debut for Adirondack, tying the game 2-2 4:49 into the second period. Weller (2nd) continued his offensive touch in the period, as both he and Ryan Smith broke down ice on a two-on-one. From the near corner, Smith sauced a perfect pass onto the tape of Weller to find him back-door to tap it home and put Adirondack up 3-2 headed into the 3rd. Shots in the second were nodded up at 9 apiece, while Adirondack continued to outshoot Worcester 23-17.

Worcester was met with a familiar face on Friday night in Grant Jozefek. The forward played in 14 games last season for the Railers, scoring a single goal and tallying three assists. Jozefek (1st) sprung down the ice on a perfect feed from Noah Corson, then proceeded to beat Appleby’s glove side and make it 4-2 Thunder. With the Railers on the power play and net empty, Steve Jandric (1st) batted a flip pass from Collin Adams past Theut to get the Railers back to within one with 22 seconds left. Off the draw, Worcester failed to get the puck back into the attacking end, as the game ended with the final score of 4-3.

Railers Hold on In Shootout, Beat Thunder 3-2
Scroll to top