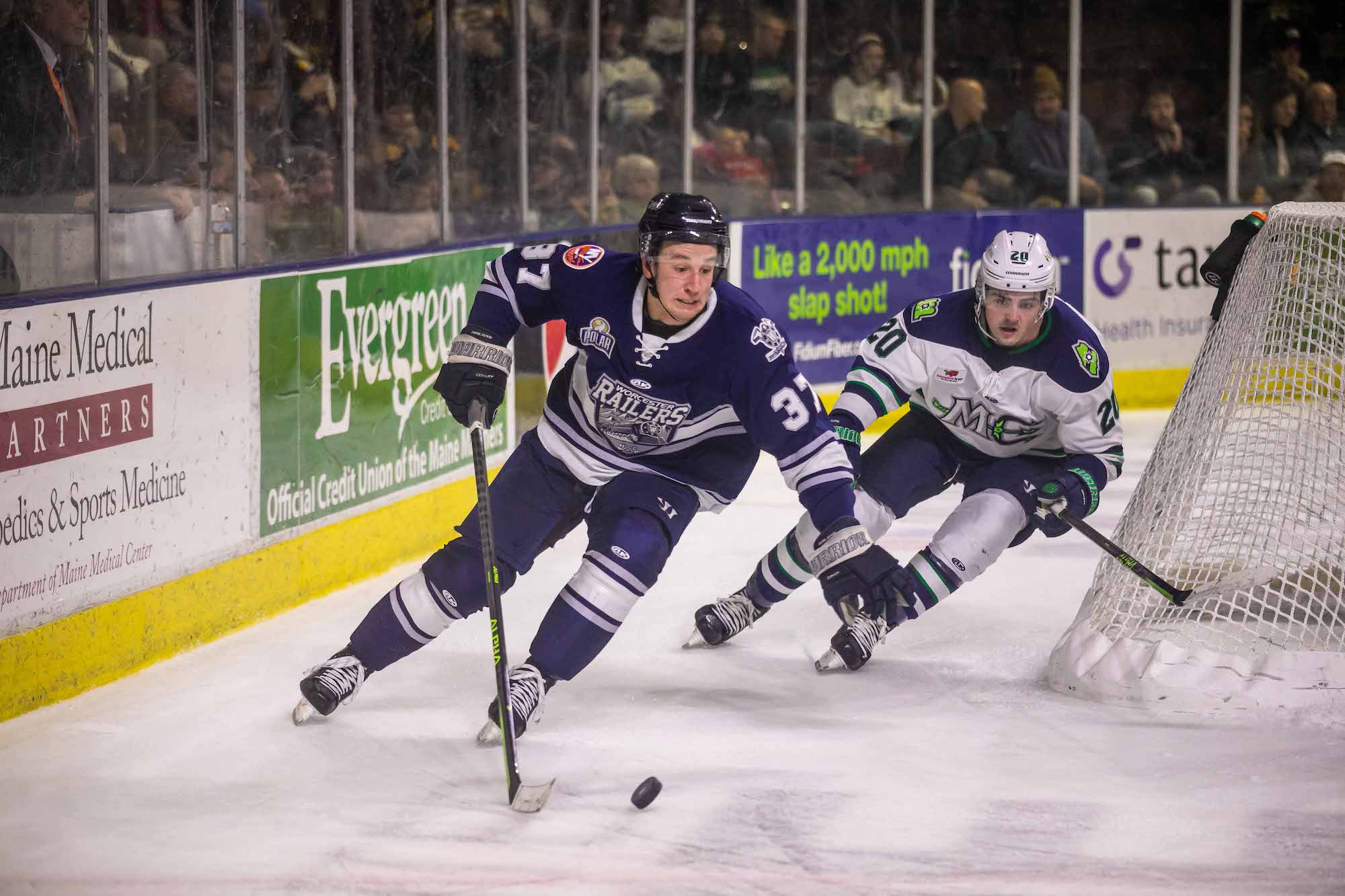 Meeting 1 of 10 vs. Maine this season

Railers are 0-1-0-0 against the Mariners

Reece Newkirk (1-0-1) scored two minutes into the contest on Worcester’s first shot of the game with the assist going to Zack Bross (0-1-1). The Mariners matched just three minutes after as Cam Askew (2-0-2) scored off a rebound. Worcester scored the next goal of the game four minutes into the second period. Anthony Repaci (1-0-1) fired a one-timer off a pass from Blake Christensen (0-1-1). Maine then continued to pour on scoring as Alex-Oliver Voyer (3-1-4) and Tim Doherty (3-1-4) both scored a hattrick. Quinn Ryan (1-0-1) scored on a five-on-three power-play opportunity for the Railers in the third before Mitch Fossier (1-0-1) scored late in the period as the game ended 9-3, Maine.

The Railers got started early on Wednesday, scoring two minutes into the contest. Billy Jerry and Zack Bross found themselves on a two-on-three break. Jerry sent a pass to Bross along the boards behind Francois Brassard in net for Maine. Bross received the puck behind the goal and then found Newkirk (12th) in the slot. Newkirk received the pass and fired it on net, setting off the horn to make it 1-0 Worcester. Maine didn’t take long to get on the board afterward. Three minutes after Newkirk’s goal the Mariners were on the attack which resulted in Cameron Askew (4th) putting one in the back of the net and tying the game 1-1. Halfway through the first period, the Railers hopped on the powerplay after Maine got whistled for too many men on the ice. With five seconds left on the power play, Bobby Butler was sent to the penalty box putting Worcester on the penalty kill for the first time. The Railers successfully killed it off and made it five-on-five with five minutes left to play. With less than two minutes left in the first, Fedor Gordeev was whistled for tripping, which put the Railers on the power play for the remainder of the period. Worcester was able to put some good pressure on the Mariners, but they were not able to score as time ran out in the first period. Worcester was outshot 17-10 in the first.

The Railers started the second period with a few seconds left on the power play, but nothing came from the brief five-on-four. The action started very quickly as both teams had very good looks at the net but both goalies made spectacular saves to stop the puck from entering the net. Maine’s Nick Issacson was whistled for tripping sending him to the penalty box and putting Worcester on their third power-play of the game. On the man advantage, Antony Repaci (6th) fired a one-timer on net for the goal. Blake Christensen and Artur Terchiyev were both credited with assists. That would be the first point for Terchiyev in a Railers Uniform, having just joined the team from the SPHL’s Birmingham Bulls. Camron Askew (5th) then recorded his second goal of the game, tying it up at two. The Mariners took their first lead of the game when a rebound led to Alex-Oliver Voyer’s (5th) first goal of the game.  Fifty seconds later, Voyer (6th) found himself skating towards Tikkanen and beat him with a wrist shot making it 4-2 Mariners. Tim Doherty (10th) scored the fifth goal for the Mariners when he found himself left alone out in front of Tikkanen with 9:16 remaining in the second period. Alden Weller was whistled for cross-checking to put the Railers on the powerplay for the fourth time on the night. After an unsuccessful power play for Worcester, Weller found the puck right out of the box. He took the puck and skated all the way up the right side of the ice and fired one at Tikkanen. Tikkanen made the save but Tim Doherty (11th) was on the clean-up crew, putting the puck in the back of the net to put Maine ahead 6-2. That was the end of Tikkanen’s night he faced 35 shots and made 29 saves in thirty-seven minutes of play. Brent Moran stepped in between the pipes for the first time in a Railer uniform. Worcester was outshot 18-9 in the second and 35-19 for the game.

Forty-eight seconds into the third period the Mariners picked up right where they left off. Voyer (7th) took advantage of a bad pass by Worcester in their own zone and scored his third goal of the game. Tim Doherty (12th) got his third of the game when Moran tried to play the puck behind his own net. Doherty stole it from Moran and scored on the open net. Myles McGurty took a huge spill in the corner in which his helmet came off when he was boarded by Isaacson. McGurty skated off under his own power but went straight to the locker room. As Isaacson was sent to the box for five minutes, Maine was whistled for another penalty making it a five-on-three for Worcester. Quinn Ryan (10th) capitalized on the five-on-three when he fired one top-shelf past Brassard. Moran was pulled from the goal to give Worcester a six-on-four-man advantage during the remainder of the five-minute major. He was sent back to the goal just before the power-play ended. With five minutes left to play, Mitch Fossier (2nd) scored his first goal of the game when he was found backdoor to give the game its final score of 9-3.