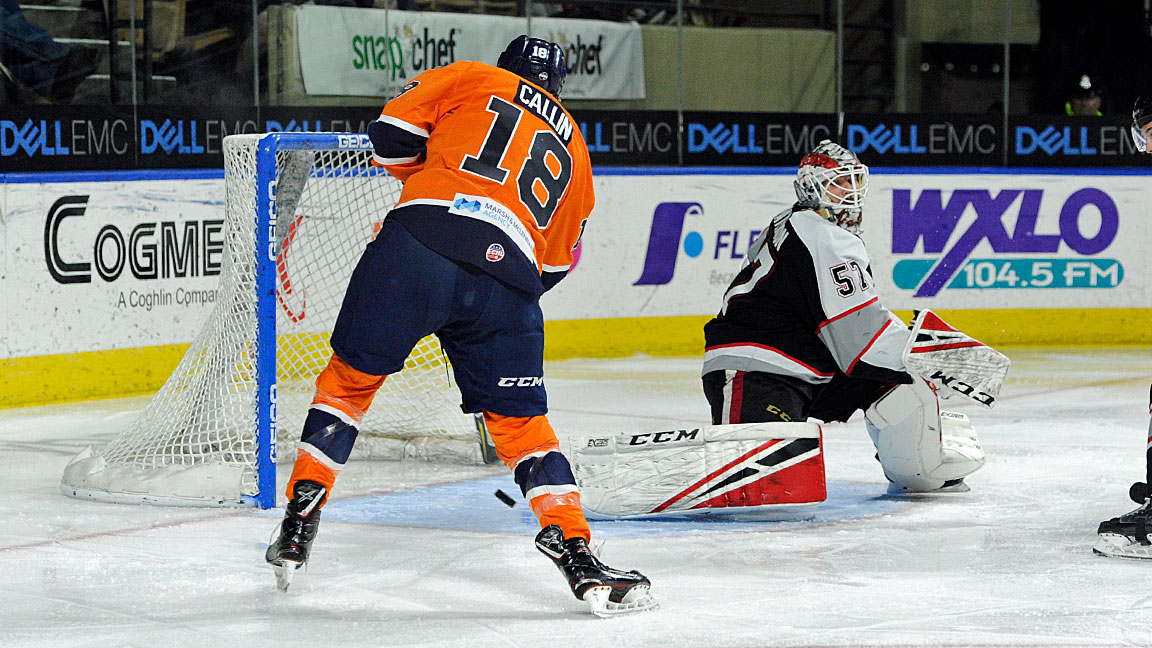 Brampton Beast at Worcester Railers HC
March 31, 2019
DCU Center
Meeting 8 of 8 vs. Brampton this season
Railers went 3-3-1-1 vs. the Beast this season

Worcester, MA– The Worcester Railers HC (30-28-6-4, 70pts) led 4-2 through 40 minutes of play before allowing five third period goals in a 7-4 loss to the visiting Brampton Beast (35-28-5-1, 76pts) in front of 4,263 fans at the DCU Center on Sunday afternoon. With the loss, the Railers are now six points behind Brampton for the fourth and final playoff spot in the North Division with four games remaining. Worcester will host the Manchester Monarchs on Wednesday at 7pm.

Drew Callin scored twice while Tyler Barnes and Mike Cornell (1-1-2) also got goals for Worcester as Mitch Gillam made 24 saves in net in the loss. Daniel Leavens and Daniel Ciampini each scored twice for Brampton while Jake Paterson made 28 saves in net as Worcester dropped their sixth straight game (0-5-1-0) overall. Worcester led 3-1 and 4-2 before Brampton grabbed five unanswered goals in the final frame as the Railers playoff chances took a devastating blow with the regulation loss.

The Railers exploded for three goals in the first period to grab a 3-2 lead through 20 minutes of play. Drew Callin (2nd and 3rd) scored twice in the first seven minutes of play while Tyler Barnes (28th) gave the Railers a 3-1 lead at 7:48 with a nice deflection. Daniel Leavens (10th) struck for the Beast while Jonathan Racine (6th) scored the 5th goal of the period at 12:08. Shots were 11-10 in favor of Brampton in the first.

Worcester had six power plays which included three 5-on-3s in the second period as Mike Cornell (5th) scored the only goal of the frame with a 40-foot slapper at 8:03 to put the Railers ahead 4-2. Worcester had a 23-19 shot advantage through 40 minutes of play.

Notes: Three Stars: 3rd star: Daniel Leavens (2-0-2) 2nd star: Drew Callin (2-0-2) 1st star: Daniel Ciampini (2-1-3, +4) …. final shots were 32-31 in favor of Worcester…Jake Paterson (11-12-1) made 28 saves on 32 shots Brampton… Mitch Gillam (19-16-5) made 24 saves on 26 shots for Worcester….Blake Wajtala was the backup…. Worcester went 1-for-7 on the power play while Brampton went 0-for-3…. Kyle McKenzie (inj), Tommy Panico (inj), Alex Vanier (inj), Evan Buitenhuis (inj), Matt Schmalz, Bo Brauer, Yanick Turcotte (susp), and Connor Doherty did not dress for Worcester….Mike Cornell (BRI) and Nick Sorkin (BNG) were both in the lineup for Worcester after their loan back from the AHL…. Railers are now 16-13-5-1 on home ice this season… the Railers have 4 games remaining (2 home, 2 road)… Worcester has 48 fighting majors this season – they had 45 last season…. Barry Almeida had five shots on goal for the Railers and now ranks 3rd in the ECHL with 262 shots on goal… before scoring three goals in the first 7:42 of the first period, Worcester had scored just three goals total in their previous 12 periods of play….Tyler Barnes leads the Railers with 28 goals….Mike Cornell, Ross Olsson, Ivan Chukarov, Barry Aleida, David Quenneville (2), and Matty Gaudreau all had assists for the Railers….it was the first time Brampton had scored five goals in a period all season…. The Railers have allowed 14 goals in their last two games and have allowed seven goals 4 times in their last 16 games….the Railers welcomed 9,863 fans at the DCU Center in the two games this weekend.

What’s on tap – JUST 4 GAMES LEFT
Wednesday, April 3 the Railers host the Manchester Monarchs at 7pm. Score $5 off any ticket at the DCU Center Box Office with your Price Chopper/Market 32 AdvantEdge card.

Individual tickets to a Railers game start as low as $15 by calling 508-365-1750 or visit RailersHC.com. Save $$$ with a RAILERS 6 PACK which includes six flex tickets and a Railers winter hat starting at $99.

Railers play like NY Jets in 7-0 loss to Beast