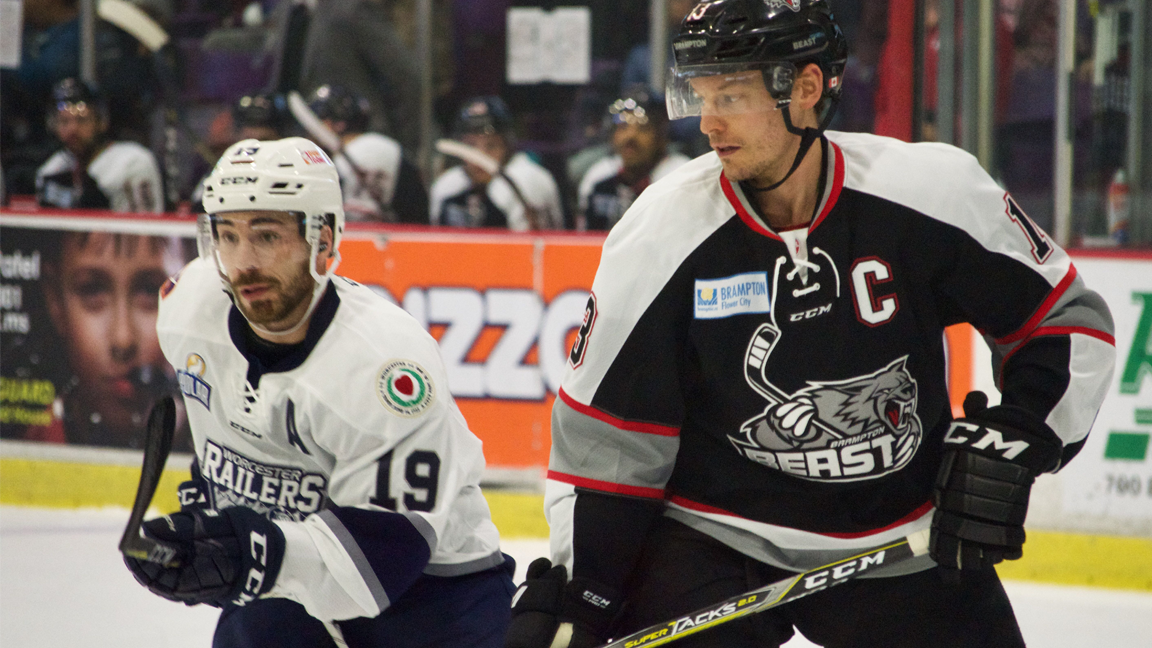 Meeting 2 of 8 vs. Brampton this season

Willick wins it in OT for Railers in Brampton

Mitch Gillam made 37 saves in net for the victory

Brampton, ON – Dylan Willick won the game at 3:39 of the overtime period as the Worcester Railers HC(7-10-2-0, 16pts) woke up early to defeat the host Brampton Beast (9-7-2-1, 21pts) by the score of 2-1 in front of 5,020 fansat the CAA Centre on Tuesday morning. The Railers close out their three-game road trip on Friday in Portland, ME vs. the Maine Mariners at 7pm.

Matty Gaudreau also scored for Worcester while Mitch Gillam, making his second straight start, was excellent making 37 saves in net.  Ryan Scarfo scored the only goal for the Beast while Marcus Hogberg made 29 saves in net as the Railers won their first ever game in Brampton.

There was a lot of action in the first eight minutes of the opening frame as there was a goal, fight, and a penalty shot as Brampton grabbed a 1-0 advantage. Rookie Ryan Scarfo (1st) scored at 4:59 with a quick shot from the center slot assisted by Aaron Luchik and Arthur Tianulin to put the Beast ahead 1-0.  Mitch Gillam would stop Erik Bradford on a penalty shot just 31 seconds later and Tyler Mueller would pick up his first pro fighting major vs. Ryan Scarfo at 7:26 in a rather physical first period of play.  Shots were 13-12 in favor of the Railers thought 20 minutes of play.

Matty Gaudreau (3rd) slammed home the equalizer from on top of the crease as he streaked down the rightwing side as Nick Bligh from behind the net found his tape at 3:50 to tie the score at 1-1. Shots were 9-8 in favor of the Beast in a rather lackluster middle frame as the two clubs went to the second intermission tied 1-1.

Both teams had some nice chances in the extra frame, but it was Dylan Willick (3rd) that slammed home his own rebound after a nice rush into the zone at 3:39 to give the Railers the 2-1 overtime victory.

Notes: Three Stars: 3rd star: Ryan Scarfo (Goal, Fight) 2nd star: Mitch Gillam (37 saves, Win) 1st star: Dylan Willick (OTG) …. final shots were 38-31 in favor of Brampton… Marcus Hogberg (0-0-1-0) made 29 saves on 31 shots for Brampton…. Mitch Gillam (3-6-0-0) made 37 saves on 38 shots for Worcester as he got his second straight start in net…. while Evan Buitenhuis served as the backup…. Worcester went 0-for-3 on the power play while Brampton went 0-for-1…. Tommy Kelley (inj), Alex Vanier, Tommy Panico, and Malcolm Gould (inj) did not dress for Worcester….Yanick Turcotte returned to the lineup after missing the last 15 games due to injury…Jeff Kubiak and Ryan Hitchcock are currently on recall with the Bridgeport Sound Tigers while Ivan Kosorenkov is on recall with the SJ Barracuda… the Railers are now 1-2-1-0 all-time in Brampton… Worcester improves to 3-7-0-0 on the road this season with two of the wins coming in OT…Nick Bligh and David Quenneville added assists for Worcester…it was the first win for Mitch Gillam since Oct 20….the Railers are now 1-0-0-0 when Tuesdays reads the starting lineup and wear an Austin Matthews jersey…Barry Almeida and Dylan Willick each had five shots on goal…the game started at 11am.

The Railers travel to Portland, ME to battle the Maine Mariners on Friday with a 7pm start. Worcester returns home on Sunday, Dec 2 on a KIDS GIVEAWAY SUNDAYwith a 3pm faceoff vs. the Mariners! The first 1,000 kids 12-and-under will receive a mini football courtesy of myOfficeCloud. Score a SUNDAY FUNDAY ticket pack which includes four tickets and four beers or four tickets with four sodas and popcorns starting at just $60.