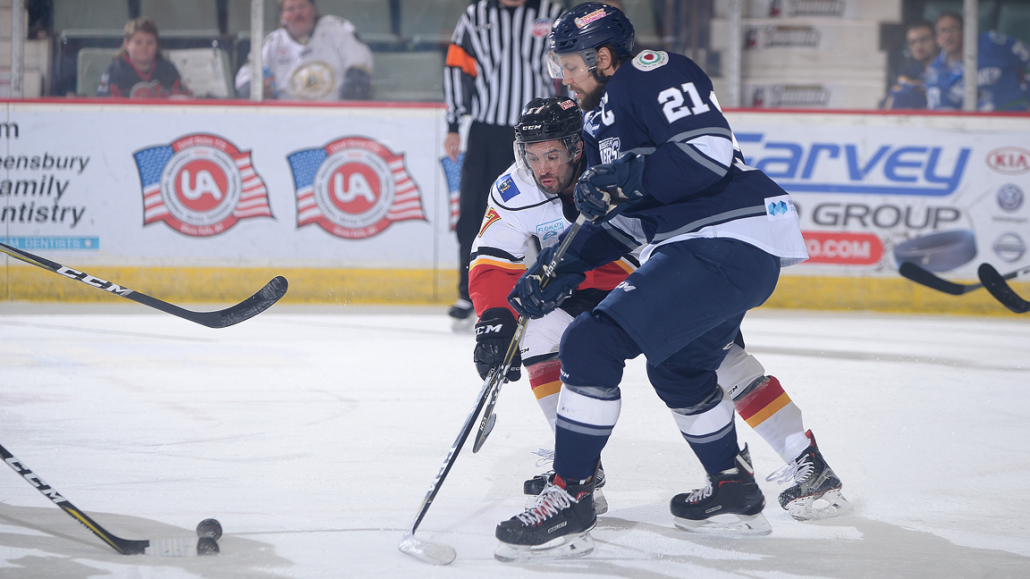 Meeting 3 of 12 vs. Adirondack this season

Patrick McNally scored twice and added an assist while Chris Langkow recorded two assists in the victory.  Mike Cornell and Woody Hudson also scored for the Railers while Mitch Gillam made 16 saves in net for the win.  Worcester tied a season high with four goals and scored three goals in a period for just the second time this season as the Railers moved back to .500 on the year.

Adirondack scored in the first and final minute of the middle frame to take a 2-1 lead.   Eric Neiley (9th) received the puck from behind the net and zipped it top shelf from on top of the crease past Mitch Gillam at 28 seconds to tie the score 1-1.  With six seconds left, Brian Ward (7th) rushed down the left side and snapped a quick shot from 15 feet to give Adirondack a 2-1 lead.  Each team had seven shots in the second period.

Patrick McNally (7th) tied the score at 2-2 at 3:07 and Woody Hudson (5th) scored on a rebound on the power play at 4:42 to give the Railers their first lead of the game.  Ben Murphy (3rd) tied the score at 5:40 with a quick shot from the right circle through a screen to make it 3-3.  Defenseman Patrick McNally (8th) began with the puck at the side of the net and went coast-to-coast and skated around the Thunder net before ripping a shot top shelf from the right circle at 19:35 to give the Railers a 4-3 road victory.

Notes: Three Stars: 3rd star: Eric Neiley (1-1-2) 2nd star: Brian Ward (1-1-2) 1st star: Patrick McNally (2-1-3) …Final shots were 40-19 in favor of Worcester… Chris Nell (0-1-0) made 36 saves on 40 shots for Adirondack…. Mitch Gillam (4-4-0) made 16 saves on 19 shots for Worcester…. Eamon McAdam was the backup goalie…. Worcester went 1-for-4 on the power play while Adirondack went 0-for-4…. Wade Murphy, Nick Saracino (inj), Ashton Rome (inj), Josh Monk (inj), and Connor Doherty 9inj) did not dress for Worcester….Chris Langkow wore the captain C for the Railers due to Rome’s injury….Langkow now has a four-game point streak (3-4-7)…Matty Gaudreau has four assists in his last three games…Mitch Gillam picked up an assist on the game winning goal….Kyle McKenzie picked up a fighting major with a third period tussle vs. Eric Neiley.

On Saturday, Dec 16 the Railers return home on a BIG GAME SATURDAY on Star Wars Night to benefit the Shine Initiative presented by Fidelity Bank.  The Railers will wear a specialty Star Wars jersey and there will be Star Wars characters in attendance!  Puck drop is 7:05pm vs. the Adirondack Thunder.  Call 508-365-1750 to score tickets!