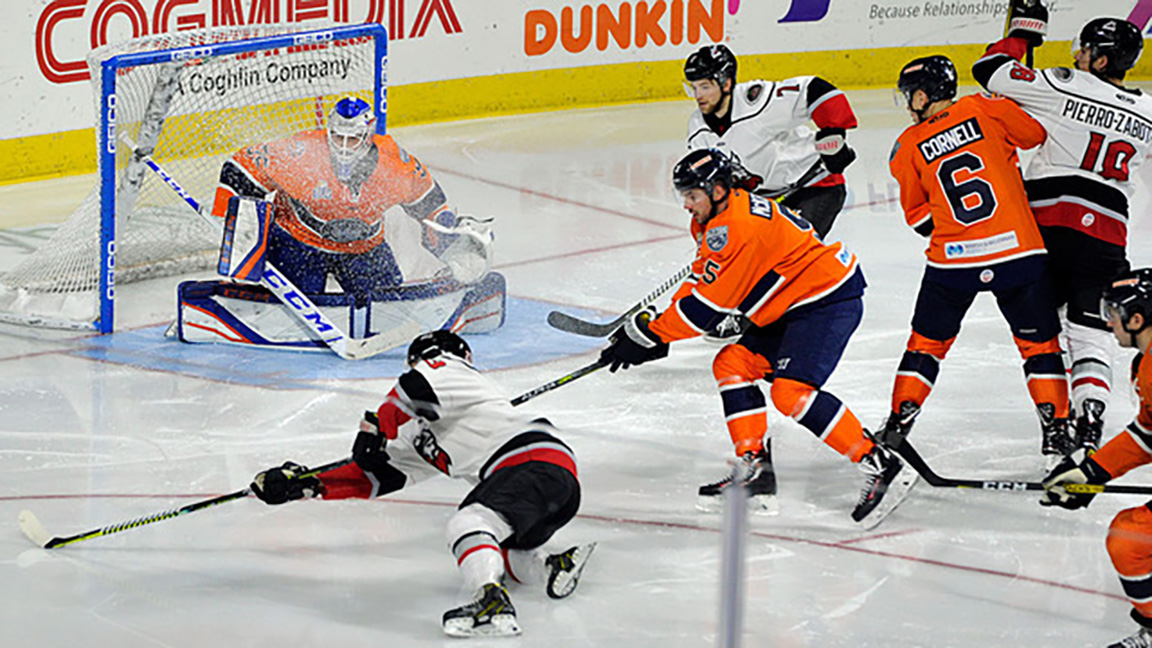 Meeting 7 of 14 vs. Brampton this season

Worcester, MA– The Worcester Railers HC (4-10-0-0, 8pts) dropped their fifth straight game in a 4-1 loss to the Adirondack Thunder(8-7-0-2, 16pts)on Kid’s Giveaway Sunday in front of 4,351 fans at the DCU Center. The Railers will be back in action Tuesday, Nov 26 traveling to Portland, ME to take on the Maine Mariners at 7pm.

Barry Almeida scored the lone goal for Worcester as Jakub Skarek made 30 saves on 33 shots in the loss for the Railers. Hayden Verbeek, Blake Thompson, James Henry, and Ryan Walker all scored for Adirondack while Eamon McAdam made 22 saves on 23 shots for his third win of the season.

Although Adirondack struck just 51 seconds into the second period thanks to Hayden Verbeek (2nd), Barry Almeida (4th) would tie things up at 3:42 after receiving a beautiful feed from Dante Salituro from below the right circle. Ross Olsson (3rdFM) and Alex Carrier (1stFM) would square off for the first fight of the game as Olsson challenged Carrier after Carrier got tangled up with JD Dudek. With just 2:51 left in the period Kelly Summers dished a dirty hit on Barry Almeida and Mike Cornell (1stFM) stepped in and scrapped with Kelly Summers (2nd). Adirondack outshot Worcester 13-4 in the stanza and held an overall shot advantage of 22-13 through 40 minutes of play with the game tied at 1-1.

Adirondack scored their first goal of the third period as Blake Thompson (1st) slid one past the blocker of Jakub Skarek to give the away team a 2-1 lead. After James Henry (4th) received a pass from the right circle he snapped one of from the high slot beating Skarek on the far side with just 4:21 to go in regulation. Ryan Walker (3rd) provided the icing on the cake with an empty net goal with 1:43 to go in regulation. The Railers 4-1 loss marked their fifth straight time overall and a franchise record fifth straight home loss.

Notes: Three Stars: 3rd star…. Justin Murray (0-0-0, 1 shot) 2nd star: Blake Thompson (1-0-1, +3) 1st star: Hayden Verbeek (1-1-2, 5 shots) …. final shots were 34-23 in favor of Adirondack…. Eamon McAdam (3-5-1) made 22 saves on 23 shots for Adirondack.… Jakub Skarek (2-3-0) made 30 saves on 33 shots for Worcester while Evan Buitenhuis served as the backup …. Worcester went 0-for-2 on the power play while Adirondack went 0-for-5…. Mike Cornell led all skaters with 19 penalty minutes…. Dante Salituro made his Railers debut and recorded an assist…. Barry Almeida scored his 48thgoal as a Railer….. Mike Cornell and Nic Pierog played in their first games since being reassigned from Bridgeport…. Worcester now has nine fighting majors, seven of which are against Adirondack….The Railers have dropped nine of their last 10 games and have been outscored 21-51 in the process…. Tanner Pond (inj), Anthony Florentino (inj), Shane Walsh (inj), Drew Callin, and Yanick Turcotte did not dress for Worcester…. The first 1,000 kids 12 and under received a youth jersey courtesy of Energy Monster….Linus Soderstrom is currently on recall with the Bridgeport Sound Tigers…. Worcester is now 18-10-2 all-time vs. the Thunder and 7-5-1-0 at the DCU Center.

On Tuesday, Nov 26 the Railers head to Portland, ME to battle the Maine Mariners at 7pm.  Coverage begins live at 6:35pm on 98.9 Nash Icon.

On Wednesday, Nov 27 the Railers host the Newfoundland Growlers at 7pm on a 2-3-4 Weekday.  Score $2 popcorn, $3 soda, and $4 Bud Light in the Bud Light Lounge! Show your Price Chopper Market 32 Advantedge Card at the Box Office for a $5 discount on all tickets purchased.

On Saturday, Nov 30 the Railers host the Indy Fuel at 7pm on a BIG GAME SATURDAY on Nickelodeon Night!  The first 1,000 fans will receive a slap bracelet courtesy of APEX Entertainment. The Railers will wear a special SpongeBob SquarePants jersey which will be auctioned off throughout the game to benefit the Railers Foundation.  Saturday Night Signings will feature a Railers player(s) signing autographs during the first intermission in the Fallon Health Pavilion.Bring a group of 10 or more people to the game and save BIG $$$$ off Box Office pricing and receive a Railers hat for everyone in your group! Plus, score a Railers experience…Zamboni rides, High-Five Tunnel, post-game photo on ice, and more!  Call 508-365-1750 for your customized group experience!

Spend Thanksgiving Week with the Worcester Railers
Scroll to top