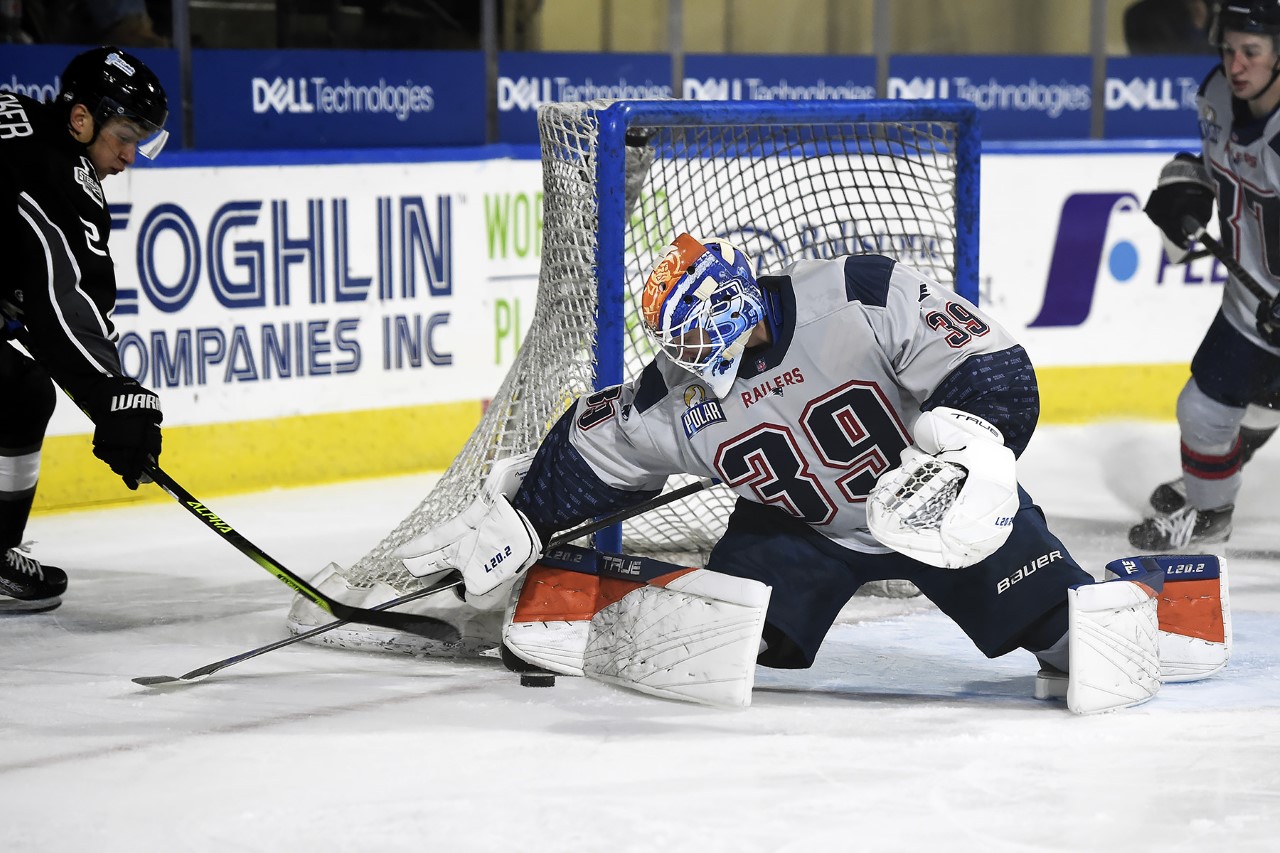 WORCESTER – The season is too young for any game or series to be a playoff preview, but this weekend’s DCU trifecta involving the Railers and Idaho Steelheads looked like a barometer to measure the merits of the ECHL’s best eastern team and its best western one.

The west is winning, with Idaho taking both of the weekend’s first two games by big margins.

Saturday night’s was a 4-1 triumph and the Steelheads have outscored Worcester, 9-2, in the two games. The Railers have lost four in a row and are no longer a first-place team. Newfoundland won Saturday and has moved two points ahead of Worcester in the North Division.

The Railers have scored just one goal in each of their four defeats. Saturday night’s was by Quin Ryan and gave Worcester an early lead but the Railers could not get another one.

Despite the score, the Railers played a much better game than Friday night and coach Jordan Smotherman thought his team took a step in the right direction.

“I thought that with the exception of tonight,” he said, “we weren’t playing the right way. I thought tonight we did play the right way but we didn’t capitalize on our chances. The guys came with the right attitude, they worked hard, but we just didn’t get the bounces.”

The Railers shook off Friday night’s lethargy with a strong start to the first period and played a solid 20 minutes overall to open the game. They almost made it 1-0 at 6:51 when Nolan Vesey sliced down the slot alone but was stopped by Steelheads goaltender Remi Poirier, who had an excellent night with 35 saves.

However, the play drew a hooking penalty by Colten Kehler and Worcester capitalized on the power play at 7:34. Ryan rammed a low shot past Poirier from about 15 feet out, set up by Liam Coughlin’s pass from behind the goal line.

The Railers continued to have the best of things until the game was more than half over. Worcester had a couple of great chances to add to its lead in the early minutes of the second period but could not finish.

Blake Christensen made a couple of nice moves to provide himself with an open shot from about 12 feet out at 3:15 but Poirier got a piece of it. Anthony Repaci had a breakaway at 8:00 but missed the net on a backhand try.

The Steelheads capitalized on that reprieve by scoring three goals in about six minutes, the first two on power plays, the third on an odd-man rush for the Steelheads.

Headrick tied the game at 12:13 with a shot from the left point. Kudla put Idaho ahead at 15:58 from the left circle and Dmowski slipped a shortie past Tikkanen at 18:22, set up by Jade Miller.

Dmowski’s goal was the most damaging one of the night. Worcester forward Reece Newkirk was tripped into the boards behind the Idaho net and the Steelheads finished the long odd-man rush nicely.

The kind of night it was for the Railers was typified by the third-period stats. Worcester had 14 shots and no goals. Idaho had one shot, and Pelton-Byce put it in behind Henrik Tikkanen at 8:50 to make it a 4-1 game.

MAKING TRACKS – Down by 4-1, the Railers had a power play at 12:22 of the third period and Smotherman replaced Tikkanen with an extra attacker for part of it. … Former Sharks executive and current Worcester State University athletic director Mike Mudd was at the game. … Three Railers were not in uniform. That list included Billy Jerry, Derek Osik and Jack Quinlivan. … A scoring adjustment from Friday night changed Idaho’s Wade Murphy from plus-5 to plus-4, still a notable number. … The teams play Sunday afternoon at 3:05 and are done for the regular season after that. … Attendance was 4,522.