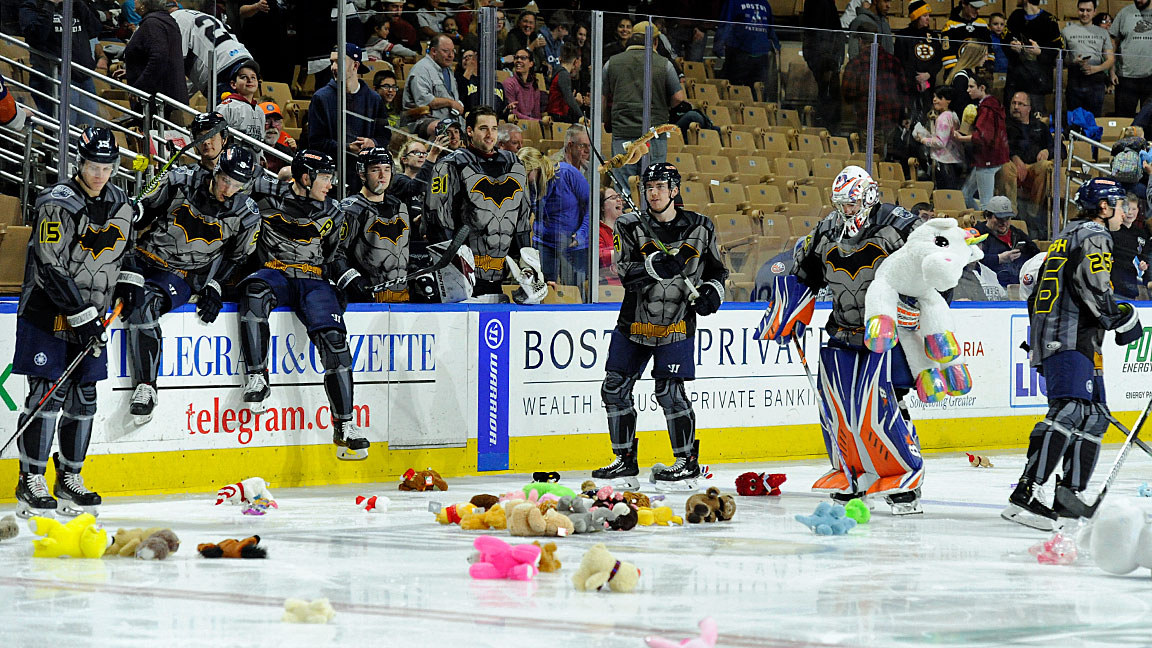 Meeting 4 of 18 vs. Maine this season

It took 2:13 for the teddy bears to fly on Saturday night

Worcester, MA – The Worcester Railers HC (7-15-1-0, 15pts) picked up a big 3-2 win on home ice over Maine Mariners (12-10-0-1, 25pts) on Saturday evening in front of 4,121 fans at the DCU Center on Batman Night as well as the annual Teddy Bear Toss. The Railers will be back in action at the DCU Center Sunday, Dec. 15 vs. the Reading Royals on a kid’s giveaway Sunday featuring a hard hat courtesy of Rampco Construction at 3pm.

Shane Walsh (2-1-3) paced the way offensively for the Railers while Evan Buitenhuis made 21 saves in net for his fourth win of the season. Ross Olsson netted the other goal for Worcester while Bo Brauer (0-2-2) netted two assists while Yanick Turcotte extended his point streak to two games with an assists Maine received goals from Alex Kile and Zach Tolkinen late in third while Tom McCollum made 23 saves in net for the loss.

It did not take long for the teddy bears to fly as Jordan Samuels-Thomas sent a pass from behind the net to the high slot finding the stick of Shane Walsh (2nd) who sent it by the glove of goaltender Tom McCollum 2:13 into the opening period. Just moments later Ross Olsson (4th) on the near side post lifted a back hand over the glove of McCollum at 5:33 to give the Railers a 2-0 lead. Worcester took the 2-0 lead into the dressing room after 20 minutes of play and outshot Maine 11-3.

The physical play began to pick up in the second period and after an altercation between JD Dudek and Ryan Ferrill, Justin Murray (2ndFM) dropped the gloves with Ryan Ferrill (1stFM) at 9:39. Both were given fighting majors but Murray was assessed a game misconduct for not having his jersey strapped. Maine went on the power-play while JD Dudek also sat two minutes for slashing but the Mariners would not convert. Maine held Worcester to just three shots in the second period but Worcester still held the advantage 14-12 and a 2-0 lead after 40 minutes of play.

Shane Walsh (3rd) started the rush up ice on a three on two and eventually followed up a rebound and jammed it past McCollum to give Worcester a 3-1 advantage at 6:50 of the third period. After Maine received goals from Alex Kile at 8:43 and Zach Tolkinen at 12:18 the Mariners pulled McCollum with about two minutes to go but the Railers came up big defensively to pull out the 3-2 victory on home ice.

Notes: Three Stars: 3rd star…. Justin Murray (0-1-1, FM) 2nd star: Bo Brauer (0-2-2) 1st star: Shane Walsh (2-1-3) ….final shots were 26-23 for Worcester…. Tom McCollum (5-5-0) 23 saves on 26 shots for Maine.… Evan Buitenhuis (4-8-0) made 21 saves on 23 shots for Worcester while Ian Milosz served as the backup…. Worcester went 0-for-2 on the power play while Maine 0-for-2…. Cody Payne, Drew Callin, Ivan Chukarov, Anthony Florentino, and Tanner Pond (inj) did not dress for Worcester…. Mike Cornell, Jakub Skarek, and Linus Soderstrom are currently on recall with the Bridgeport Sound Tigers…. Evan Buitenhuis made his seventh straight start in net…. Shane Walsh (2-1-3) recorded his first multi-point game of the season…. Yanick Turcotte extended his point streak to two games with an assist and now has three assists in his last four games…. Justin Murray registered his second fight of the season….. The Railers held the Mariners to just three shots in the first period which tied a season low…. The Railers wore Batman jerseys while the Mariners wore Joker jerseys….Worcester is now 6-5-4-3 all-time vs. the Mariners and 5-2-2-1 at the DCU Center.

What’s on tap – Back at the DCU Center!