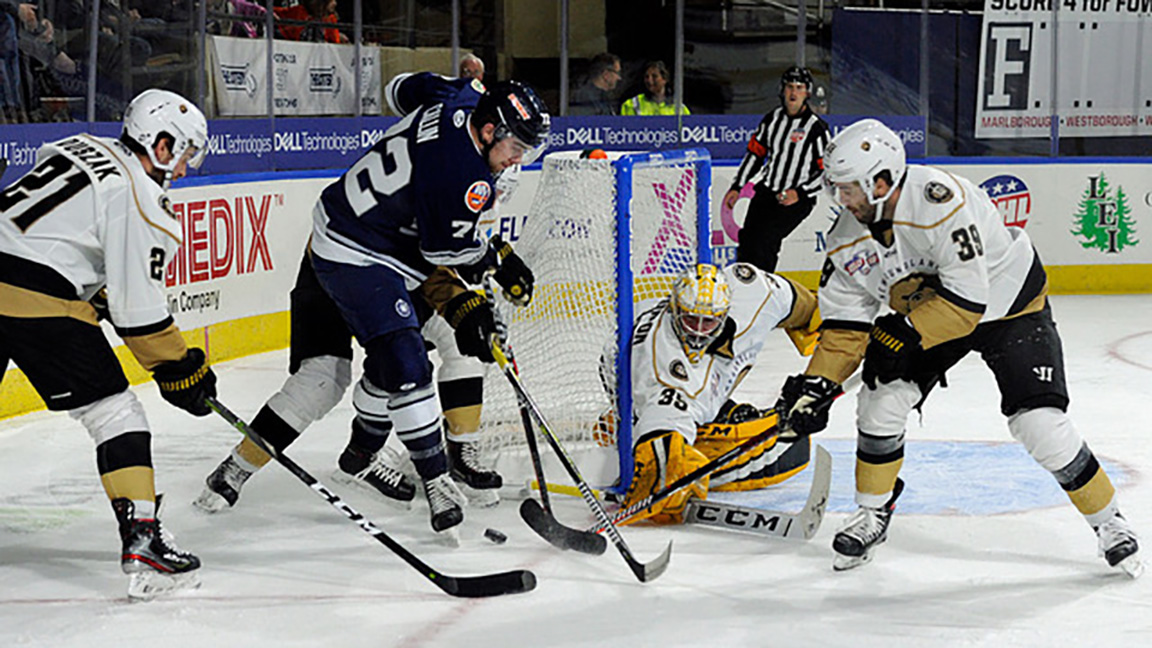 Meeting 1 of 9 vs. Newfoundland this season

Worcester, MA– The Worcester Railers HC (3-4-0-0, 6pts) dropped their third straight game and fell 5-2 to the Newfoundland Growlers (5-4-0-0, 10pts)on Friday evening in front of 2,919 at the DCU Center. The Railers are back in action on Saturday, November 2 at the DCU Center for W6 Tribute Night with a Guns N’ Hoses Game before the Railers hit the ice vs. the Adirondack Thunder for a 7pm puck drop.

The Railers got goals from Barry Almeida and JD Dudek but a four goal second period from the Growlers would lift the away team to victory. Linus Soderstrom allowed five goals on 37 shots in net for Worcester as the Railers were assessed for 42 penalty minutes in their first home loss of the season. Riley Woods scored twice for the Growlers while Scott Pooley and Matt Bradley each had a goal and assist while Patrick Munson made 29 saves in net for Newfoundland in their road victory.

The Railers went on the power play at 5:50 into the opening frame and just 20 seconds later Barry Almeida (2nd) found the back of the net on the near side post sending it past Patrick Munson with Matt Schmalz and Jordan Samuels-Thomas picking up the assists. Linus Soderstrom was perfect in net for Worcester through the first 20 minutes stopping all 12 shots he faced. The Railers outshot the Growlers 13-12 in the opening frame.

There was an outbreak of offense in the second period as the Growlers were able to strike at 1:33 as Riley Woods (5th) was able to convert on a two on one making it a 1-1 game. Newfoundland would take a 3-1 lead with goals from Matt Bradley (3rd) at 4:22 and Scott Pooley (6th) at 6:57. Just seven seconds later  JD Dudek (2nd) ripped a laser of a wrist shot from the left circle beating Growlers netminder Patrick Munson. The scoring was not over however as Newfoundland took back a two-goal lead with a rebound goal from Giorgio Estephan (5th) at 14:33. Newfoundland outshot the Railers 10-7 in the period and held a 22-20 advantage in shots and took a 4-2 lead into the second intermission.

Frustration continued for the Railers as Yanick Turcotte received a five minute game misconduct on a kneeing major in the third period. The Growlers netted the lone goal of the third period as Riley Woods (6th) was able to pot his second of the game on a rebound effort at 9:23 on the power play. Ross Olsson recorded his first fight of the season as he took down Giorgio Estephan with just 56 seconds left in the contest and received an instigator and a game misconduct for his troubles.

Notes: Three Stars: 3rd star…. Matt Bradley (1-1-2) 2nd star: Joey Duszak (0-2-2) 1st star: Riley Woods (2-0-2)…. final shots were 37-31 in favor of Newfoundland…. Patrick Munson (2-1-0) made 29 saves on 31 shots for Newfoundland.… Linus Soderstrom (1-2-0) made 32 saves on 37 shots for Worcester while Evan Buitenhuis served as the backup…. Worcester went 1-for-3 on the power play while Newfoundland went 2-for-6…. Ivan Chukarov (inj), Ryan Hitchcock (inj), Shane Walsh, and Chris Rygus did not dress for Worcester…. Mike Cornell, Nic Pierog, and Jakub Skarek are currently on recall with the Bridgeport Sound Tigers…. Ross Olsson recorded a game high 17 penalty minutes…. Jake Bolton and JD Dudek led Worcester with four shots a piece…. The Railers have allowed 16 goals in their last three games…. Worcester is now 3-6-0-0 all-time vs. the Growlers and 2-3-0-0 at the DCU Center.

The Railers are back at home on Saturday, Nov 2 for W6 Tribute Night with a Guns N’ Hoses game at 4:15pm. The Worcester Police will take on the Worcester Fire with Ray Bourqueplaying a half for each team courtesy of Berkshire Bank. The Worcester Railers will wear a special W6 Tribute jersey to be auctioned off during and after the game with proceeds to be donated to the Worcester Fire Department and their charities. Fans not attending the game may bid on the jerseys through the HandBid App or www.HandBid.com.