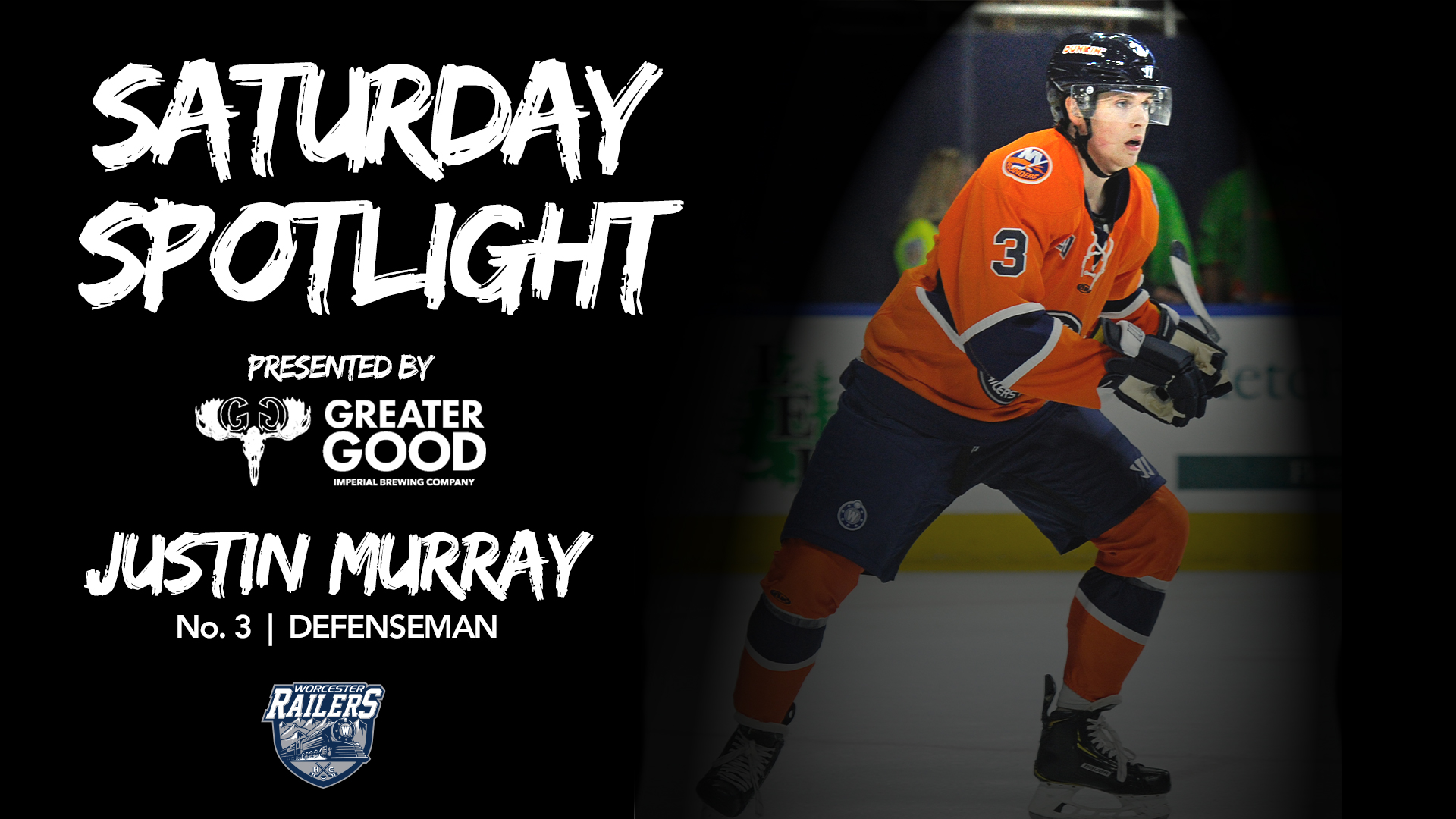 Hey Railers fans, Cam McGuire here checking in from Milwaukee, WI where I’ve been for 29 daysnow…but who is counting… wait is 29 days a long time? Today I bring you our third “Saturday Spotlight” presented by Greater Good Imperial Brewing Company.This week, I caught up with the one…the only…Justin Murray a.k.a the “Murr Dog” who is back home in London, ON.

After spending four successful seasons in the Ontario Hockey League (OHL), mostly with the Barrie Coltsbut also with the Saginaw Spirit, the 20-year-old defenseman signed a contract with the Bridgeport Sound Tigers at the end of June.

“It was a pretty surreal moment to be able to sign my first pro contract with Bridgeport last year,” Murray said.“To be honest I had never been to Connecticut or Bridgeport for that matter but had heard nothing but great things about the Sound Tigers organization.” 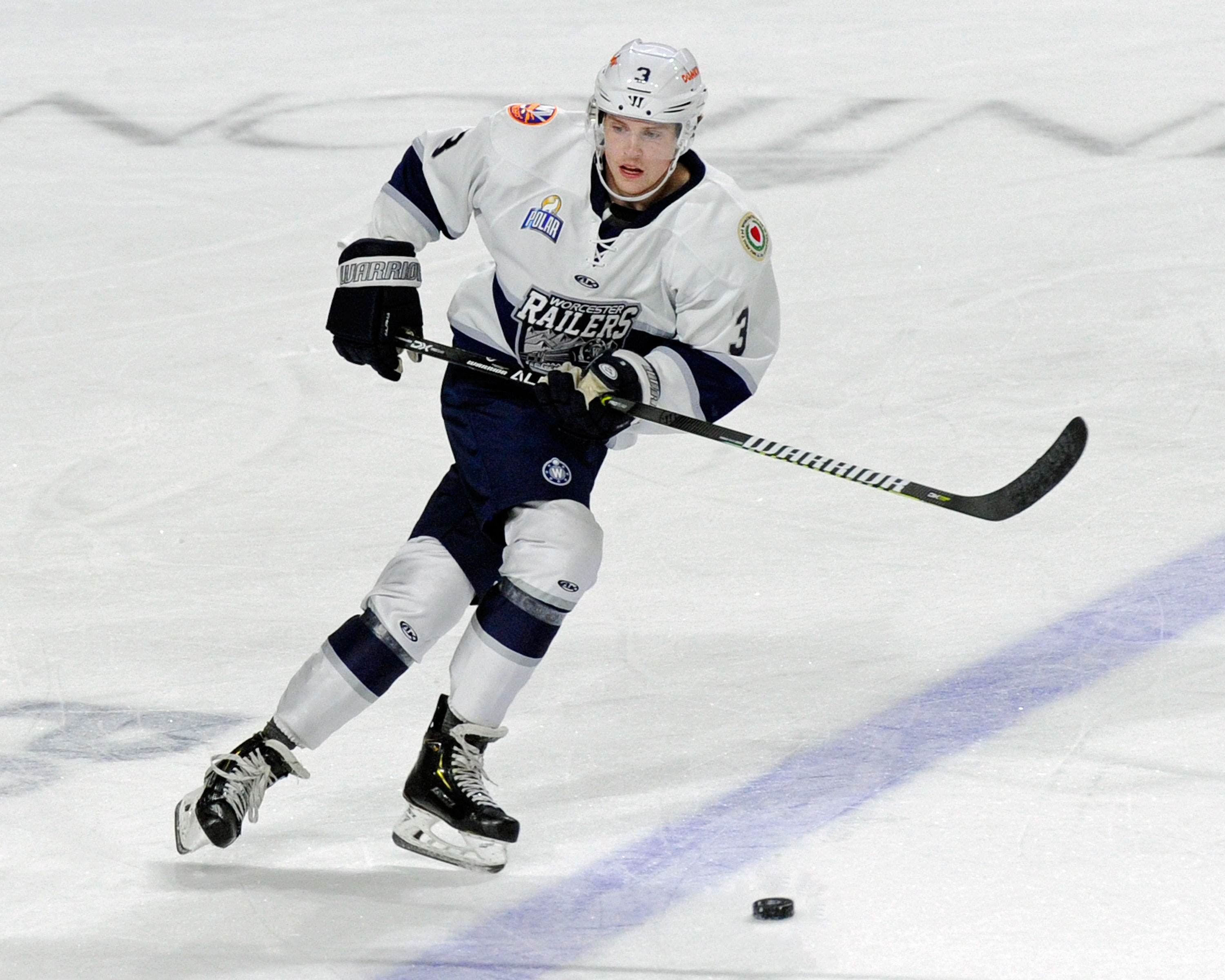 “Last September was a great experience for me,” Murray said. “From going to my first NHL training camp to playing to an AHL exhibition game, I was just trying to soak it all in and learn as much as I could.”

Justin Murray finished as the team’s “Iron Man,” having played in 51 consecutive games to end the season. Hespent a good majority of his playing time teamed up on the blueline with either second-year pro Ryan MacKinnon or veteran Mike Cornell.

“Well that was huge in my development,” Murray said. “Having guys like MacKinnon and Cornell who took me under their wing and showed me the ropes was very instrumental. Having guys that have gone through it already and really exemplify what it means to be a pro was beneficial to me as the year went on.”

Murray, like many other Railers players, not only played a key role on the ice but also off the ice appearing in numerous community events. The six-foot defenseman was never shy to volunteer for community events,including a Jr. Railers practice and Skate to Success. The Murr Dog admitted he may have had more fun than some of the kids!

It’s been about a month since Murray packed up his bags and headed back to London, ON, and like many of us,he has been staying home and enjoying time with family.He’s also enjoying catching up on TV shows, doing some home workouts to stay in shape, and even working around the house.

Getting back in the gym and improving his strength for next season will be a key priority for #3 once this all passes…but in the mean time, I fired some Q and A’s with Murr to learn more what he’s like off the ice.

Favorite restaurant in Worcester: The Fix… a bunch of specialty burgers there and you can’t go wrong with any of them.

Pick one teammate to be quarantined with: I wouldn’t mind being quarantined with any of the guys on the team but if I had to pick one it would be Drew Callin… never a dull moment with him.

If you could be a professional athlete in another sport,what would it be: Baseball. I enjoy watching baseball especially when it gets into the playoffs, it’s always electric.

Favorite hockey memory:There’s so many great hockey memories that it’s hard to pinpointone as my favorite but any good playoff runs I’ve had would be at the top of the list.

Favorite song: It’s a Great Day to be Alive by Travis Tritt. I’d always have the song blasting in my apartment this year… I think my roommates may have gotten sick of it.

How did you get the nickname Murr Dog: Not really sure how I got the nickname or who gave it to me but there are a select few that use it regularly.

One person you’d like to meet: Will Ferrell. All of his movies ae hilarious and I’m sure we it would be pretty funny to meet him.

When was your first hockey fight: My first real hockey fight was my first year of junior playing for the London Nationals in 2014 during a pre-season game in Stratford, ON against the Stratford Cullitons.

Who’s the guy you want on your team but hate to play against: This one is easy, luckily, he was on my team this year… Yanick Turcotte.

Favorite vacation spot: Last summer I went to a resort in Mexico and it was unbelievable…I will be going back there for sure.

Be sure to check back next Saturday for our next “Saturday Spotlight!” Let me know who you want to see featured by shooting me an email at camm@railershc.com!