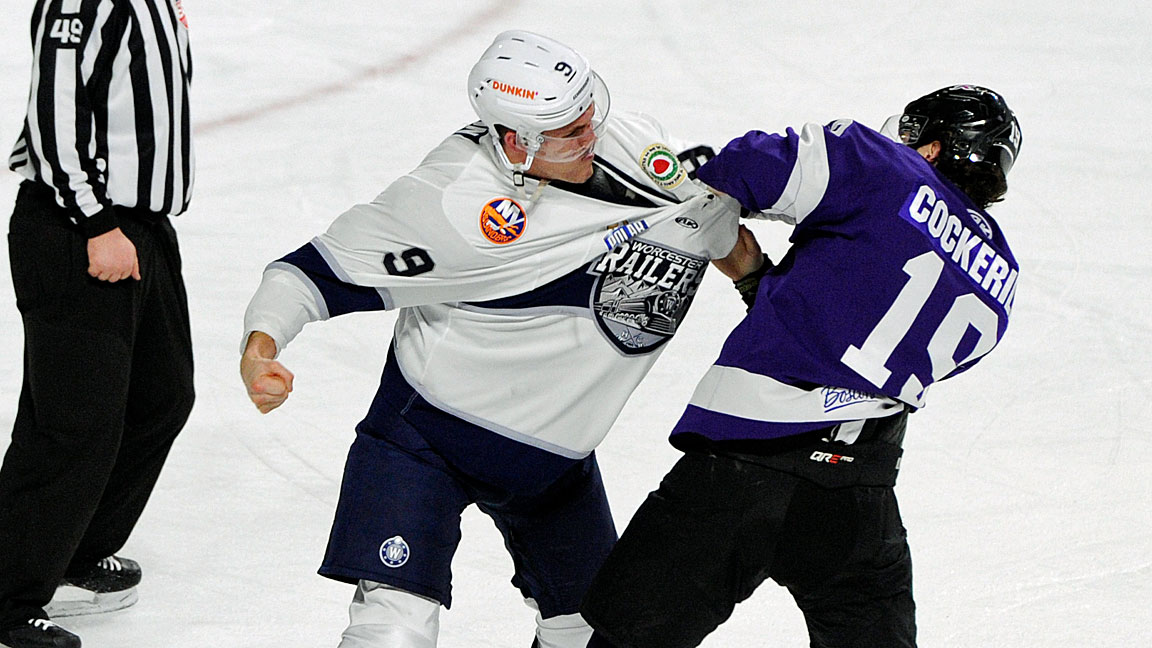 Meeting 9 of 13 vs. Reading this season

The first period was filled with 49 total penalties and a pair of goals as the teams were tied at 1-1 but then in the second period Reading scored a total of five goals in a 4:19 span to take a 6-2 lead after 40 minutes of play. Trevor Gooch (2-0-2) had his second straight multi goal game while Jeremy Beaudry (0-4-4) led all skaters in points. Kirill Ustimenko recorded his 18thwin of the season making 37 saves. Arnaud Durandeau and Barry Almeida each scored goals for Worcester while Evan Buitenhuis made 26 saves in net for the loss.

Barry Almeida (12th) would get Worcester on the scoreboard at 5:43 of the first period after an initial shot from Jack Macnee from the right point that was blocked down and found the stick of the captain who sent it past Kirill Ustimenko to give Worcester a 1-0 lead. After Nic Pierog and David Drake got tied up in an altercation behind the Reading line Pierog was assessed 17 total penalty minutes receiving a game misconduct while Drake got nothing. Reading went on a seven-minute power-play and it would be Garrett Mitchell (10th) who tied the score at 1-1 at 11:18. The teams headed to the dressing room through 20 minutes of play as Reading outshot Worcester 12-11.

Trevor Gooch (10th) gave Reading a 2-1 advantage 2:52 into the second frame and then Brayden Low (11th) just 63 seconds would increase the lead to 3-1. After a shot attempt from Shane Walsh that was blocked Arnaud Durandeau (4th) came up with a free puck in the right circle and sent it by Kirill Ustimenko to decrease the deficit down to 3-2 at 4:21. The Royals would grab would score three unanswered goals first Matt Strome (4th) at 5:10 then Steven Swavley just 26 seconds later and it was all capped off by Trevor Gooch (11th) to make it a 6-2 Royals lead with 12:49 to play in the stanza. The second period featured just one power-play as Reading led 6-2 through 40 minutes of play.

The third period featured no scoring as the Railers had two power-play opportunities but could not convert as they outshot Reading 15-6 but would end up losing 6-2.

Notes: Three Stars: 3rd star: Kirill Ustimenko (37 saves, Win) 2nd star: Trevor Gooch(2-0-2, +3) 1st star: Jeremy Beaudry (0-4-4) …. final shots were 39-32 in favor of Worcester….Kirill Ustimenko (18-4-5) made 37 saves on 39 shots for Reading…. Evan Buitenhuis (11-15-1) made 26 saves on 32 shots for Worcester while Jakub Skarek served as the backup….Worcester went 0-for-5 on the power play while Reading went 1-for-4…., JD Dudek (IR), Kyle Thomas (IR), Yanick Turcotte (IR), Tanner Pond (IR), Ivan Chukarov, and Kyle McKenzie, Dylan Sadowy (TRV) did not dress for Worcester…. Mike Cornell, David Quenneville, Linus Soderstrom, and are all with the Bridgeport Sound Tigers…. Jordan Samuels-Thomas was suspended by the club on Thursday as he has left to pursue opportunities in Europe…. Jack Macnee made his Railers debut and collected an assist…. Ross Olsson recorded his team leading sixth fighting major of the season…. Barry Almeida led all skaters with seven shots on net…. Nic Pierog led all skaters with 17 penalty minutes…. Worceser is just (1-8) in their last nine games…. the Railers are now 13-17-1-0 under GM/coach Cunniff…. The Railers are now 16-12-1 all-time vs. the Royals and 9-4-1-0 at the DCU Center….

What’s on tap – On the Road in Portland For Two Games!

On Tuesday, Feb 4 the Railers hit the road to take on the Maine Mariners at 7pm and then once again on Friday, Feb 7 vs. the Mariners at 7:15pm.

PINK IN THE RINK WEEKEND!