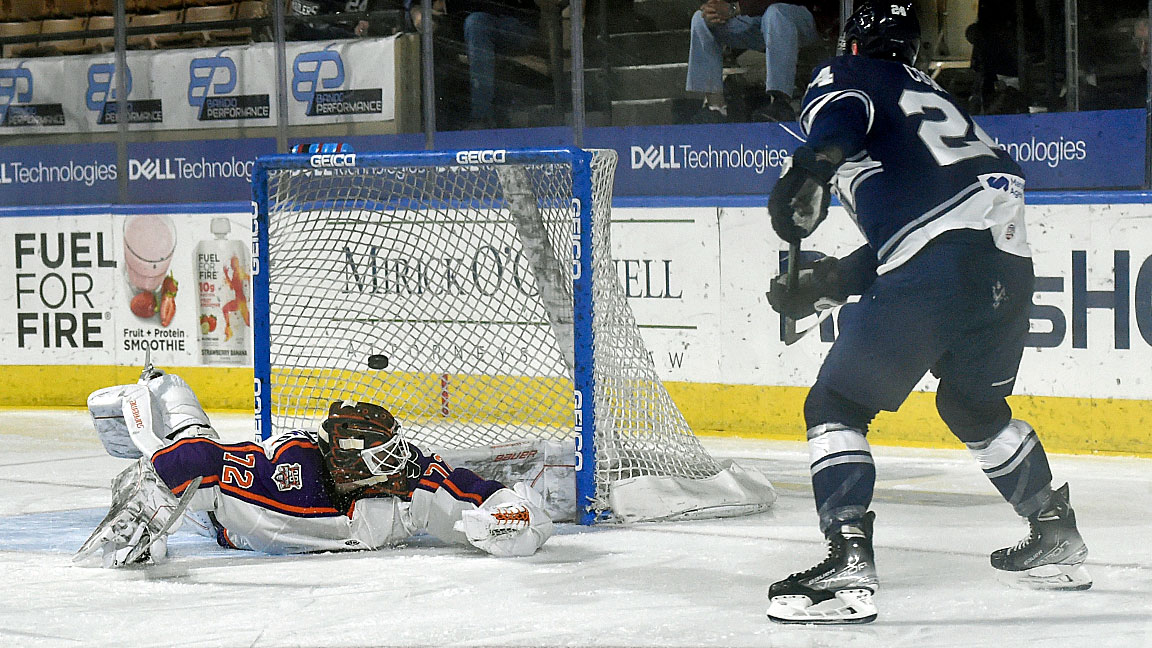 Royals Roar Too Loud as the Railers Lose 6-3

What they did not see was a victory by the home team as Worcester was beaten by the Reading Royals, 6-3, the last goal going into an empty net.

The history involved penalty shots. Each team had one, and made one, in the second period. It was the first time in franchise history there was more than one penalty shot in a game, let alone a period.

There is more history on the horizon and on a larger scale. The Railers have now played 27 games this season and have not won two in a row. The Worcester pro record in that category is 30 games, done by the IceCats in 1997-98. The Sharks went 29 games between two-in-a-row in 2012-13.

Cole Coskey made the Railers penalty shot at 5:43 of the second period. Thomas Ebbing, who had two goals, beat Ken Appleby at 16:09 that period. Coskey was 1-2-3 and is 2-3-5 in four games since being sent to Worcester by the Bridgeport Islanders. He was scoreless in his first Railers game, so is  2-3-5 in the last three.

“He is a stud,” coach David Cuniff said. “He’s here to find his game. That’s what this is all about, our affiliation with the Islanders. He’s really getting relied on and he’s produced for us. That kid can be a monster. We’ll create a monster and he’ll be gone after two good games.”

Brent Beaudoin and Charlie Spetz had the other Worcester goals. Beaudoin was 1-1-2 for the second straight game.

Ebbing’s penalty shot was a debatable call for sure. He was slashed on a breakaway and the rule says that if a player is fouled from behind, but is able to recover and have a reasonable scoring opportunity, there is a penalty but no penalty shot.

Ebbing did get off a good shot, which Appleby stopped. The definition of “reasonable” is hard to nail down and Wohlford decided in Reading’s favor.

Anthony Gagnon gave Reading a 1-0 lead at 11:50 of the first period. Spetz tied it at 1-1 at 17:42 with probably the Railers’ longest goal of the year, not counting empty netters. He took a pass from Coskey and drilled home a slap shot from the very top paint of the blue line.

The wild second period followed with Coskey giving Worcester an early lead on his penalty shot. The Railers sagged, however, right after that and the Royals scored at 6:13 (Brad Morrison), 9:46 (Kenny Hausinger) and 16:09 (penalty shot).

Morrison’s goal came just 30 seconds after Coskey’s and seemed to kill the Railers.

Worcester got a shot of late energy, though, when Beaudoin scored at 18:11 on what looked like an innocent 40-foot wrist shot from the left boards.

Ebbing scored at 9:56 of the third, then Brayden Low hit the empty net with nine seconds to go.

The game marked yet another pro debut in a Railers uniform. Defenseman Austin Osmanski took a turn on defense after being assigned by Springfield. Osmanski is 6-foot-4, 204 pounds and most recently played for Western University in Canada.

He is a native of East Aurora, N.Y. but is not the most reknown personality from that town. President Millard Fillmore, whose in-laws were from Whitinsville, spent most of his life in East Aurora.

Osmanski was one of seven defensemen in the Railers lineup. Worcester was without captain Jordan Lavallee-Smotherman once again. He remains on the Commissioner’s Exempt List.

MAKING TRACKS_ Reading provides the opposition again on Saturday night. The puck gets dropped at 7:05. … Ross Olsson was back in the lineup after missing a game due to suspension. …All-time, the Railers are 4 for 9 on penalty shots including 3 for their last 4. The scorers have been Chris Langkow, Jordan Samuels-Thomas and Drew Callin. Opponents are 4 for 8, and also 3 of their last 4. … Reading goalie Kirill Ustimenko has won his last seven starts versus Worcester and is 8-2-1 lifetime against the Railers.