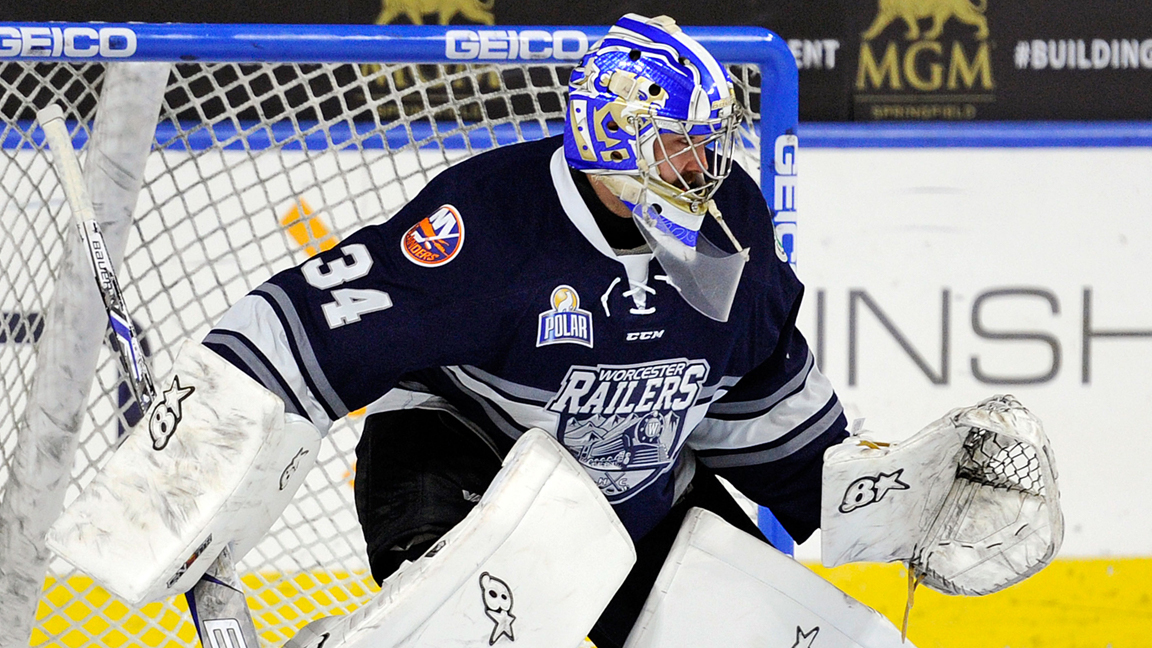 Meeting 1 of 12 vs. Manchester this season

Manchester, NH – Woody Hudson (1-2-3) recorded three points and Evan Buitenhuis made 33 saves in his first professional start as the Worcester Railers HC(3-2-0-0, 6pts) defeated the host Manchester Monarchs (2-3-0-1, 5pts) by the score of 4-3 in front of 1,668 fansat the SNHU Arena on Friday evening. The Railers three game road trip concludes Saturday with a 7pm faceoff vs. the Thunder in Glens Falls, NY

Nick Bligh, Josh Holmstrom, Woody Hudson, and Bryan Arneson all found the back of the net for Worcester while Evan Buitenhuis made 33 saves in net in his first professional start for his first pro win.  Worcester trailed 1-0 and 2-1 before taking a 4-2 lead and held on late for a thrilling one goal road victory.

Manchester grabbed the only goal in the opening frame as Tony Cameranesi (5th) with a quick shot as the power play expired from the left slot at 5:25.  Evan Buitenhuis made 11 first period saves as the Railers headed into the first intermission down 1-0 through 20 minutes of play.

Nick Bligh (2nd) tied the score at 1-1 with a rebound strike from the side of the crease at 11:23 with the Railers on a two-man advantage assisted by Woody Hudson and Alex Vanier.  Manchester would answer back with a two-man advantage goal of their own as Tony Cameranesi (6th) ripped home another strike at 17:27.  Just 70 seconds later, captain Mike Cornell steamed down the left wing side and sent a pass in front that found Josh Holmstrom (3rd) racing down the middle and flipped a shot over the glove of goaltender Charles Williams to tie the score at 2-2.  Shots were 23-17 in favor of Manchester through 40 minutes of play.

Woody Hudson (1st) gave the Railers their first lead of the game with a rebound score at 3:35 of the third period.  Bryan Arneson (1st) added an insurance marker at 10:08 after a nice entry into the zone by Woody Hudson to give the Railers a 4-2 lead.  Evan Buitenhuis was spectacular down the stretch with 12 more saves in the third period as Colton Saucerman (1st) added a goal late for the Monarchs as Worcester held on for the 4-3 road victory.

Notes: Three Stars: 3rd star Woody Hudson (1-2-3) 2nd star: Tony Cameranesi (2-0-2) 1st star: Evan Buitenhuis (33 saves, win)….Final shots were 36-21 in favor of Manchester… Charles Williams (2-2-0-1) made 17 saves on 21 shots for Manchester while Joe Spagnoli acted as the emergency backup….Evan Buitenhuis  (1-0-0-0) made 33 saves on 36 shots for Worcester with Mitch Gillam as the backup..….Worcester went 1-for-5 on the power play while Manchester went 1-for-4…. Tommy Kelley (inj), Yanick Turcotte (inj), David Quenneville (inj), Ivan Kosorenkov (immigration) and Tommy Panico did not dress for Worcester…. Connor Doherty was back in the lineup for Worcester and added an assist… Jeff Kubiak is currently on recall with the Bridgeport Sound Tigers…Nick Bligh extended his point streak to three games (2-2-4) …. Alex Vanier picked up his first point of the season with an assist…the Railers went 5-3-0-0 at the SNHU Arena last season…the Railers are now 1-0-0-0 after a rally Carvel Sundae is eaten in the radio booth during the second intermission.

Game 3 of the three-game road trip will take place on Saturday with a 7pm battle vs. the Thunder in Glens Falls, NY.

The Railers return home on Friday, Nov 2 vs. the Adirondack Thunder on a 2-3-4 Friday! Enjoy $2 popcorn, $3 sodas, and $4 Bud Lights in the Bud Light Lounge.  The Railers will host GUNS N HOSES NIGHT on Saturday, Nov 3 with a special appearance by Ray Bourque presented by Berkshire Bank!  Tickets as low as $15!

Railers fall late 2-1 in Glens Falls vs. the Thunder
Scroll to top