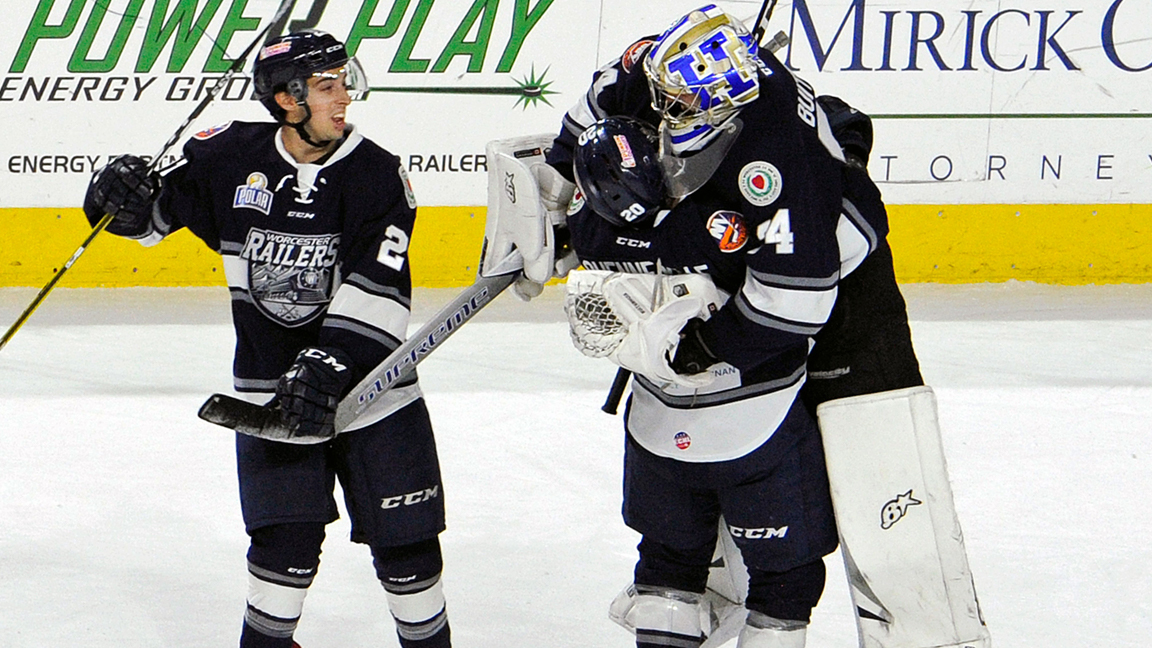 Meeting 4 of 11 vs. Adirondack this season

Evan Buitenhuis makes 36 saves in net for the win

Worcester, MA – The Worcester Railers HC (5-8-1-0, 11pts) picked up their second straight win for the first time this season with a 2-1 shootout victory over the visiting Adirondack Thunder (10-4-0-1, 21pts) in front of 4,049 fans at the DCU Center on Thursday evening. The Railers host the Orlando Solar Bears on a BIG GAME SATURDAY at 7pm with an appearance and signing by NE Patriot Matthew Slater presented by Energy Monster.

Woody Hudson scored in regulation for the Railers while Evan Buitenhuis in his fourth straight start, was spectacular with 36 saves in net. Nick Bligh scored the only goal in the shootout and Buitenhuis stopped all three shooters for the home victory.  Conor Riley scored with just 90 seconds left in regulation to force overtime for Adirondack while Cam Johnson was solid with 24 saves in net in the loss.

Neither team scored in a quickly played first period of play as both teams went 0-1 on the power play. Railers netminder Evan Buitenhuis had 11 first period saves while his counterpart Cam Johnson made eight saves for the Thunder as the two clubs headed into the first intermission in a scoreless tie.

A Woody Hudson (3rd) deflection gave Worcester a 1-0 lead after a nice cycle down low by Matty Gaudreau followed by a quick shot from the right point by Mike Cornell at the nine-minute mark of the second period.  Evan Buitenhuis continued his strong play as he had 20 saves through 40 minutes of play as Worcester took a 1-0 lead into the second intermission.

Adirondack came hard in the third period outshooting Worcester 16-4 in the process and would eventually tie the score with the extra attacker at 18:30 as Conor Riley (7th) banged home a loose rebound to force overtime.

Neither team would score in overtime as the Railers were unable to convert a power play chance in the process. Nick Bligh scored in the third round of the shootout and Buitenhuis stopped all three shooters he faced as the Railers won their second straight game via the shootout.

Notes: Three Stars: 3rd star: Conor Riley (Goal) 2nd star: Nick Bligh (GWG in shootout) 1st star: Evan Buitenhuis (36 saves, Win)….final shots were 37-26 in favor of Adirondack… Cam Johnson (3-2-0-1) made 32 saves on 34 shots for Adirondack and made 2 of 3 stops in the shootout…. Evan Buitenhuis (3-3-1-0) made 36 saves on 37 shots for Worcester and stopped all three shooters in the shootout….while Charlie Millen served as the backup…. Worcester went 0-for-4 on the power play while Adirondack went 0-for-1…. Tommy Kelley (inj), Yanick Turcotte (inj), Connor Doherty, Alex Vanier, Malcolm Gould (inj), Austin Block, and Mitch Gillam (inj) did not dress for Worcester…. Jeff Kubiak is currently on recall with the Bridgeport Sound Tigers….just over 3,000 college student tickets were bought from 10 different colleges/universities leading up to the game…before the game Nichols College defeated Becker College 3-0….the Railers are now 2-0 this season in the shootout with Evan Buitenhuis stopping all six shooters he has faced….the game ended at 10:33pm local time as the start was at 8:05pm for College Night.

On Saturday, Nov 17 the Railers host the Orlando Solar Bears at 7pm on a BIG GAME SATURDAY with NE Patriot Matthew Slater signing autographs presented by Energy Monster from 6-8pm!  The doors will open at 3pm for the Worcester Blades vs. Montreal Canadiens at 3:30pm as US Gold Medalist Hilary Knight takes the DCU Center ice. One ticket gets you entry into both games starting at just $15!

Railers school Royals in shootout in front of 6,043 on Wednesday morning