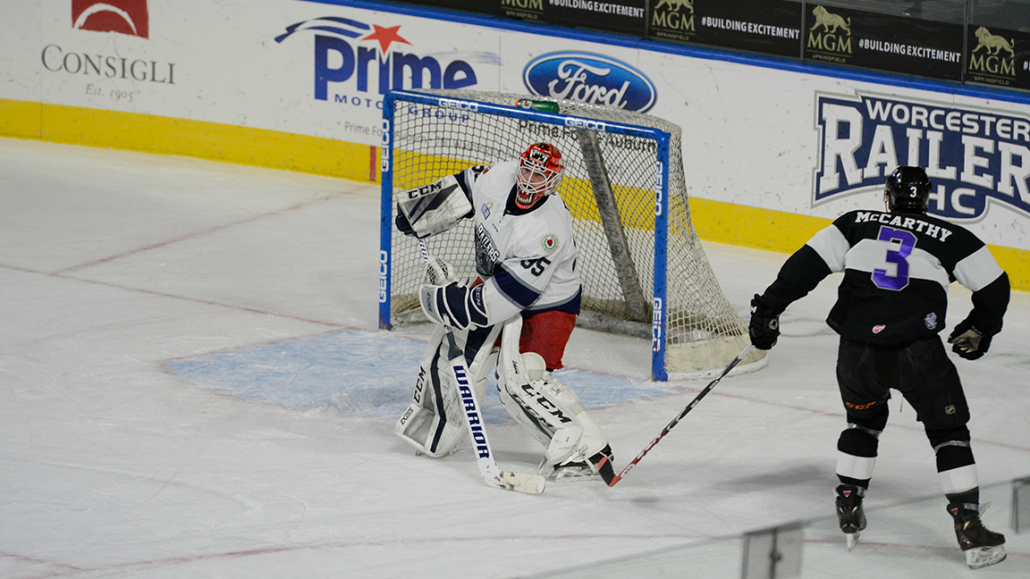 Reading Royals at Worcester Railers HC
December 20, 2017
DCU Center
Meeting 4 of 14 vs. Reading this season
Worcester is 3-1-0-0 vs. the Royals this season

Worcester, MA – Barry Almeida scored the only goal late in the first period as the Worcester Railers HC (11-9-2-2, 26pts) picked up their season high third straight win in a 1-0 victory over the visiting Reading Royals (14-11-2-0, 30pts) in front of 2,511 fans at the DCU Center on Wednesday night.

Mitch Gillam picked up his second shutout of the season with 26 saves in net while Barry Almeida picked up the only score with his sixth goal of the season. Worcester picked up a season high third straight win and improved to 3-1-0-0 vs. the Royals this season.

Shots were 9-6 in the opening frame as the Railers scored the only goal with 24 seconds left in the period as Frankie DiChiara sent a shot from the left wall up high that was deflected in front by Barry Almeida (6th) past goaltender Mark Dekanich. Each team went 0-1 on the power play as Mitch Gillam made six saves for Worcester.

Worcester outshot Reading 11-7 in a scoreless middle period as neither team really had any grade A scoring chances. The Railers led 1-0 through 40 minutes and held a 21-13 shot advantage through two periods of play.

The Royals turned up the heat in the third period as Mitch Gillam made 13 saves to preserve the 1-0 win. Nick Saracino was denied on a breakaway midway through the period as Worcester fired eight more shots in the period.

Railers to give away 200 Christmas Trees at Ernie’s Discount Christmas Trees...Score a Railers specialty STAR WARS themed jersey to benefit the Shine Init...
Scroll to top